A few months ago, we ran the post, “Where the hell has Joseph Gordon-Levitt Been?” Turns out, JGL has just been at home parenting his kids while also making the occasional brief cameo in Rian Johnson’s latest film, Knives Out. He’ll be back soon — in fact, he’s due to star in Aaron Sorkin’s The Trial of the Chicago 7, out in October.

Today, we ask a different question: Where the hell has Tobey Maguire been? Unfortunately, Tobey Maguire has not recently appeared on any podcasts to keep us abreast of his goings-on, and interviews are very rare, so I must resort to Internet sleuthing.

Maguire has been away from the screen even longer than Joseph Gordon-Levitt has. He hasn’t been in front of the camera since 2014’s Pawn Sacrifice in which — ironically — Maguire played Bobby Fischer, the reclusive chess player who disappeared from public life for a couple of decades.

I honestly do not know if it’s related or not, but Maguire stopped appearing in front of the camera in 2014, the same year that Molly Bloom’s Molly’s Game was published. The book was adapted into a mediocre film in 2018, which starred Jessica Chastain, where Michael Cera played a composite character primarily based on Maguire, but the 2014 book specifically names Maguire, and it is incredibly unflattering. Not only did Maguire steal a high-stakes poker game away from Molly Bloom because he was cheap and controlling, but he also verbally abused the hell out of Bloom, making her bark like a seal at one point in order to receive her tip.

The real-life Maguire is essentially the villain in Molly’s Game, and while there are several stories about him in the book, this one basically sums up what a psychotic douche he is.

Is that why he stopped taking roles? Maybe! Because no doubt he would have been asked about that depiction of him in Molly’s Game during the press rounds. However, Maguire wasn’t exactly crushing it, acting-wise, before he disappeared. He’d appeared alongside Leo DiCaprio in The Great Gatsby in 2013, but otherwise, his filmography had been bereft of hits since 2007’s Spider-Man 3, although I thought Jim Sherdian’s 2009 film, Brothers (with Jake Gyllenhaal and Natalie Portman) was fantastic, in part because of how masterfully Maguire played a psychotic douche. That said, another reason he may not appear onscreen as often is because he, reportedly, can be very difficult to work with, which — again — is on full display in Molly’s Game not as an actor on set, but as a poker player.

It also could be that Maguire was going through some personal turmoil. He and his wife of nine years separated in 2016 and divorced in 2017, although they remain friends. Maguire was most recently connected with a 27-year-old model, Tatiana Dieteman, seen here with Maguire in November of 2019. 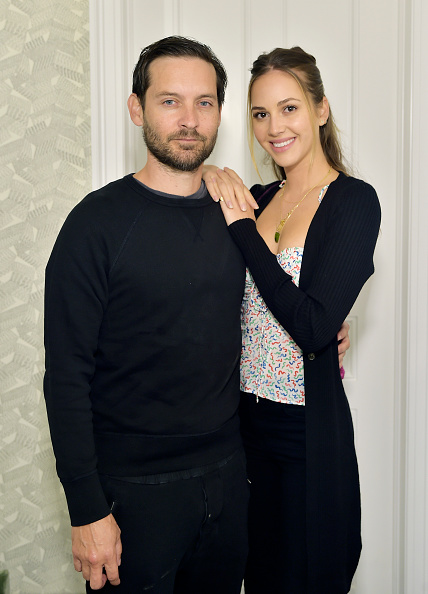 While he doesn’t work in front of the camera these days, Maguire is still busy. He did produce and provide voice work to the 2017 animated hit, Boss Baby, with Alec Baldwin. Moreover, Maguire mostly just produces these days, although his production slate has not yet produced a big break-out hit aside from, arguably, Boss Baby. He produced last year’s The Best of Enemies with Taraji P. Henson and Sam Rockwell, which only earned $10 million at the box office. He also produced Brittany Runs a Marathon for Amazon. He has a few more irons in the fire, including the possibility of another Bruce Willis Die Hard film, and Damien Chazelle’s next film, Babylon with Brad Pitt and Emma Stone.

In the meantime, there are rumors that Sam Raimi — who reportedly will take over as director of the Doctor Strange sequel — may bring Tobey Maguire onto the film, but that’s entirely speculative at this point. Given the fact that both Raimi and Maguire’s careers began to falter with Spider-Man 3, re-teaming would either provide them with an opportunity for redemption or steer them away from comic-book movies once and for all.


← Step Aside, Gwyneth: Erykah Badu is Releasing Incense That Smells Like Her Vagina! | Is this Storyline from 'Riverdale' or 'Manifest'? →