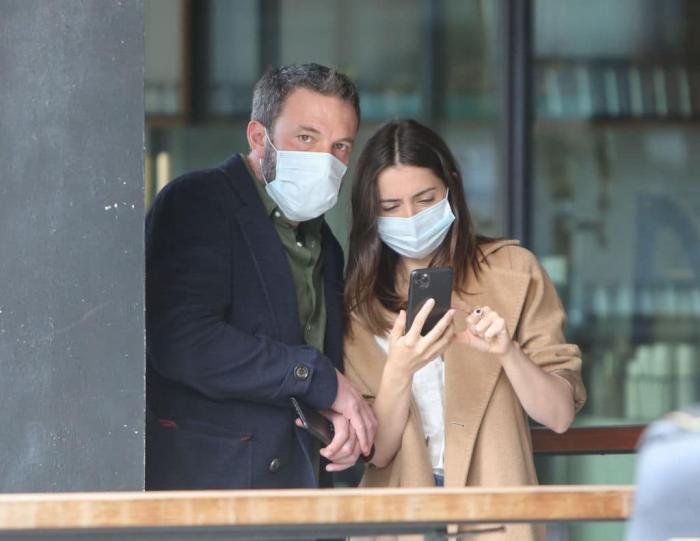 What’s Going On With Ben Affleck and Ana de Armas?

Recently, a Twitter fan account dedicated to actress Ana de Armas faced the ultimate slam from their idol when she blocked them from following her on social media. This came after @ArmasUpdates posted a series of cheeky, gently mocking tweets aimed at de Armas’s recent public outings with her boyfriend and co-star Ben Affleck. None of the messages were especially nasty or personal. Rather, the joke lay squarely on the pair in an ultimately benign way, noting how the pair weren’t adhering to current social distancing rules in the midst of a literal pandemic. Rather, the pair seemed to have thrown themselves entirely into acts of public affection for the benefit of paparazzi photographers who were conveniently in the area. The fan account was hardly the first group to point out the bizarre and silly nature of this practice. We even wrote about it on this site. Still, clearly this joke was too much for de Armas to deal with from her own fans. Currently, @ArmasUpdates is still posting about the actress in the same tone and fandom-oriented manner they’ve always used. Frankly, de Armas and Affleck have given them plenty of material to work with and they’re certainly not above milking the newfound attention from across Film Twitter.

The ecosystem of celebrity has taken more than a few hits since the COVID-19 virus became a worldwide concern and shut down vast swaths of society for an indefinite period of time. Nobody can go to the movies right now and entertainment options have drastically decreased thanks to postponed productions, canceled releases, and furloughed workers. Many celebrities have tried to find ways to plug the gaps and remain publicly relevant but that path has proven more treacherous than expected for many. Just think of how many major previously beloved figures felt the wrath of audience backlash thanks to misguided stunts — Gal Gadot and company’s sing-along of John Lennon — or with misguided attempts to seem more relatable while surrounded by obscene wealth — Ellen DeGeneres’s at-home version of her show, which soured many viewers on her long before we even heard about the way she’s allegedly treating her workers during this crisis. To put it bluntly, some celebrities need the structural guidance of the industry to hold their hand during these times and they’re simply not getting it. Not every famous person is independently skilled or charming enough to pull off a John Krasinski or Sam Neill. So, what do you do when you want to stick to the old ways during this time? Well, you get de Armas and Affleck.

Even as the public mock these pap-walk antics, they haven’t stopped. Indeed, they’ve somehow gotten even more cringe-worthy. They’re finally wearing face-masks but they’re still half-kissing for the cameras as they walk their dogs. In one utterly befuddling image, they’re standing back-to-back as they hold hands as if they’re attempting some form of interpretive dance. The PDA is strong with this pair and it’s endless with each cycle of dog walking. I tweeted that this charade reminded me of the glorious summer of Hiddleswift, but at least Swift and Hiddleston’s frenzied 4th July romance had some mutual PR commitment behind it. The thirst was real but so was the effort. Affleck and de Armas, however? None of this feels natural or charming or especially well co-ordinated. It seems shameless and deeply misguided, even if we weren’t in the middle of a pandemic.

I’m especially fascinated by Affleck’s strange PR failing here because he spent most of this year working his penitent comeback narrative with ease and charisma. Affleck has dealt with bad press in his time, especially from an overexposed relationship that became an easy target for public jokes. When he was married to Jennifer Garner, however, public perception and press control became rapidly different, mostly because Garner has a black belt in this field and seemed to be doing all the work. She’s still heavily responsible for a lot of post-divorce Affleck stuff too. Think of how many times you’ve seen images of the united exes taking their kids to church. It worked there because there was a continuing narrative at play, but with his current relationship, everything seems off.

I don’t say this to imply that their romance is fake or anything like that. The relationship doesn’t emanate the sheer stank of desperation that Hiddleswift did (or that time that Kaley Cuoco and Henry Cavill were ‘in love’ for like 12 days.) This is more a question of intent in regards to what de Armas and Affleck hope to achieve with these blatantly concerted public displays, especially at a time when the public’s tolerance for celebrity bullsh*t is at an all-time low. It would be a lot easier and more welcoming to their intended audiences to just cozy up on Instagram together and cut out the middle man.

Ana de Armas & Ben Affleck get early morning coffee and walk their dogs together while finally wearing masks when outside. (April 10, 2020) pic.twitter.com/V85b2tBJiF

As I wrote about in my piece on the pandemic pap-walk, there is something to be said about the particular brand of normalcy associated with this aspect of celebrity, and this more traditional part of PR still carries more weight for certain figures than new methods rooted on social media. Going out in public and doing normal things with his gorgeous new girlfriend who he recently made a movie with is a way to continue his current comeback narrative. For de Armas, there is more of an ingenue allure around her, although following Knives Out, she is certainly poised to breakthrough in a big way. 2020 was meant to kick off in a big way for her thanks to No Time to Die, which has now been pushed back to November. If the timing had worked out better and we weren’t, you know, all panicking over a literal pandemic, de Armas would have had the perfect Hollywood story for this year: The breakout star turned Bond girl with a megastar boyfriend and Oscar hopes on the horizon for playing one of the true pop culture idols of the 20th century, Marilyn Monroe. She’d be a truly inescapable celebrity. Right now, she’s hard to avoid too, but not in the same way and with way less of that desired impact.

Still, the pair are putting on a united front, one that sends a message to fans, the industry, and a certain ex-wife. Even if the pap-walks inspire cringe and fan backlash, the media won’t acknowledge that when it comes time to write glowing profiles and spin awards-friendly narratives for two actors putting in the work. Even when question marks remain, the allure of a power couple will forever reign supreme.

← F***, Marry, Kill--'Sex and the City' Edition | I Mean, It's a Little Weird that Alia Shawkat is Biking Over to Brad Pitt's House During a Pandemic, Right? →