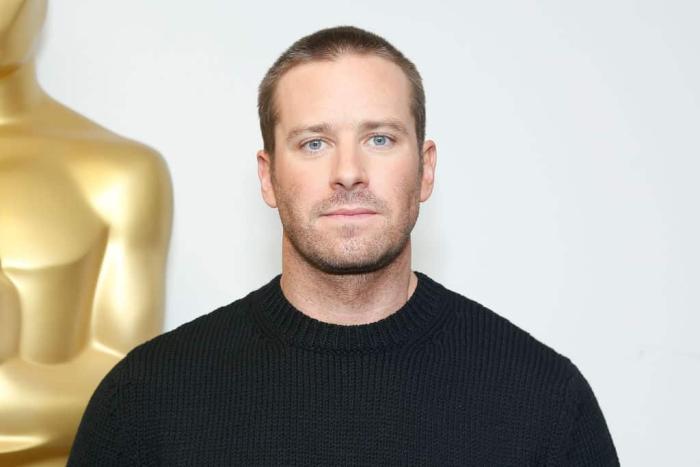 What’s Going on With Armie Hammer?

For a few months now, I’ve been trying to figure out the best way to approach writing about Armie Hammer. The actor has always been a trickier figure to pin down than one would expect upon first glance. Hammer is typically written about in terms of his handsome, traditional Hollywood leading man looks, as well as his career evolution from failed action hero to quirkier character actor. His online behavior was chaotic, whether it was posting videos of his son sucking on his toes or his attack on a journalist who wrote a critical piece about him. Following the announcement of his split from his wife Elizabeth Chambers, Hammer seemed to further embrace the unruliness, going full ‘divorced dad’ in photographs and social media posts. It was an entertaining distraction if nothing else; the knife-jawed well-bred actor who let his freak flag fly.

Things have obviously taken a turn.

This month, an exceedingly long string of Instagram DMs and text messages allegedly sent by Hammer to one of his former mistresses went viral. In them, Hammer described various sexual kinks he wanted to perform with this woman, as well as a number of deeply disturbing comments and ideas that quickly made the internet gawk with bafflement. Much has already been made about the odd cannibalism stuff, but there were also moments where these alleged messages from Hammer included him admitting to being turned on by the Luka Magnotta documentary Don’t F**k With Cats and bragging about wanting to cut off a woman’s toe and keep it as a trophy. The Instagram user sharing these messages claims that Hammer did not follow proper BDSM etiquette and frequently hurt her, and that he did so to multiple women. Some, she alleges, ended up in the emergency room because of him, and one had to receive treatment in a rehab clinic.

The alleged DMs are extremely detailed and tough to read, even in their unverified state. The Instagram account DeuxMoi, which has gained attention over the past year for its exclusives and free-for-all approach to the medium, shared other accusations made against Hammer by anonymous sources. This week, it was announced that Hammer would be stepping away from an upcoming film he was supposed to star in. While he said in a statement to The Hollywood Reporter that he wasn’t ‘responding to these bulls**t claims’, the timing of it all has proven tough to write off as mere coincidence. The Daily Mail also recently acquired video footage that shows a seemingly inebriated Hammer in his car drinking beer and licking white crystals off of a friend’s hand.

Right before this post was scheduled to go up, The Daily Mail dropped another story focused on leaked images from Hammer’s private Instagram account. This lot included him bragging about the drug tests he needed to take, reportedly as a requirement before he could see his children, and showed videos of an anonymous woman waiting on all fours for him on a bed.

One former girlfriend, app creator Courtney Vucekovich, told The New York Post that Hammer would ‘suck it or lick’ cuts on her hand and that he was emotionally abusive towards her, alleging that ‘he kind of captivates you and while being charming, he’s grooming you for these things that are darker and heavier and consuming. When I say consuming, I mean mentally, physically, emotionally, financially, just everything.’

You can understand the minefield we’re all trying to navigate here.

The news of Hammer leaving his next movie proved intriguing because, while the internet went wild with this story, the tabloids didn’t. As noted by Maria Tallarico over on Lainey Gossip, the story didn’t get much traction among the big-name gossip publications who can usually be relied on to untangle messes like this. And this is indeed a mess. Verifying allegations like these is extremely difficult. There’s still a lot of skepticism around tackling allegations of any kind but especially those made on social media. Investigating this would typically take months of fact-checking. We’ve no idea if anyone is doing such a story right now, but gossip travels fast. Clearly, it moved fast enough for Hammer and his team to worry, although he (perhaps smartly) chose to release a statement rather than go through Twitter as he typically does. This is the man, after all, who deleted his account when Anne Helen Petersen wrote a mildly critical piece on his career.

The reports on Hammer’s exit from the movie are typically headlined with some sort of allusion to a ‘social media scandal’ rather than going into the meat of what those alleged DMs said. What is being alleged here is abuse, plain and simple. These reported victims are making deeply disturbing accusations of physical, mental, emotional, and sexual pain. These are, in their words, the actions of an abusive man using kink as a defense, and that seems to be tripping up a lot of people trying to approach this story. Hammer has been candid about his sexual tastes for years now. He giddily discussed liking rough sex in a 2013 interview with Playboy, claiming that, while he was a ‘dominant lover’ who enjoyed ‘grabbing women by the neck and hair’ during sex, he curbed these tastes after he got married because, ‘it gets to a point where you say, ‘I respect you too much to do these things that I kind of want to do.” He has also liked and followed a number of kink accounts on Instagram and Twitter over the years, mostly related to shibari and knifeplay, as the handful of publications reporting on the story have pointed out, seemingly as evidence of some kind.

Kink in its various forms is still seen as taboo, and those who enjoy it frequently face hysterical accusations that they are somehow damaged or dangerous because of it. There are already voices online claiming that anyone who would have dark or full-on kinks like rape-play, knife-play, or bondage are basically serial killers in waiting. It feels like there’s already a narrative forming that we somehow ‘should have known’ about Hammer’s alleged abuses because he likes bondage, which is a wildly misguided assertion to make. It’s an easier narrative for the general public to accept than the realities of sex positivity, and it’s primed for scandal: the Patrick Bateman of Hollywood. 50 Shades of Hammer. It’s no wonder that members of the BDSM community have already condemned Hammer and called out the ways that kink has become ‘evidence’ of his alleged crimes. Hammer’s own reported words on his sexual tastes speak volumes as to his attitudes: it doesn’t make you charming or gentlemanly to say that you ‘respect’ your wife too much to ask her for rough sex. What does that say about his views on the women making these allegations, or indeed any woman with whom he has a relationship?

Writer Jessica Ciencin Hernandez, who briefly dated Hammer in September of last year, sent a tweet that read, ‘If you are still questioning whether or not those Armie Hammer DMs are real (and they are) maybe you should start questioning why we live in a culture willing to give abusers the benefit of the doubt instead of victims.’ She has since locked her account.

The Hammer story represents much regarding Hollywood’s continuing issues with systemic abuse as well as the prevailing misogyny that pollutes every aspect of our lives. It’s also something that the industry and media at large don’t necessarily seem equipped to deal with, thanks to the combination of tough topics at play. That should not, however, distract from the painfully simple truth at the heart of this case: allegations of abuse made against a rich and powerful man. Whether the industry will understand that remains to be seen. Most of the time, they seem determined to willfully ignore the obvious. We hope that a major publication will offer a thorough investigation of these allegations and do so without veering into outdated ideas about sex, kink, and the role of social media in uncovering such abuses. If we truly want to continue the change promised in a post-#MeToo entertainment industry, then the allegations against Hammer have to be taken seriously and not reduced to memes or flogging jokes.