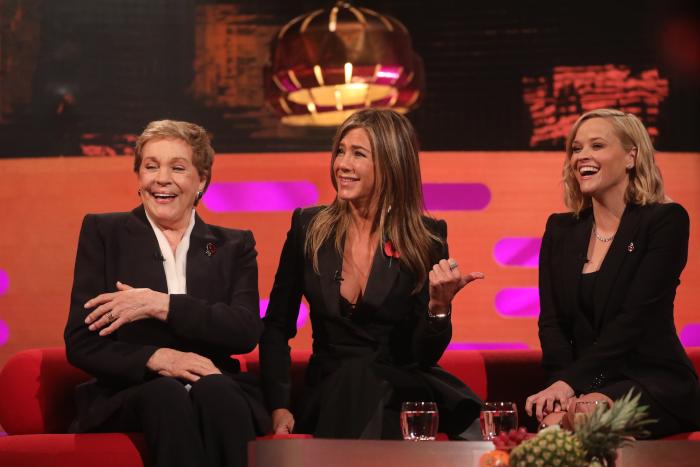 Who knew Julie Andrews was such a big Friends fan? The Graham Norton Show gave us a new side to the actress when she joined Jennifer Aniston, Reese Witherspoon — whose Apple TV+ show, The Morning Show, is being panned by critics everywhere — and Sir Ian McKellen on the BBC show. While there, they partook in a little bit of Friends trivia fun. Reese Witherspoon showcased her talent for remembering the opening lyrics to the sitcom’s theme song, Jennifer Aniston at least remembered that Rachel Green was a terrible cook, while Ian McKellen enjoyed playing game show host. Basically, after ten seasons on the NBC show, even Aniston couldn’t remember certain facts about Rachel Green, while Julie Andrews remembered the most important one.

Friends, which is living its final days on Netflix before leaving the streaming service in January 2020 for HBO Max, had their own trivia game episode back in Season 4. You remember the one: “The One with the Embryos.” Monica and Rachel don’t know what Chandler’s job is and end up losing their apartment in a bet. It is one of the best Friends episodes and I will fight you on this.

While the stakes weren’t as high this time around, it was Julie Andrews who was revealed as the truest Friends fan when she correctly answered the question about why Ross thought it was “fine to sleep with other women.” Andrews’ response: Because he said WE WERE ON A BREAK! Well, she didn’t shout it, of course. The Queen of Genovia would never yell in a public setting, but it was a cute moment.

You can watch the clip from The Graham Norton Show below.