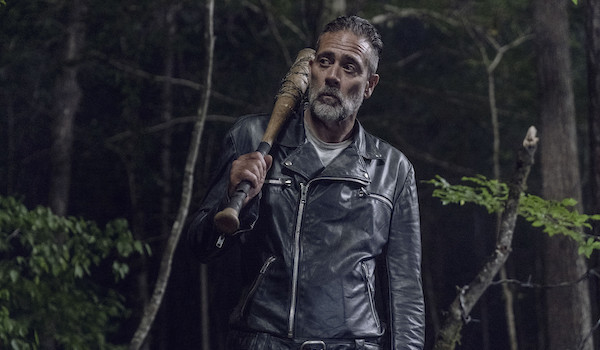 Negan Reckons With His Own Destructive Legacy on 'The Walking Dead'

Previously on The Walking Dead: A gigantic tree crashes down on the gates at The Hilltop, making it increasingly difficult to keep the Walkers from getting inside. Michonne and Ezekiel spend time bonding with each other as the latter is feeling distraught about everyone and everything he has lost. Despite her attempts to keep her head down and fit in, Lydia is bullied by some of the Alexandria residents, who still blame her for all the lives lost as a result of so many heads being severed and left on pikes. Because spray-painting “Silence The Whisperers” everywhere isn’t enough to get the point across, a few of them attack Lydia to scare her into leaving, which results in Negan stepping up to help her, only to end up accidentally killing one of them while beating their asses and with his life hanging in the balance as his punishment is decided by Aaron, Gabriel, and others. Before that decision is made, Negan disappears from his cell to parts unknown.

THE STORY SO FAR: Negan, who is still gone and who is still out and about, finds himself accompanied by Brandon, a young man from Alexandria who admires and respects him as if he’s a well-spoken White supremacist in a nice suit being interviewed on CNN, and who wants nothing more than to make a good impression and help Negan bring back the Saviors. Kelly’s degenerative hearing disorder kicks into high gear while she’s out on patrol, resulting in her being hunted by Walkers and having to go into hiding. Ezekiel reveals to Siddiq that he’s dying from thyroid cancer and nothing can be done to save his life. (Interestingly, Angel Theory — who plays Kelly — is also hard of hearing, just as Lauren Ridloff — who plays Connie — is deaf, like her character).

WHAT’S GOOD ABOUT THIS EPISODE?: Negan being forced to confront how toxic and destructive his legacy is when a young woman and her son (who Negan ends up rescuing from Walkers and promising safe passage to Alexandria) are both murdered by Brandon as his way to prove himself to Negan and earn his respect, only to end up infuriating him and getting his skull crushed with a rock, Cain and Abel-style. Daryl doing what he can to comfort Connie during their search for Kelly by telling her a story from his childhood about him and his brother, Merle. Ezekiel being unable to talk to Carol and tell her the truth about his health. Alpha reminding the Whisperers of who’s in charge when she confronts one of them about his dissatisfaction with her slow-and-steady approach to taking down Michonne, Daryl, and company. Negan (now wearing his old leather jacket and toting Lucille, thanks to Brandon locating both items) walking right into the Whisperers’ camp and making his presence known as only he can until he ends up being confronted by Beta and a few of the Whisperers.

WHAT’S NOT SO GOOD ABOUT THIS EPISODE?: You know how many fucks I give about this random and out-of-nowhere storyline regarding Magna and Yumiko having this seemingly neverending spat about the two of them not trusting each other?

IS DARYL STILL ALIVE? BECAUSE IF NOT, THEN WE’LL PROBABLY RIOT IF WE HAVE NOTHING BETTER TO DO: Yes, he is, and the possibility of him and Connie possibly hooking up on the near future now seems more and more likely after accompanying her in her search for Kelly and willingly lying on Kelly and Magna’s behalf after discovering their stash of stolen food and supplies.

ARE THE WHISPERERS IN THIS EPISODE?: Yes, they certainly are. And not only are they actually responsible for the tree crashing onto the gates, their next plan is to create a dam of Walkers to prevent Michonne, Daryl, and company from being able to access any more water and giving them more reason to abandon all hope and join Alpha instead.

TO SUM IT ALL UP: This episode was a strong showcase for Jeffrey Dean Morgan, who gets to play Negan as getting some of his swagger back while also being reminded in bloody and painful ways that he still has a hell of a lot to answer for. And seeing him walk right into the Whisperers’ home turf and leave us all wondering if he’ll be fighting with or against them is a pretty good way to kick the war against the Whisperers into high gear as we get closer to the midseason finale.

This episode of The Walking Dead has been brought to you by “Song For The Deaf” by Queens Of The Stone Age:

← 'They Live,' Starring Roddy Piper, Came to Chew Bubblegum and Kick Ass and Now It's 31 | The One Where Julie Andrews Proves Herself a True 'Friends' Fan →