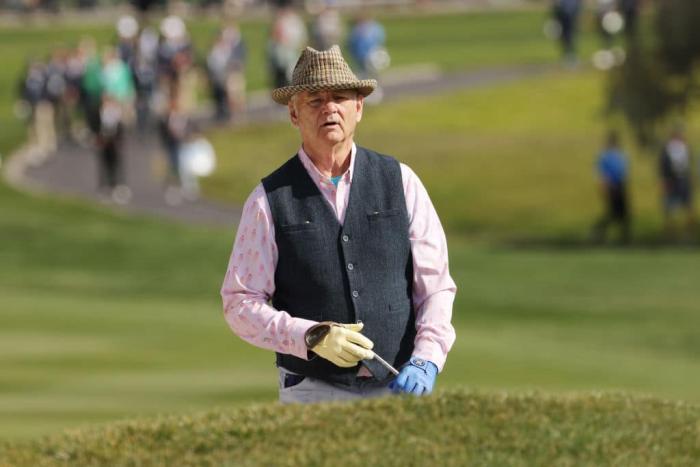 The Bill Murray Myth Has Finally Begun to Crumble

There’s a story about Bill Murray, a possibly apocryphal tale that became widely accepted not only as the truth but as the exemplification of this actor’s status as a legend. Some regular guy — he might be a college student or some random bystander — is staring down another guy. Or he’s tackled by him out of nowhere. Whatever the case, he looks and looks and is convinced that the man is Bill Murray. It can’t be, surely? He’s too famous for this kind of weirdness. Then the man approaches him. It is Bill Murray. He leans in and whispers ‘nobody will ever believe you’ then disappears into the wild.

Everyone has heard this story, this madcap burst of surrealness from the guy from Ghostbusters. It’s one of many narratives that have become the stuff of memes. There’s the time he crashed a bachelor party and gave the groom some romance advice. Or when he turned up uninvited to a house party then did the dishes. He crashes photos, plays bartender for free, and even attends ice cream events themed after himself. All of these stories have helped to sell Murray to the world as a curious sort of mascot, an agent of warm chaos who eschews celebrity traditionalism in favor of good old-fashioned harmless larks (he doesn’t even have an agent.) It’s made him far more beloved, I would argue, than even his most highly viewed performances.

That’s obviously taken on a far darker turn in recent months. In April, production was suspended on the Aziz Ansari film Being Mortal following a complaint made about Murray’s inappropriate behavior. A report from Puck News claimed that Murray paid $100,000 to settle a complaint by a woman from the film’s set. She alleges that he straddled her and kissed her through a mask. Murray claimed he was being ‘jestful.’ The woman at the center of this allegedly said she was ‘horrified.’

Following this report, a number of celebrities came forward to share their unpleasant experiences with Murray. In her new memoir, actress Geena Davis detailed how Murray harassed her when they worked together on the 1990 film Quick Change. She wrote that Murray pressured her into letting him give her a massage in a hotel suite during her meeting for her role. Another day, Murray screamed at her in front of more than 300 people on set while she waited for wardrobe. Recent footage re-emerged of a joint talk-show appearance where Murray kept pawing at Davis while she tried to laugh it off. Seth Green also talked about how, when he was a nine-year-old child actor, Murray picked him up by his ankles and dropped him in a trash can. Singer Solange Knowles liked a tweet reminding people of a time when Murray ‘put both his hands into Solange’s scalp after asking her three times if her hair was a wig or not.’

this is so disgusting on so many levels i still can't believe this actually happened on national television. also, the host and the audience??? geena davis handled it with absolute class and grace though. fuck you very much bill murray pic.twitter.com/YUvX7R7oZE

Murray has spent a long time crafting an image of himself as a near-mythical figure, a sort of impish prankster moving in and around the Hollywood ecosystem. He spent many years as one of the biggest names in American comedy, but that persona we now know as Murray-esque didn’t fully form until he entered his indie renaissance. Thanks to collaborations with the likes of Sofia Coppola and Wes Anderson, as well as acclaimed turns in films by Jim Jarmusch, he seemed to evolve into something far more ephemeral. Coppola directed a Christmas special for Murray. The New York Times even referred to him as a ‘secular saint.’ This was someone sold to the world as universally loveable, not the typical kind of superstar ego. The rules didn’t seem to apply to him.

But at the heart of this image, the universally acknowledged truth of this legendary figure, was a total arsehole. And that was what people liked. It is extremely difficult to be a loveable jerk, someone who seems to eschew conventional notions of good behavior while still endearing themselves to the masses. As Murray aged and his stature as an icon strengthened in the public and industry gaze, all of those stories of him being a dick became part of his amiability. Cruelty becomes a ‘prank’, bad behavior or unprofessionalism is ‘just how he is.’ Dan Aykroyd once referred to him as ‘the Murricane’ due to his mood swings and difficult reputation. He’s reported to have ‘feuded’ with many of his co-stars over the decades, from Harold Ramis to Anjelica Huston to many SNL alumni. His horrid treatment of Lucy Liu during the production of Charlie’s Angels has been public knowledge for about two decades, yet it didn’t seem to raise any eyebrows beyond ‘oh that darn Bill.’ Often, Liu seemed to bear the brunt of the anger, not the one who harassed her.

Indeed, his nastiness and arrogance were always portrayed as far more acceptable than the supposed ‘ego’ of women of color. Awards blogger Jordan Ruimy took umbrage with Keke Palmer, Murray’s co-star in Being Mortal, defending herself in a conversation about colorism by calling herself ‘an incomparable talent.’ Ruimy then said, “I get that Bill Murray can be kind of a tool with his sense of humor, but wouldn’t it be infuriating if this is indeed the person that got him accused and fired.” Think about that framing. Murray’s image as an iconic dick was so iron-clad for so long that some thought it acceptable to defend him against major workplace allegations by trying to take a young Black woman down a peg or two. Her confidence is to be scorned. Murray’s ‘sense of humor’ is just Bill being Bill. Imagine trying to tell this guy ‘no’ when everyone around him sees such actions as a whimsical inevitability. Imagine accepting that jolly facade when the allegations of physical violence made by his ex-wife were in the public domain for years.

Even the way Murray chose to respond to the allegations felt like part of his eagerness to maintain his image as a kook. Rather than go through the trades, even the ones more sympathetic towards accusers in the post-#MeToo era, Murray went on CNBC at the Berkshire Hathaway annual meeting in Omaha. A random location for a random sit-down. He described the allegations, the extent of which had not yet been revealed to the public, as ‘a difference of opinion’ wherein he ‘did something I thought was funny and it wasn’t taken that way.’ It wasn’t the same kind of wacky off-the-wall PR spin Murray was used to but this attempt at weak penance was still reliant on his achingly orchestrated image. He pre-emptively downplays the allegations and then positions himself as a misunderstood jokester. He may not say the phrase ‘can’t you take a joke’ but the implication is clear. It’s the same bad-faith pushback to #MeToo that was fuelled by phrases like ‘don’t take it so seriously.’

We’ve been bombarded with stories over the decades of people who were difficult, cruel, and abusive on sets but whose actions were accepted or outright condoned because they ‘got the job done.’ Many people who have been given the label ‘genius’ (or bestowed it upon themselves) use it as a shield, the worthiest justification possible for being allowed to do or say whatever the hell they want to. For Bill Murray, being vicious and actively antagonistic towards others evolved into a meme-ready quirk, a means to further his own legend while shutting down those who dissented. It clearly worked for many decades. Will it continue now that the voices against him have grown impossible to ignore? Well, he is still set to appear in an upcoming Marvel movie…

I return time and time again to that story. ‘Nobody will ever believe you.’ It certainly sounds more sinister now that we know what he’s always been capable of, and what he’s always gotten away with…


← Jerry Seinfeld's Daughter, Sascha, Is On the 'Inside Amy Schumer' Premiere | How Does 'Welcome to Wrexham' Follow the Most Exhilarating Episode of TV This Year? →