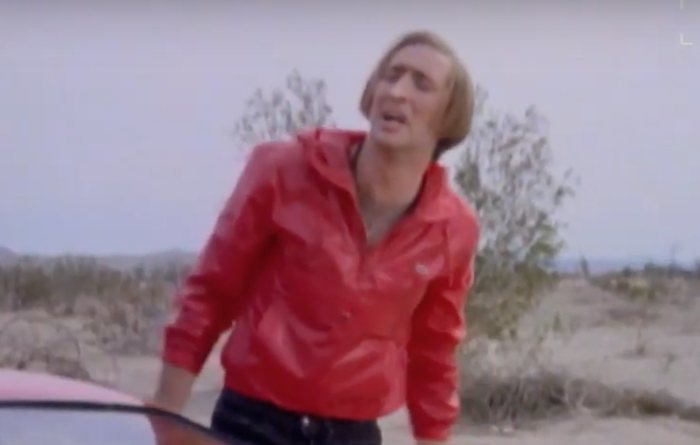 So, Nicolas Cage Has Decided To Offer You a Ride? A Pajiba Guide.

Friends, my love for Nicolas Cage is fairly well-known around these parts. As is my goal to watch every single Cage movie in order, to finally understand which one is his best. So, while I have to reach his role in the 1989 classic (yep, I’m calling this one a classic, early, without having seen it. You’ll understand why in a moment) Never On Tuesday, I’m already certain it’s career-defining for him.

How do I know this? Well, my friend Jason is on a business trip to do top secret government training, and as such, is a little bored right now. That’s why he sent me the following Tweet. I have never been so glad to have a friend be so bored because I knew Nicolas Cage was talented, I just didn’t know he was this talented.

there is a direct to video movie from the late '80s that Nicolas Cage randomly appears in. this is the entirety of his performance. pic.twitter.com/j0YcJSJ8Oy

Yes, your eyes are not deceiving you. That is Nicolas Cage, with a prosthetic nose, a Prince Valiant pageboy haircut (the best of all haircuts a man could have) offering strangers a ride in his sweet-for-the-time sports car. Why is he doing it?

So obviously this got me thinking. Life imitates art a lot, so it’s not out of the realm of possibility that someday Nic Cage might offer you, me, your best friend, and/or your dentist a ride, and you may not know what to do in this situation. Naturally, I decided to take it upon myself to help and draft up a handy-dandy guide for you because I’m feeling magnanimous today.

Tip 1: Make sure it’s Nic Cage, and not John Travolta disguised as Nic Cage because he used the face/off machine. Again.

I mean, look, this is fairly obvious and I hope it goes without saying, but I felt the need to put this in here. Clearly, you want to be given a ride by Nic Cage and not John Travolta because everyone knows John Travolta only flies planes (I think) so you probably don’t want him driving you around in a car, which is a completely different type of vehicle. How are you going to ensure this is Cage and not Travolta? Well, friends, primarily through a 2-step verification process.

Step 1) Greet “Nic” as “John” as in, say “Hey John!” if he says “Hey, bud, my name is Nic” then you know it’s Nic Cage. If he doesn’t correct you, then Travolta has gotten into the face/off machine once more. It’s beginning to be a habit with him.

Step 2) Get in the car anyway. You’re hitchhiking, so clearly you enjoy living life on the edge to begin with, so what the hey? He looks like Cage, doesn’t he? That’s good enough!

Tip 2. Make sure all of his dinosaur bones are locked in the trunk or secured in the back seat.

As you know, Cage does have dinosaur bones in his collection of oddities, which means that there is not an insignificant chance they might be in his car when he offers you a ride. Your safety is paramount, always. Make sure the bones are properly secured before you proceed to get in the car.

Nicolas Cage seems like the type of guy who may want to relive his on-screen death in the Wicker Man just for kicks. You know the one I’m talking about.

Just make sure if he’s wearing a helmet full of bees while he drives you that it’s safety first. His eyes should be on the road at all times, bee helmet or not.

Also understand that if he is in Wicker Man mode, he may want to recreate other scenes, so if that’s the case, and you see him stop the car, get something out of the trunk, and proceed to dress in a bear costume, you should probably stop the ride at that point.

Tip 4. The car may be haunted. Plan for that.

Nic Cage is a notorious ghost hunter (just like myself. Twinsies!) So, it stands to reason that he may purposefully seek out haunted cars to drive around in. In this case, an ounce of prevention is worth a pound of cure. So if you ever plan on potentially receiving a ride from Nic Cage, you should start walking around with dried sage (to smudge yourself after you get out of the car, obviously to detach any spirits who may have attached themselves to you) and holy water, now. You do not want to be caught unawares, here. Trust me.

Finally, it’s important to remember that if you’re the type of person who wants to get a ride from Nic Cage, when that dream finally comes true, have fun. You’ve worked towards this day and it’s finally here! Before you know it, the experience will be over, so do remember to try to take it all in. You’ll want the savor the memory of him driving you around in his Price Valliant hair, a prosthetic nose, dinosaur bones in the back, ghosts on your shoulder, and the bees buzzing merrily in his helmet as you two just gab and gab and gab! What a time you’ll have, together! And that’s what really matters at the end of the day, isn’t it?

Well, there you have it. My work here is done. I have passed the test. I will diminish, and go into the West and remain Kate.