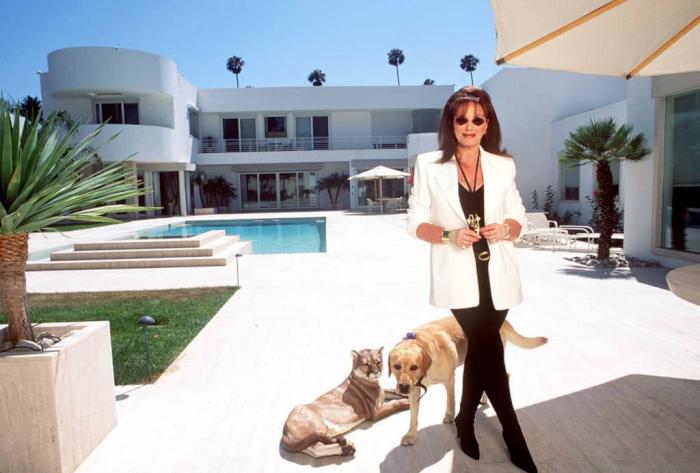 Premiering at this year’s Tribeca Festival, the documentary Lady Boss: The Jackie Collins Story proved to be an unexpected delight for many critics. Directed by Laura Fairrie and produced by the team behind the Oscar-winner Searching for Sugar Man, the film dives into the heady life and work of Collins, the prolific author of addictive pool-side sagas about rich men, their seductive wives, and the battles of sex, power, and money that engulf them. At the time of her death in 2015, the 77-year-old Collins had sold over 500 million books, and her image as a glamorous insider to the world of scandal and sleaze made her as beloved as her actress sister Joan Collins. Lady Boss offers a loving and much-earned re-evaluation of the work of a writer who was beloved by the mainstream by derided by critics.

Check out some lists on Goodreads that contain Jackie Collins novels and you’ll find a few recurring phrases. ‘Chick lit’ is one. ‘Trashy’ is another. One list puts her work alongside the likes of Flowers in the Attic and Valley of the Dollrs as ‘trashy novels [that] taught me about life.’ For a generation of readers, Collins’s work certainly comes with some curious nostalgic connotations. If you were ever a teenage girl who liked books, then the chances were you knew which ones had all the juicy stuff in them and you desperately wanted to see what all the fuss was about. Collins was one of those writers whose books came with a guarantee for the curious reader: no ambiguity, no pretensions, just all the delicious bits with zero shame.

Collins proudly wrote works for women, part of the second wave of feminism that pushed forward doorstopper novels of glamourous and often devious women as part of a gloriously appealing power fantasy. Think of writers like Judith Krantz and her tales of socialite scheming and fashion sprees, or the upper-class jaunts of Jilly Cooper, where everyone has a double-barrelled surname and polo games become the ultimate location for some frolicking (they’re even set in a district called Rutshire — GET IT?!) Lace by Shirley Conran reached new heights of filth in the ’80s with agonizingly detailed scenes of sex, masturbation, and seduction involving all manner of handsome men of variable morals. This was a subgenre known rather cheekily as the bonkbuster. Books like this still exist today, typically with glittery covers and women in sarongs on the beach, but they don’t reach the giddy or no-holds-barred levels of the likes of Collins and company.

The worlds of Collins’s novels — which are often over 500+ pages long and with multi-generational sagas that span several books — are often rooted in Hollywood and/or the crime underworld. Everyone lives in a mansion. The champagne is limitless. Brand names are dropped with excessive frequency. Too much of a good thing is wonderful in Collins’s realm. Gossip is the default language of these circles, and sex is always bed-shaking in its orgasmic force. With Collins, there was the glimmer of reality in her stories, not so much within the novels themselves as Collins’s image as an industry insider who attended all the parties in Tinseltown just to take notes for her dear readers. The notion of interiority is not exactly prized in the stories of characters like Lucky Santangelo, crime heiress and Lady Boss (a phrase Collins made her own long before its tedious appropriation by every capitalist who desired a vaguely feminist sheen to their ruthlessness.) They told you what they wanted, and they went out and got it.

It’s not hard to see why such stories enthralled millions of readers, particularly in the ’70s and ’80s, a time of renewed freedom for women and the growing fetish of greed and wealth that defined the Reagan years (Collins was English but her most famous novels are decidedly American in their extravagance.) Sex may have become a less taboo subject, but it was hardly one welcomed with open arms, especially in terms of feminine desire. Indeed, when Collins published her first novel, The World is Full of Married Men, in 1968, romance novelist Barbara Cartland slammed her with creating ‘nasty, filthy and disgusting’ work that she claimed would be responsible for ‘creating every pervert in Britain.’ That insult, of course, only helped to increase Collins’s sales.

It must be said that a lot of this genre has not aged well. Krantz’s work has some very cringe-inducing slurs that may have been more commonly accepted at the time but jolt the modern reader out of the story. So many of these narratives are about former fat girls getting thin and ‘hot’ for ‘revenge.’ If you have a low tolerance for women calling one another ‘bitches’ and ‘whores’ then maybe skip this genre. It’s certainly part of a highly specific cultural time capsule that modern literature given the divisive label of ‘women’s fiction’ likes to stay away from. But it’s not the sex or the scandal that has allowed Collins’s work to endure. Like many a good bonkbuster, the real power lies in how Collins took these stories of women, however heightened and ‘unlikeable’ they may have been and took them 100% seriously. Her women lived rich and complex lives, independent of male demands or societal restrictions, and their pleasure was never secondary. There’s also a keen understanding of how smothering it is for women to have to play by the limiting rules placed upon them by patriarchy. Collins’s heroines got to wear more diamonds than the rest of us but they remained familiar in all the right ways.

Younger generations of readers may find the notion of a Jackie Collins novel to be too of its time, a gauche throwback that has no place in 2021. Still, I would urge the curious among you to give her a go, especially as we head into beach read season. (I would suggest starting either with Chances, the first book in the Lucky Santangelo series, or Hollywood Wives, which is practically the Jackie Collins Rosetta Stone.) At the very least, it’s heartening that Lady Boss will offer an oft-maligned writer her moment in the sun to be acknowledged for her undeniable contributions to women’s fiction. Throw your drink in someone’s face in celebration of Jackie Collins.