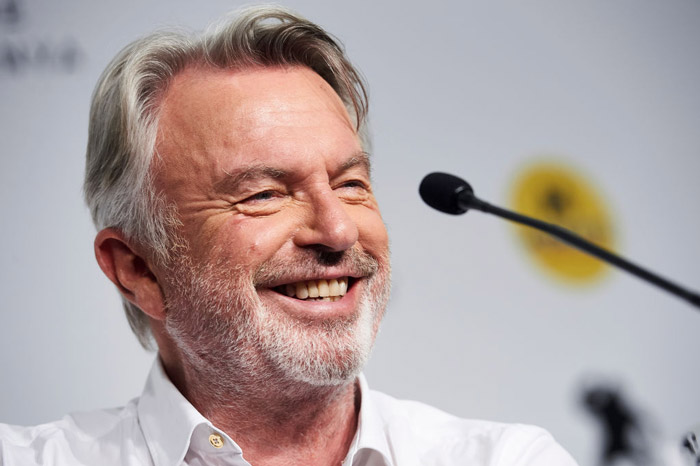 No, seriously. He did.

Sam Neill is a master of social media. He knows how to hook an audience with something shocking paired with something sweet, odd, and entertaining. He knows people love his animal friends. And he knows how to low-key promote his vineyard, Two Paddocks, named for his iconic turn in Jurassic Park. He does all of the above with his latest Twitter post, where Neill introduces the world to his fat c*ck, Michael Fassbender.

No wonder that Pig is so damned fat . And #MichaelFassbender the cock. That is one overweight chicken . Still , at least they share. pic.twitter.com/9LYcHQmBB0

Is this name a cheeky reference to Fassbender’s revealing Shame performance? Probably. However, Neill notes its not so much bawdy jokes that earn a celebrity an animal homage as friendship.

Correction . He is a friend . That is how you get an animal called after you on my farm; and yes we worked together and it was fine. https://t.co/G6zWG2sA1R

The New Zealand actor quite co-starred with Fassbender in François Ozon’s 2007 period-drama, Angel.

A quick song for my animals. ( I’ve done better ) . Actually it was MICK MOLLOY the ram , that imposter and dud , that ate the Shakespeare . We will have words on my return . ⁦@mickmolloy⁩ ⁦@Jane_L_Kennedy⁩ ⁦@kennedymolloy⁩ pic.twitter.com/eKHvB8YS2s

Had to leave The Pig and his friend The Ram ( Jeff Goldblum ) behind on our morning walk . The pig found a few hundred pears lying around. And they weren’t going back into their paddock for anyone . Must be the size of Texas by now. . I had to go to work… pic.twitter.com/CYJrX9krPH

Helena Bonham Carter, the cow, trying to kiss me this morning. I don't blame her . I'd shaved. pic.twitter.com/fKSMGM0DyN

He even talked about his animal friends on The Graham Norton Show. Specifically, he talked about the reasoning behind these monikers, explaining, “In all fairness, you can’t eat Meryl Streep.”

← Ghislaine Maxwell, Friend of Jeffrey Epstein and Implicated in His Sex Crimes, Finally Arrested | Ray Fisher Is Mad As Hell At Joss Whedon And He's Not Going To Take It Anymore →