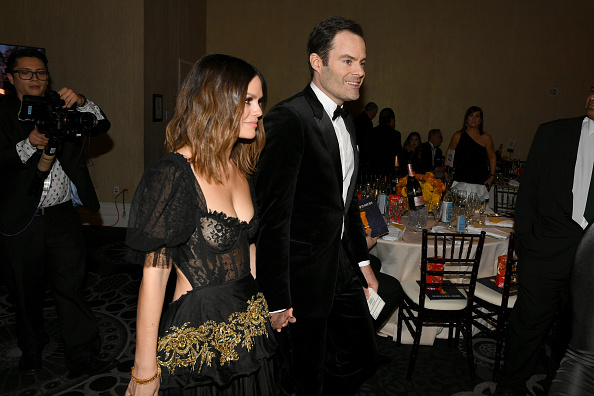 The notoriously private Bill Hader keeps his love life on the down-low, although he doesn’t mind occasionally talking about the time his daughter viciously threw him under the bus in front of Chris Pratt. I respect his privacy, but I’m also messy and I love gossip, so if Hader’s ex-girlfriend Rachel Bilson is going to spill some tea, I’m going to gulp it down.

To wit: Bilson has mentioned her break-up with Hader on her Broad Ideas podcast a couple of times in the last week, first with guest Aubrey Plaza, where Bilson revealed she used to date Hader. “Are you serious?” Plaza asked. “I don’t know shit. I don’t know anything.”

“We dated,” Bilson replied. “I went to the f**king Golden Globes [with Hader].”

Broad Ideas, which Bilson hosts with her best friend Olivia Allen, is about sex, mental health, and their belief (or lack of) in ghosts, so you’d expect Bilson to be occasionally forthcoming about her personal life. Indeed, in another episode last week with guest Mandy Moore, she referred again to Hader, though she didn’t mention him by name. She told Moore that after her break-up with Hader, she “could not leave [her] house” due to quarantine and “had nothing else to do but sit in it, deal with it and feel it.”

“It hurt like a motherf-ker,” Bilson said, telling Moore that the experience “was probably the hardest thing I’ve ever done. Harder than childbirth. … If you actually face it, you can come out of it and be like, ‘OK, I did that, and I’m ready for the next thing.’”

The next thing, it seems, is the podcast she’s currently hosting, as well as another podcast she hosts with Melinda Clarke about The O.C. called, appropriately, Welcome to the OC, Bitches!. She is currently dating artist Zac LeRoc.

Hader’s Barry, meanwhile, just ended its third season. He has been reportedly dating Anna Kendrick for the last year, which is weird AF.


← You Know Nothing, HBO | Samantha Bee Wants To Know Why It's More Dangerous To Give Birth While Black →