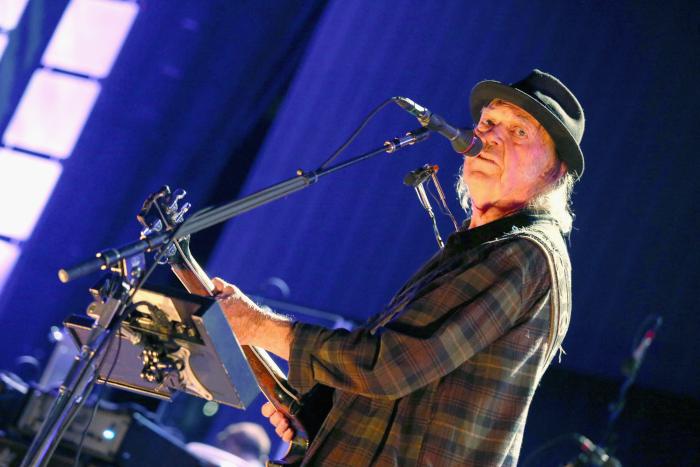 You know which iconic artist from the ’60s and ’70s remains awesome and hasn’t turned into a reactionary asshole? Neil Young, who hasn’t wavered one bit from the ideals he embodied during the first stage of his career, still releasing protest albums at a rate of one a year over the last century, still keeping an active schedule of fighting on the right side of history in a more targeted way than, say, Bono. More recently, evil agribusiness multinational Monsanto honored him by having their private intelligence agency monitor his campaign against the company.

On Monday, Neil Young decided to step up his King Shit and take a stance against the biggest voice in anti-vaccine misinformation: That Hummer 2 in human shape called Joe Rogan. Instead of going for a regular Twitter feud that would only bring the latter more attention, Neil Young decided to go for an actual, good-old-fashioned boycott, the kind that will first hurt his pockets.

In a letter published on his website, he denounced Spotify for hosting and funding The Joe Rogan Experience, and threatened to pull his catalogue unless they removed him. Of course, since Joe Rogan hosts the most popular podcast in the world, bigger than everything on cable news, there was little chance Spotify would do anything about it, other than standard issue PR-defenses. After all, artists are always talking big game without actually comitting to the part.

Neil Young is actually putting his money where his mouth is, and will actually have his catalog taken off Spotify. Considering the reach and widespread use of Spotify, this will actually impact his revenues, up to 60% of his streaming income according to the man himself.

But wait, you might ask, isn’t Spotify known for paying jacksh*t to artists per stream, in a very egalitarian way? Something The Daily Show had a crack about too:

Neil Young is gonna regret this when his monthly Spotify checks for $1.37 stop rolling in https://t.co/nAyAJ8ayqv

Well, yes and no. There is a website called ChartMasters that is dedicated to researching how many copies the most famous artists in the world have made. I apologize already for showing you the next Nerd black hole where you’ll waste hours at a time. Recently, they did a study on Neil Young, alongside Buffalo Springfield and CSN+Y. Sure, his entire career has reported Young a pretty penny, but he is far from a non-entity on Spotify. The crew at ChartMasters developed software that keeps track of daily streams and updates the data regularly, converted to album equivalent sales. As of this week, Young was averaging the equivalent of around 800 copies a day on streaming, just for his solo output. Even at Spotify rates, that’s hundreds of thousands of copies a year. That’s money, money that accrues over time. Young has less to lose, but we’ve seen time and time again how it is the established artists who are the most reticent to take a strong political stance, one that might hurt their income, even a little bit. A good message is always a good message.

Young encouraged other artists to do the same, and he would be right. His figures were robust enough for an artist of his generation, but imagine if, say, Taylor Swift chose to threaten the same move. Because unlike with other internet platforms, Spotify has competitors: Tidal, Apple, and even Amazon. We know by now that when Taylor uses her influence, the system listens. It would only take her and someone like The Weeknd or Olivia Rodrigo to threaten this and Spotify would put the editorial kibosh on Joe Rogan. They don’t need to deplatform him, just tell him to stick to reviewing UFC fights and marijuana brands.

This whole thing reminded me how I spent a good chunk of 2006 listening to a compilation of Neil Young’s classics and deep cuts, an MP3 folder that I listened to on my portable CD player. As a tribute to the music that got me through my terrible 17th year of life, I’ll also take my wallet elsewhere. If by mid-February Spotify hasn’t done anything about Rogan’s shit, I’ll be canceling Spotify and joining wherever else they have Young’s music. It would be another heartless corporation win, but a message is a message.

Alberto Cox is now a little scared he has just brought on himself a host of rabid Roganites. He is currently frantically paging Chilean Swifties as hired muscle.