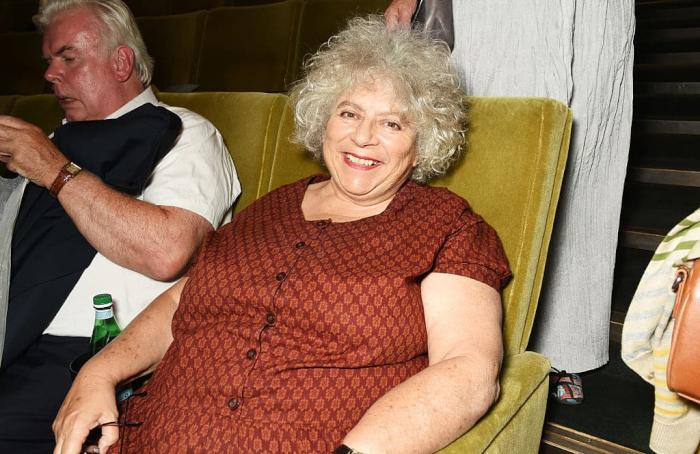 Whenever a celebrity’s name starts trending on Twitter, we typically assume one of a few things: They’ve passed on; they’ve said or done something racist; or, in the current age, they’ve contracted the coronavirus. It’s a rare delight to click on a familiar trending name and see them saying or doing something nice, so let’s just take a moment to appreciate the delights of Miriam Margolyes.

You definitely know who national treasure Miriam Margolyes is. She’s an award-winning actress of the stage and screen who’s worked with the likes of Martin Scorsese, Barbra Streisand, Kenneth Branagh, and Baz Luhrmann. She does comedy and drama and mystery and documentaries. If you’re a Miss Fisher fan then you’ll recognize her as Phyrne’s aunt Prudence. If you watch a lot of The Graham Norton Show then you’ll be familiar with her MANY amazing appearances where she usually has the other guests in fits of laughter with her stories.

And, of course, like basically every other major British actor, she was in the Harry Potter movies. That’s important for today’s story and why she trended on Twitter. In a recent interview with The Times, Margolyes was asked about J.K. Rowling’s recent turn towards full-on screaming-on-the-internet-every-f**king-day transphobia. Like the classy and delightful woman that she is, she said this:

‘She has a rather conservative view of transgender people. I don’t think I do.

I can’t make it out. It’s a matter of personal happiness for people and I think that’s what you should concentrate on. If you seriously want to become a woman you should be allowed to. You can’t be fascist about it. I think it’s confusing.’

Margolyes is the latest in a long line of Potter actors who have spoken out against Rowling’s f**king awful bigotry. Daniel Radcliffe responded with an op-ed for The Trevor Project wherein he declared, ‘Transgender women are women. Any statement to the contrary erases the identity and dignity of transgender people and goes against all advice given by professional health care associations who have far more expertise on this subject matter than either Jo [Rowling] or I..’ Emma Watson, who had previously shown her support for trans rights prior to Rowling’s f**kery, took to Twitter to support her trans followers and made donations to two major trans-inclusive charities, Mermaids and Mama Cash. Even Eddie Redmayne, Pajiba’s unofficial nemesis and a guy who literally made bank playing a trans woman for Oscar clout, had to call time on Joanne’s crap.

This all comes after Rowling signed an open letter from Harper’s denouncing the evils of cancel culture coming for her ill-informed hatred, as well as a slew of badly written think-pieces from the usual crowd of rent-a-gobs declaring how ‘ungrateful’ Potter fans and the films’ former child stars are for daring to go against the holy word of Rowling. Apparently their free speech doesn’t count. I guess you need to make at least £100 million before it does.