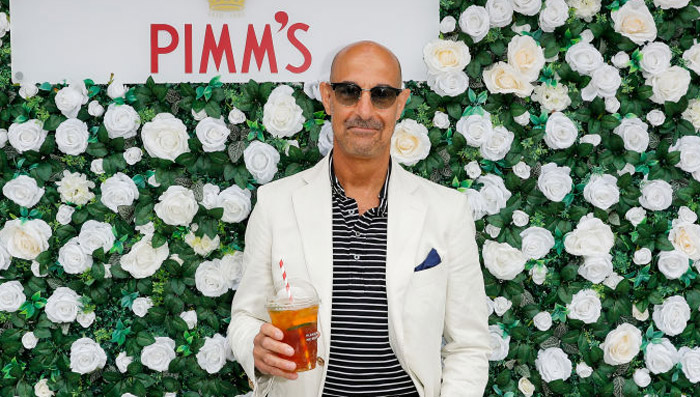 Stanley Tucci has been a smoke show for decades. He’s been flaunting his guns in tank tops, flashing those forearms on cookbook covers, taunting us with that smile, and tantalizing us with his passion for great food. Lately, he’s earned a slew of new fans thanks to his thirst trap cocktail tutorials. So, naturally, this debonair New Yorker went on The Graham Norton Show to talk about how his Instagram videos have been driving Twitter users to thirst tweet.

Among tweets about our collective lust for the charismatic character actor, Norton shared one from Chris Evans, who dropped an envy-inducing behind-the-scenes fun fact from Captain America: The First Avenger.

On some(most) days after we finished filming on the first Captain America movie, Stanley would make us martinis in his trailer.

He’s an absolute gem. However cool, fun, witty, and charming you think he is, double it and you’re halfway there. https://t.co/mEJzuV8oAH

Tucci confirmed this enticing anecdote, saying, “I like to have a portable cocktail set that I bring to set. And at the end of the day, if it’s an appropriate time, I make martinis for whoever would like to join me.”

Imagine the cast of a Tucci movie gathering around at the end of the day to toast each other and enjoying a delicious martini. I want that image to surface. For now, let’s settle for this.

Bonus Tucci fun times: The Graham Norton Show posted a vintage clip with the Tucc that’s an absolute gem. It begins with Norton and Tucci discussing the latter’s role in The Devil Wears Prada, a part for which the former auditioned! Then, Harry Potter star Miriam Margolyes jumps in and things get a bit wild.

Okay, let’s follow this rabbit hole because Margolyes is hilarious and we could use the pick-me-up.

Got a thirst trap or a goofy vid to share? Toss it in comments for all to enjoy.

← Why Is Bryan Adams Trending On Twitter? Racism. | Sing-Along-A-Lockdown: Why Not Enjoy Some Quarantunes? →