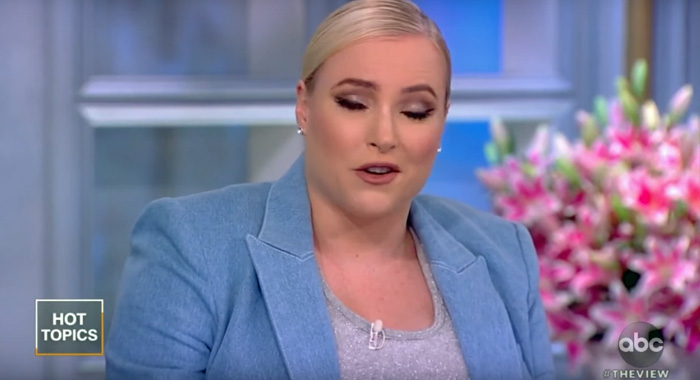 Meghan McCain might look like a confident La-Z-Boy when her mouth becomes a Karen-galactic portal for Fox News talking points to infiltrate The View, but if there’s one thing she knows jacksh*t about, it’s winning presidential elections. Not only did MY FATHER© lose to Barack Obama, but his campaign fired Meghan for constantly pissing people off. (I’m as shocked as you are.) If there’s one job Meghan was molded out of bland mashed potatoes for, it’s talking about John McCain until the entire planet bleeds from the ears, and she couldn’t even do that right. Yet, day after day, she’s allowed to hurl words at a daytime audience as if she knows what the hell she’s talking about.

Case in point, here’s Meghan telling the Democratic presidential candidate what to do while deliberately fear-mongering that they’re going to give free healthcare to any old migrant who waltzes into the country, as if that would be a bad thing. “Convince me, an idiot who refuses to be convinced,” she basically argues.

The conservative co-host on “The View” said she was anticipating “crazy crap” from fringe candidate Marianne Williamson in next week’s Democratic debate, but she warned the higher-profile candidates to dial back the “radical stuff.”

“If you’re going to raise your hand and say that all illegal immigrants should have health care when they come into this country,” McCain said, recalling a moment from the first debate that oversimplified the candidates’ actual position on that issue.

“Right now it’s who can be the most far left on this stage,” McCain added, “which is great for a primary, it’s great when you’re trying to win over Democrats, but when you get to a general, it’s also who’s going to be able to hedge and win over the Trump voters after they voted for President Obama.”

You’ll probably be surprised to learn that Meghan is also over-emphasizing the mercurial Obama-Trump voter demographic, but she’s not alone in chasing that myth. We saw it in every New York Times article about white assholes in podunk diners, and in Bernie Sanders’ refusal to acknowledge that Trump voters are racist and sexist as hell. To admit that would require admitting that he would’ve fared no better than Hillary, if not considerably worse. And it’s definitely the latter because I live in Podunk, PA, where Trump is routinely stopping by to hold rallies, and these are the kinds of memes these people share on Facebook with the laughing so hard I’m crying emoji. 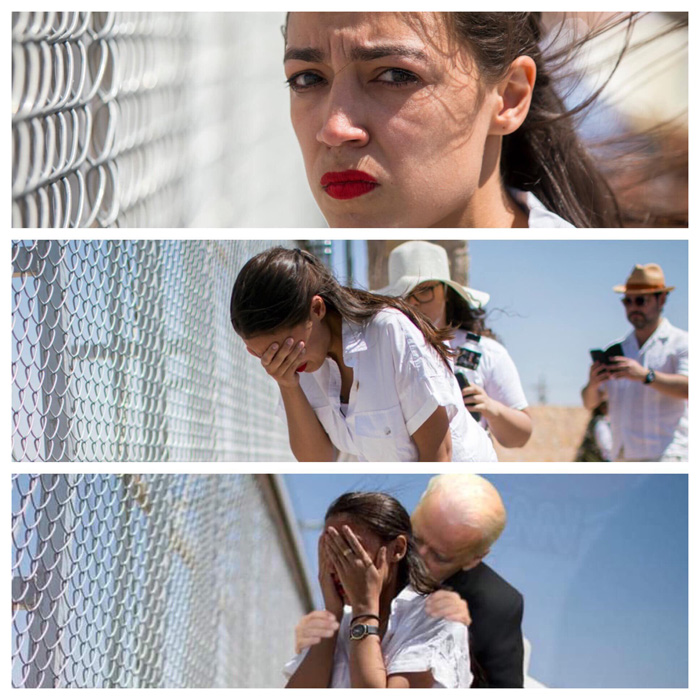 Just so we’re all clear, this is a meme about how funny it would be if Joe Biden started sexually harassing AOC while she’s crying outside of a child concentration camp. That’s the kind of shit that conservatives in swing states think is hilarious because they’re f*cking dead inside. As long as Trump is stacking the Supreme Court to outlaw abortion, force gays back into the shadows, and give everyone a huge tax cut that they’ll see in their paychecks because Mexicans aren’t stealing their jobs anymore, the ends justify the means. You are not reaching these people ever, and it really must’ve been awesome for Meghan to hear Sunny Hostin say exactly that.

“I don’t think it’s about winning over the Trump voters, actually,” Hostin said. “I actually think if you look at the estimates by the U.S. Elections Project, 43 percent of eligible voters didn’t even bother filling out a ballot in 2016. That means 100 million people who have the legal right to vote just decided it wasn’t worth it. Those 100 million people need to show up, so we need a candidate that are going to energize those people to walk out of their doors and walk to the ballot box and vote.”

“Who cares about the Trump voters?” she added. “If you support this president after his racism, after putting kids in cages, and everything he’s done — you’re not going to change, you’re foregone. I don’t care about you, I care about 100 million people.”

What’s even more ridiculous about Meghan lecturing Democrats that good, smart, intellectual conservatives such as herself need to be courted is that just last week Meghan literally proved Sunny’s point by blurting out that she supports the GOP backing every sh*tty thing that Trump does.

McCain, who has said she would not even vote for family friend Joe Biden because he’s a Democrat, then offered an excuse for Republican leadership standing by Trump.

“It’s obviously about power,” she said. “I’m sorry, this is not a complicated question. It’s about political power — as it should be.”

But wait, that’s more! Later this morning, mere minutes after pretending she’s an open-minded political analyst with sage advice on how Democrats can win the general election, Meghan lost her shit on Ana Navarro and made it very clear where her white bread is buttered.

After Navarro pointed out that Mueller explained that Trump could be indicted after the presidency and thus could be “held accountable for criminal acts,” McCain attempted to push back as the “Republican at the table.”

“I’m a registered Republican too,” Navarro, a former GOP strategist, countered. “I’ve been a Republicans since I was 18 years old.”

What the f*ck was that? Meghan McCain practically pulled a knife out of her purse and threatened to cut Ana Navarro for daring to say that there are two conservatives on the show. That’s who Democrats are supposed to take political advice from? A spoiled brat who got fired from her father’s losing campaign and whose identity is so intertwined with the Republican Party that she’ll go full Real Housewife if you even hint that you’ve been a dead-eyed conservative longer than her.

It’s a miracle she didn’t flip the table over then call up Tamra for talking about Brooks again.

← Which Celebrities Do You Not Care About Individually But Love as a Couple? | Stream It Or Nah? Netflix's 'Great Hack': What Are We Really Angry About Here? →