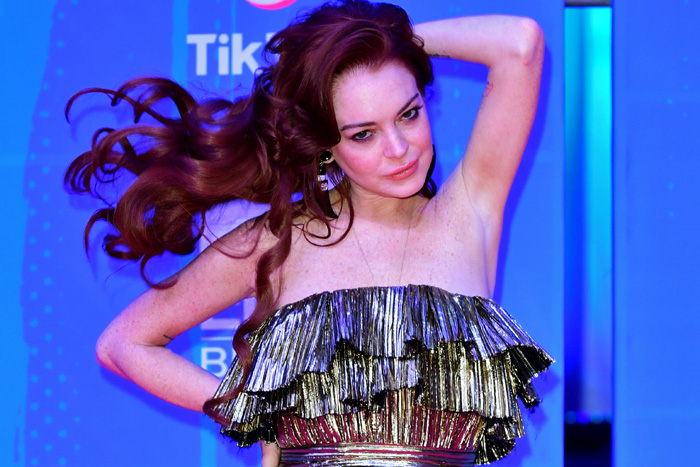 As someone who’s been following Lindsay Lohan’s exploits for over 12 years now — what am I even doing with my life? — I honestly can’t help but marvel at her ability to not only be a run-of-the-mill celebrity trainwreck but also find the time to be a non-stop international crisis. That takes skill. While it’s easy to write her off as a washed-up actress, Lindsay’s out here doing it for herself. I’m talking spreading Turkish propaganda, trying to kidnap Syrian refugees, and being best buds with Vladimir Putin. While most starlets are content with simply yachting, Lindsay’s out here literally stoking foreign policy. (I think I forgot an “r” back there.)

Case in point: Her latest paramour is reportedly Saudi crown prince Mohammad bin Salman. The same crown prince who the United States intelligence community believes is responsible for the murder of Washington Post reporter Jamal Khashoggi. Yup, that guy. According to Page Six, Lindsay has been flying around on MBS’ private jet while he “showers her with presents.” Turns out Lilo is basically the Freckled Beyonce of the Middle East, which is why her father, famed vagina-kicker Michael Lohan, is not at all concerned that his daughter is flying around with a dude who has people chopped to pieces while they’re still alive. Dating, right?

He told us at Denise Rich’s Angel Ball on Monday, “They are just friends, Lindsay has a lot of powerful friends in the Middle East, because she is huge out there. Lindsay met MBS because of the work she has been doing in the Middle East. She is working to help people in the region, particularly refugees.”

He added, “Nobody writes about the good work Lindsay does in Syria, they just want to hear the bad stuff. She has a platonic and respectful relationship with MBS, nothing more.”

When asked if he is concerned that Lindsay is spending time with someone accused of imprisoning members of his own family and ordering the murder of prominent Washington Post journalist Jamal Khashoggi, Michael added, “None of that has proven to be true. Lindsay says he’s a good person.”

“None of that has proven to be true.” Wow, Jesus Christ. I get being leery of the government, but I’m pretty sure that should stop way short of, “You know what? I’m going to take Lindsay Lohan’s word on this.” Then again, Mike Lohan’s go-to argument is a swift foot to the ham-wallet, so we’re not exactly dealing with a world scholar here.

For the record, Lindsay’s rep claims she only met the crown prince once over a year ago, but it sure sounds like their relationship is closer than that if she’s already telling her dad that MBS isn’t a murderer. I’m not sure what the timeline is for seducing foreign dignitaries, but I’m pretty sure you don’t jump right to denying the torture of his enemies on the first date. There’s a dance to it.

← Review: 'Into The Dark: Pilgrim' Explores Thanksgiving Holiday Horror | 'Castle Rock' S2 Ep4 Recap: What Is The Meaning Of 'The Ravening Angel' And 'Caveat Emptor'? →