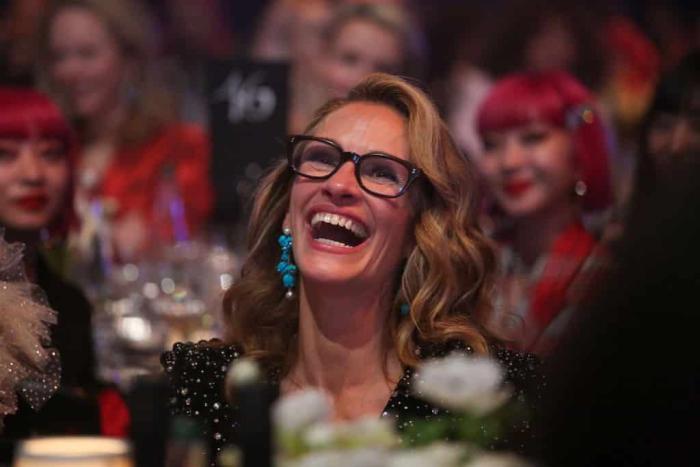 Julia Roberts, one-time America’s sweetheart and undisputed megastar of the ’90s, has many iconic fashion moments to her name. The vintage Valentino dress she wore when she won her Oscar for Erin Brockovich is a truly iconic garment, for one, so beloved that it has its own Wikipedia page. We could be here all day discussing the narrative of her outfits in Pretty Woman. I’m personally a sucker for the masculine suit she wore when she won her first Golden Globe, formal grey set against that incredible head of curly hair. When you’re as wildly famous and instantly recognizable as Roberts, fashion is part of the package. Yet when I think of Julia Roberts and clothes, the first thing that comes to mind is probably not a moment she’d be all that keen to memorialize. And it wasn’t even a nice t-shirt.

My fav Julia Roberts story is when she stole her husband from his ex wife, named Vera, then wore this shirt. Queen. pic.twitter.com/8GffUm4Eqb

In 2000, Roberts was ridiculously famous. A year away from winning that Oscar, she had become the first actress to be paid $20 million for one film, that movie being Erin Brockovich. Her face was everywhere and so were details about her love life. At the time, she was seeing Benjamin Bratt but she’d already very publicly married Lyle Lovett and dated the likes of Matthew Perry, Liam Neeson, and Dylan McDermott. Perhaps most infamously, she had ditched her fiancé Kiefer Sutherland three days before their scheduled wedding and ended up getting together with his best friend Jason Patric. My friend and former podcast co-host Sarah Marrs dug into this era of Roberts’s life in this wonderful piece forDecider so I won’t go into it too much. Suffice to say, Roberts had the kind of personal drama that the tabloids relish, and the actress herself was used to navigating the trickiest and most painful details of her life while the world watched.

That year, she went to work on The Mexican, co-starring Brad Pitt and directed by Gore Verbinski. During production, she met Danny Moder, a camera operator and cinematographer. In a later interview with Oprah, Roberts said she and Moder hit it off on-set but remained ‘just friends’ because she was still with Bratt and Moder was married to his then-wife of three years, Vera Steimberg. She also admitted that she fell in love with him while he was still married but ‘he sorted his whole thing out, separate and apart from me. And I sorted my life out, separate and apart from him. I think that’s the only reason we were able to ultimately fall in love with each other and be together.’ She was lavish in her public adoration of Moder, telling ABC News, ‘I was born to love and to be the wife of this man.’

Roberts insists that she wasn’t the homewrecker here, and she spent a lot of time in interviews saying so, reminding the public that they don’t know everything. It’s fair enough from her perspective. It’s always been a gross narrative to spin this idea of the helpless little man who just had to be ensnared by the movie star and couldn’t help but fall into infidelity. The press certainly enjoyed this angle, however, and brought up Moder’s estrangement from his wife at every opportunity. In a September 2001 article from Hello, Roberts is described as ‘romantically challenged’ and there’s a source claiming that Moder is worried that the drama over ‘his affair with Julia’ may have contributed to the stress that led to the passing of a family member. Yikes. Generally speaking, a lot of the Roberts relationship reporting gave this air of ‘Hurricane Julia’, for better or worse. Mostly worse. Of course, ’90s tabloids did love themselves a bit of woman-shaming mixed with fetishizing of fame. That trend never really went away, did it? It’s just louder in a different way thanks to social media.

The pair were now public, but Moder was still married, and sources said that Steimberg did not want to file for divorce so quickly. Keen to become the new Mrs. Moder, Roberts decided to take matters into her own hands via some crafting. In early 2002, Roberts was photographed in a very early 2000s ensemble: boyfriend denim jeans, oversized belt, black coat, and a white t-shirt. Emblazoned across it in a clearly handwritten style was the phrase ‘A Low Vera.’ A bad pun? Yes. A clear message? Eh, only if you knew what was being discussed, but if you did know, hoo boy was it a mess!

The story behind this petty display of fashion is actually quite fascinating. It was Spring 2002 when Julia Roberts stepped out in this T-shirt, a not-so-subtle reference to Vera Steimberg, who was in the process of divorcing Roberts’s then-boyfriend, now husband Danny Moder. pic.twitter.com/HEHTMDobaH

It’s not as smart a piece of wordplay as I’m sure Roberts thought it was at the time but feathers were still ruffled. Reports emerged that Steimberg’s family, who were still close with the Moders, thought it was tacky. A lot was made of the fact that Danny Moder’s sister called Roberts a ‘diva’ who was ‘possessive’ over her brother in a journal written while she was in rehab. Not exactly ethical but it gives you an idea of the kind of invasiveness that was typical of the era. Roberts wanted everyone to know she was wearing the t-shirt too and all but posed for the paparazzi. When asked about it by Oprah, she said, ‘You know what that was about? It was private’ and that ‘I stand by my T-shirt.’ A bit hypocritical to talk about privacy here but clearly it worked. Steimberg officially divorced from Moder in June 2002, and not a month later he and Roberts tied the knot at a midnight ceremony at her ranch in Taos, New Mexico. They’re still married and have three children together. Moder regularly works as a cinematographer on Roberts’s films. Steimberg told The Sun, ‘I’ll never be able to forgive Julia — she’s a husband stealer […] [Roberts] will be looking for a new husband within a year.’

I’ve never been a massive Roberts fan, but I’ve always been fascinated by this moment in celebrity madness because it’s the kind of transparent pettiness we simply don’t expect from a bona fide A-Lister. This is Bravo housewife stuff, or YouTube beauty vlogger wars territory. Maybe Kanye West would do this kind of thing right now as he continues to go to war with everyone, but he would probably also merchandise it to his obsessive fans to turn it into a much bigger media battle. This was personal. It’s a step away from a soap opera-style slap fight. And it was all being done by America’s sweetheart!

Roberts has seen plenty of holes punctured in that wide-smiled image of relatable perfection, often by her own hand. The press loved to portray her as a serial dater with a string of heartbreaks to her name. Roberts herself pushed against the brand with films like My Best Friend’s Wedding, where she subverted audience expectations to play a messy manipulator. This isn’t to say that Roberts should have adhered to the obviously impossible standards of being that rom-com queen. Who the hell could ever pull that off, especially as the goalposts are constantly moving? It’s more that the media spent so long reinforcing a wonky image for Roberts that it had no idea how to act when she rejected it or was outright mean. And make no mistake, that t-shirt was mean. It’s never a good look to be out there with the cameras telling your boyfriend’s wife she’s the bad guy for not divorcing him quick enough for his current paramour’s liking.

For my money, Roberts is at her most interesting as an actress when she embraces that coldness. I still think her greatest performance is in Closer and she’s one of the few people who emerged from the trainwreck of that dismal adaptation of August: Osage County with any dignity. Nowadays, Roberts works sporadically but has far less interest in being the kind of on- and off-screen presence she was in her heyday. I don’t blame her. It’s not as though Hollywood is kind to women over 35, let alone 50. Moreover, as a woman who’s been married to the same guy for almost 20 years (another industry rarity), Roberts has escaped the barrage of drama that defined much of her career. Of course, to get there, she had to cause some drama of her own. I wonder if she still has the t-shirt.