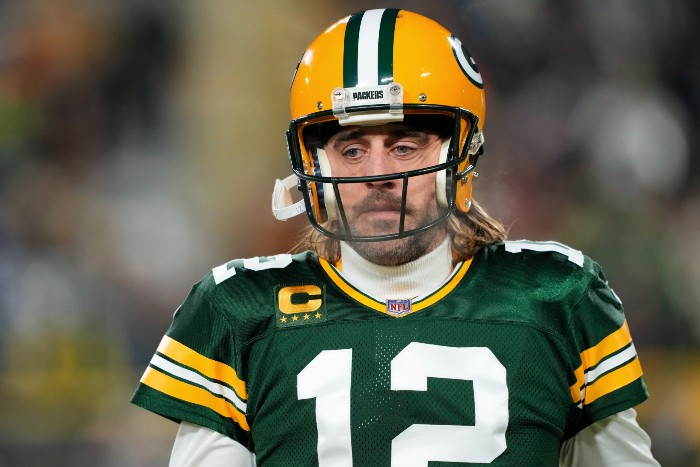 After a little under two years together — Jesus, it’s been that long already?! — Aaron Rodgers and Shailene Woodley have called off their engagement. She’s a clay-eater, he’s an anti-vaxxer. A relationship can only hold so much batsh*t. (TMZ)

Arden Cho reportedly won’t be in the Teen Wolf revival movie after being offered half the salary of her white co-stars. (Dlisted)

From Roxana: Soraya Roberts for LARB on the clothes that make and unmake Diana on screen. (LA Review of Books)

From Genevieve: One hell of a Sunday. Van Jefferson’s wife went into labor during the Super Bowl. This is how he found out. (Twitter)

From Steven: A priest said “we” instead of “I” for twenty years of baptisms and the Catholic Church has ruled all of them retroactively invalid, which means any of them who have died in the meantime have actually been in hell all this time. Now that’s a shitty… loophell. (CNN)

OK, so apparently the score to Andor is going to freaking slap. (Collider)

Why many of the “open everything” COVID-19 arguments are so dishonest. (The Present Age)

The Book of Boba Fett finale did better numbers than The Mandalorian season 2 finale? There’s no f*cking way that’s right. No way. (Deadline)

Welp, we found the first anti-vaxxer Yellowstone actor. I knew there had to be at least one of them. (Variety)

What are your thoughts on book-to-screen adaptations? Auntadadoom prefers an adaptation that takes its time. "And I especially like the space to experience the smaller moments and hear about Lady Catherine’s chimneypiece and the pigs getting into the garden…and you get those parts a lot more in a more spacious adaptation." Find out more in this month’s Quick Questions, like her desert island genre, her most recent best soup, and maybe give her some encouragement in her quest to finally get into Terry Pratchett’s Discworld. (Cannonball Read 14)

Llamareadsbooks loved the celebration of change in Chace Verity’s most recent installment of their cozy Canadian demon romance series, Match with the Demon. "It’s a good reminder that you get to continue choosing who you are, that whatever designations fit you once don’t have to fit you forever." Has a book helped you let go of something that didn’t work for you anymore? (Cannonball Read 14)

hi twitter I just learned that the UK edition of dollar tree is this and I may never recover pic.twitter.com/EegXUwFV32