Comic-Con: International San Diego is a massive, sprawling and totally overwhelming celebration of film, television, comics, and varying forms of pop culture and cosplay. At the end of this annual extravaganza, it might seem impossible to determine who had the best SDCC. Could it be any one of the exciting new stars who are being launched to super-stardom by the MCU’s Midas Touch? Could it be Tom Hooper, whose trailer for Cats stole the thunder from SDCC’s trailer drops despite not being at Comic-Con at all? Could it be certain Pajiba Overlords, who were living it up at exclusive parties and hanging with movie stars? MAYBE. But we’re pretty sure it was Kristen Bell.

Bell was on site to promote both the return of Veronica Mars and The Good Place. And while Comic-Con can be an exhausting marathon of press, parties, picture-taking, and panels, she seemed to live for every moment.

First up, at the Veronica Mars panel, Bell demanded that new season drop early on Hulu to celebrate her birthday. It was her birthday, but we got the gift.

Thank you @Hulu for the best birthday present ever. All episodes of @veronicamars are now streaming!

Then came The Good Place’s final Comic-Con panel, which was clearly very emotional. (Be sure to scroll through the pics for the full effect.)

She loves her Good Place castmates! And why wouldn’t she? They are funny and kind and really nice kissers.

And gang. She met Lin-Manuel Miranda. Remember how excited she was when she met a sloth? She’s declared L-MM “the new sloth.” So this is SERIOUS.

The following series of videos/photos is hilarious and adorable and envy-inducing. First, Bell is gawking at an unaware Miranda and is overwhelmed by the sheer sight of him. Second, he spots Bell and is giddy over his star sighting! (“He’s talking to me and I can’t hear him!”) THEN there’s HUGGING! And lots of “hi”s, because we all get a little starstruck sometimes.

Update from #sdcc2019 : Lin-Manuel Miranda is the new sloth.

I'll be fine guys. As soon as I can figure out how to breathe again.

And she wasn’t joking about it being her new profile pic. 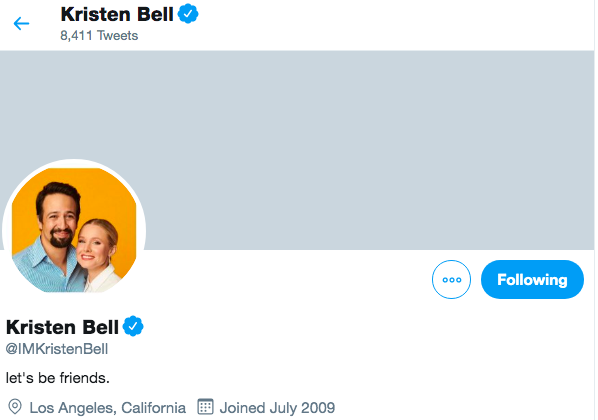 And she wasn’t alone in her excitement.

I don’t know if you’ve ever seen two total strangers scream “I Love You!!” at each other across a crowded room but this is the picture we took right after we did that. @IMKristenBell #SanDiegoComicCon2019 pic.twitter.com/4jCriLD2Be

Was I screaming? I thought my SOUL was SINGING! #SanDiegoComicCon2019 https://t.co/Wj32q9aGFS

So, to the jury, I present that Kristen Bell hands down had the very best SDCC.

However, our beloved Courtney Enlow came in with a close second.

Bit of a day. (Yes he’s as lovely as you hope.) pic.twitter.com/Nrad1HWT5S

← Taylor Swift Fans Are Mobilizing Against Kamala Harris | Tom Hanks Is Mr. Rogers in the 'A Beautiful Day in the Neighborhood' Trailer →