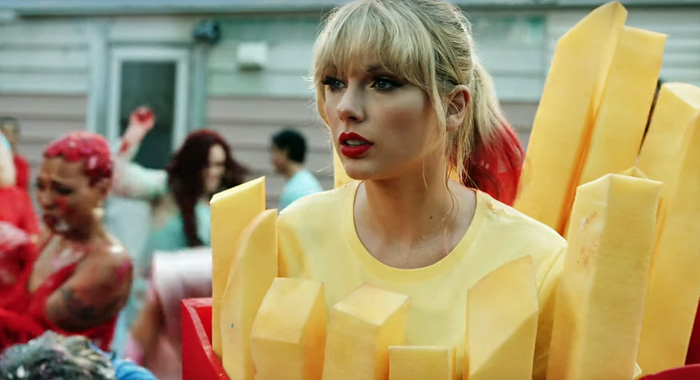 Kid Rock: Taylor Swift Is Only a Democrat so She Can 'Suck' Her Way into Movies

“First, you become French fries. Then, you seize the means of production. Then, you get #MeToo’d into Cats…”

For the record, the proper response to Kid Rock saying something political is to swat it away like a redneck mosquito full of Old Milwaukee and chlamydia then go about your day never once thinking about it again. But I hate myself, so let’s go ahead and take a look at his latest attack on Taylor Swift in all its technicolor misogyny and dumb.

Taylor Swift wants to be a democrat because she wants to be in movies….period. And it looks like she will suck the door knob off Hollyweird to get there. Oldest move in the book. Good luck girl.

Wow, Jesus Christ. This tweet really does play all the greatest conservative hits: Persecution complex, sexism, and absolutely zero idea how shit works. It’s also pretty random considering we’re at least two months removed from Swift doing anything even remotely political, but Kid Rock is old, so he needs a minute to react. As for why he felt the need to do so, well, his audience is mainly white trash Boomers who love a heaping side of racism next to their bucket of blue cheese.

And you, a Michigander, use the Confederate battle flag as a prop for your concerts because you want to be seen as a white supremacist because those are the only people who like your trash music… period.

Oldest move for a racist in the book.

Also, never forget that Kid Rock was part of this brain trust. Imagine the Large Hadron Collider, but instead of god particles, it’s full of mushroom penises and buck shot.

So let’s talk about Taylor Swift’s “politics,” which I don’t know why I put in sarcastic quotes because what she’s doing now is a lot better than her previous stance of total-ass silence. During the 2018 midterms, Swift finally took a stance and endorsed Tennessee Democrat Phil Bredesen in a race against Marsha Blackburn, which he ultimately lost. However, Swift’s endorsement was significant because, until that point, she was so apolitical that actual Nazis literally started worshipping her as their secret Aryan princess. Because that’s what happens when you don’t speak up. You get Nazis. It was also a bold move considering Swift made the transition from country singer to pop superstar, so it stands to reason that a significant portion of her audience leans to the right. Although, by 2018 it’s not like Taylor Swift would go homeless if she lost a demographic, but her activism did boost voter registration across the country, so again, I really shouldn’t be farting on any help we can get.

Jump to June 2019, Pride Month, and Taylor drops her video for “You Need To Calm Down.” In the immediate aftermath, there’s a nuanced debate on whether Swift’s video elevated the LGBTQ community or merely used them as props to promote two straight, white pop stars squashing their beef. — Katy Perry makes a glorified cameo. — But “You Need To Calm Down” is most likely what’s chapping Kid Rock’s ass, because showing queer people existing is cramming politics down people’s throats, but waving the Confederate Flag is just good old-fashioned fun. (It’s not. It’s racism.) Regardless, I’m going to use this simple and easy fact to shoot down his bullsh*t argument that Swift is only acting liberal so she can be sexually harassed into films:

Taylor Swift’s acting credits go all the way back to 2010, a solid eight years before she even dipped her toes in politics. More importantly, she’s one of the biggest pop superstars on the planet, so I’m pretty sure most studios would trip over every single dick to have a meeting with her even if she was promoting free assault rifles for babies. As for her most recent starring role in Cats, here’s a newsflash: She was cast three months before outing herself as a Democrat. It was already in the bag because she’s f*cking Taylor Swift. A multi-platinum artist starring in a theatrical version of a hit musical? You’d have to be a moron not to make that casting call. That said, if Swift is pretending to be a Democrat just to star in Cats, then maybe there is justice in the universe because this seems like a pretty fair punishment. She had this coming.

But, anyway, back to my main point: Kid Rock is a calcified turd wrapped in the American flag that no one should listen to. That’s mostly what I was trying to say here.

← Season 2 of 'Succession' Starts Sunday. Where Did We Leave Off? | Review: 'Dora And The Lost City Of Gold' Is Delicioso (Can You Say 'Delicioso'?) →