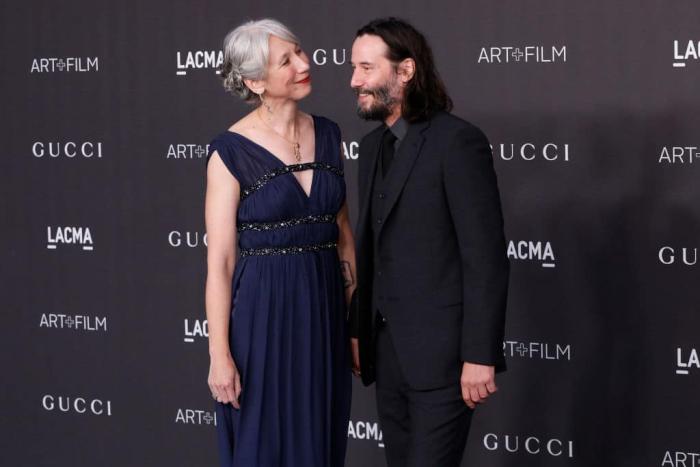 2019 has been a great year for Keanu Reeves and the world remembering how much it loves Keanu Reeves. What’s not to love? He’s charming, earnest, kills people to avenge his dead dog, makes wise comments about the afterlife, and is seemingly utterly free from f*ckboy tendencies. In a year where so many men disappointed us, there was something about the shining light of Keanu that kept us going. What could make him better?

How about Keanu in love with an awesome accomplished woman who’s age-appropriate for a man in his 50s?

Reeves attended the LACMA Art + Film Gala presented by Gucci in Los Angeles on Saturday with artist Alexandra Grant. The pair have previously collaborated on projects and they established the publishing house X Artists’ Books, dedicated to artist-centered works. She’s acclaimed and badass and gorgeous and look at how cute they are together!

Keanu Reeves has a girlfriend.

The internet united for Keanu Reeves and Alexandra Grant. 🙌🏼 pic.twitter.com/qHL1lRctNM


The internet, of course, went wild. We just want Keanu to be happy, dammit, but we’re also far too relieved to see a famous man in his 50s dating a woman closer to his age than that of his potential grandkids.

seeing this photo just made me realize how rare it is to see a male actor over 40 dating a woman his own age AND I AM EXTEMELY FUCKING HERE FOR IT they look so happy!!!🙏🙏🙏 pic.twitter.com/ufcN3O3YZ9

keanu wearing a shirt with the same design as alexandra’s tattoo that says ‘love’ yeah and I LOVE to see it pic.twitter.com/uuIRJ8Vk8o

I couldn't care less about Keanu Reeves but his girlfriend is lowkey looking back at the camera like "that's right, bitches" so I fully have to stan Miss Alexandra Grant pic.twitter.com/bKZOp7sTAu

I, too, celebrate Keanu Reeves not being a dirtbag and finding love in a woman within a decade of his age 🙌 https://t.co/j1pqzr2Bmc

Look, I fished out this 2011 pic of Keanu and Alexandra Grant from the interwebs for you. pic.twitter.com/a0XK1xlnz2

my hot take on keanu reaves:

Yes, I know it’s kind of depressing that we’ve set the bar this low for men. It shouldn’t be news that a man in his 50s is dating a woman in her 40s and celebrating that as some glowing sign of progressiveness is pretty sad. Still, admit it, you were kind of relieved when you found out Alexandra Grant wasn’t 25. This is where we are with Hollywood and misogyny: We just expect these men to get older and their girlfriends to stay the same age. Leo DiCaprio is the default mode, not the exception to the rule. So let us have this one for a while, okay? Besides, aren’t you delighted to see Keanu so happy?

← Daniel Craig Rejects The Notion That Phoebe Waller-Bridge Was A Diversity Hire For James Bond's 'No Time To Die' | Recap: 'His Dark Materials' Begins with a Whirling, Confusing Introduction to 'Lyra's Oxford' →