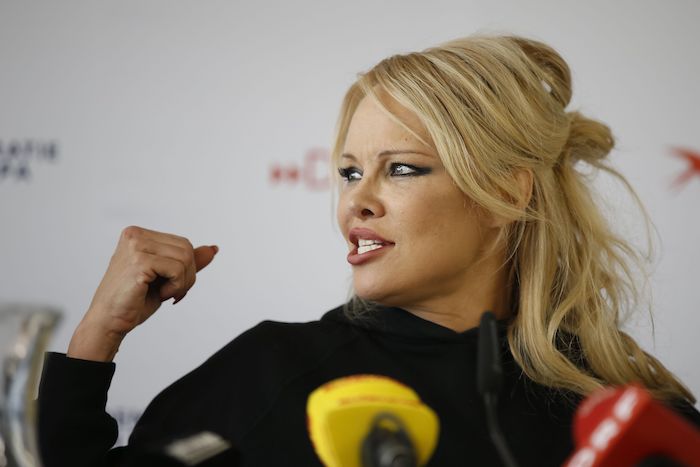 Something I have to remind myself frequently is that the assholes of the world believe they are the protagonist of their own story, just like you and me. As a fun way to break my spirit and faith in humanity, I sometimes try to put myself in a terrible person’s shoes and come up with the mental gymnastics they must go through in order to justify their behavior. Today, I don’t have to because what I’m about to present to you requires basically no empathy or any sort of critical thinking skills whatsoever. See, Jon Peters, the dude who was married to Pamela Anderson for less than a hot minute, was saddened and shocked when he came to the realization that she only wanted him for his money.

No duh, Jon! You’re more than 20 years older than her, a shitty Trump supporter, and you have terrible ideas. Of course, this wasn’t a love match, you dummy. You were moving your then-current girlfriend into your home when Pam proposed you get married, so you dropped her and went for Pam. What part of that equation screams “Togetha 4-Eva?!?!?!?”

NONE OF IT. Yet you still went crying to the press to shit all over her, because you got what you deserved and had the mediocre-white-guy-gall to be surprised by it.

The film producer, 74, told Page Six on Monday that Anderson, 52, had actually proposed to him over text.

“Needless to say that when she texted me that she wanted to get married, it was kind of a dream come true even though I was engaged to someone else and the lady was moving in,” Peters told the outlet.

He also alleged that Anderson married him to pay off her debts.

“I dropped everything for Pam,” he claimed, according to Page Six. “She had almost $200,000 in bills and no way to pay it so I paid it and this is the thanks I get. There’s no fool like an old fool.”

Pam Anderson got paid for her marriage, and you know what? I can’t fault her for that. Anyone who’s willing to kick their current lady-love to the curb on a whim because someone f*cking texted them about getting together? You get what you get—and apparently in this situation what Jon Peters got was relieved of $200,000 his probably not-so-hard-earned ducats.

I’m sure somehow, someway, John will live to fight another day. As for Pam? Well, she’s posting a lot of vague shit on Instagram because some people hate it when women bilk rich men out of their money because they’re so quick to throw it away. However, as a chaos demon, my thoughts are: ¯\_(ツ)_/¯

← 'Below Deck' Reunion: Why is Andy Cohen Stumping for Ashton Over His Abuse of Kate Chastain? | Macaulay Culkin Recalls His Relationship with Michael Jackson, Chides James Franco →