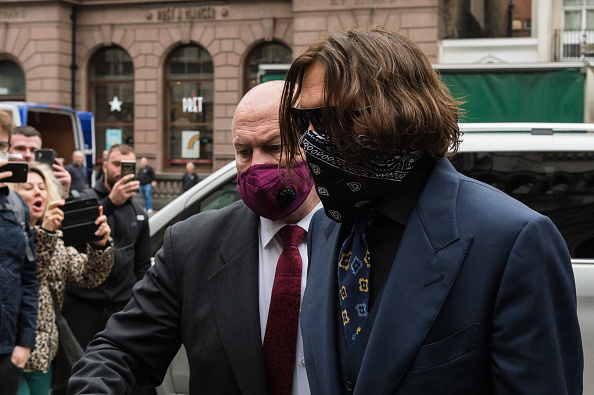 Over in the UK this week, Johnny Depp is suing The Sun for libel after the paper accused the Pirates of the Caribbean Actor of abusing his ex-wife, Amber Heard. Specifically, Depp is suing over the following headline in The Sun: “Gone Potty - How can JK Rowling be ‘genuinely happy’ casting wife beater Johnny Depp in the new Fantastic Beasts film?”

The case has been in the offing for over two years, and this week, Depp has been testifying in court. Depp strenuously denies he was abusive, and over the course of three days in court, the picture of himself that he’s trying (poorly) to paint is that of Amber Heard’s victim. The case itself is less about the money — the court costs would probably be more than any award, although loser also has to pay court costs for both sides — and more about positioning himself in his $50 million suit against Heard over an op-ed she wrote in The Washington Post, where she described herself as a victim of domestic abuse (Depp is suing for defamation). It’s easier to win in these libel cases in the UK — surprising given the tabloid culture over there — and I suspect Depp thinks a win in the UK will help position him in the case against Heard, or at the very least, help rehabilitate his sullied image. More than anything, it’s about Depp trying to protect his tattered reputation.

So far, it’s not going well for Depp.

The trial has only dredged up more allegations, put in the form of legal documents in a case against The Sun where Heard is not even technically a party to the suit (though she won the right to be in attendance). She claims that Depp abused her for 18 months prior to the marriage, and then throughout the marriage. He claims otherwise, saying that Heard was the abusive spouse. Depp has presented legal filings supporting his claims, which Johnny Depp Twitter has treated as proof, but that’s not really how it works. Depp can claim that Heard smashed a vodka bottle on his finger, and he can claim in legal documents that he hid from her in all of his home’s eight bathrooms, but putting it in writing and submitting it to the court does not make it true, as Johnny Depp Twitter keeps trying to suggest. This, for instance, is how Johnny Depp Twitter is trying to characterize a photo of a blacked-out Johnny Depp.

This picture of Johnny Depp curled up sleeping in the corner like a wounded animal is heartbreaking. A dangerous man?….. A broken man. #justiceforjohnnydepp #AmberHeard pic.twitter.com/tdjzFzFlOq

Meanwhile, The Sun is putting forward fourteen (14!) separate allegations of domestic abuse to support its case, including — among other allegations — that Depp held their dog out of a window of a moving car; that he rough handled a woman who was suggestively touching Amber Heard while they were high; that he threw stuff at her, hit her and kicked her while on a plane; that he threw a champagne bottle at her head on her birthday; and that he essentially held her hostage for three days in Australia before breaking in a door where Heard had barricaded herself. He then “pushed her to the ground, choked her and spat in her face, shoved her into a ping-pong table, threw bottles through a glass door, tore off her nightdress, and grabbed her by the hair and choked her against a kitchen fridge.”

Depp denies that he has ever hit Heard, while also trying and failing to introduce texts between Heard and James Franco and Elon Musk, as though the recipients of Heard’s texts during their marriage somehow proves that Depp was not abusive. (Sounds a lot like slut shaming, to me (and the court agreed).)

So far, during the course of the trial, Johnny Depp has insisted that he is not violent, while also admitting to excessive drinking and drugs, as well as a history of trashing hotel rooms, which doesn’t particularly sound like the “southern gentleman” that Depp claims he is. Depp admitted to using cocaine, ecstasy, LSD, mushrooms and cannabis, as well as spending $30,000 a month on wine before he entered rehab; he admitted to “destructive behavior”; and characterized $10,000 of damage to a hotel room as “a few dents.” And yet, Depp insisted he didn’t have an anger problem, denying that he threw a bottle at ex-girlfriend Ellen Barkin, who testified otherwise (why would Barkin lie? Also, don’t f**k with Ellen Barkin).

“When one’s aspiration is to be a great gentleman, to be a great southern gentleman, that doesn’t exclude you from the family of humans who have moments of frustration,” Depp said in court, underplaying a history of destructive behavior and allegations of violence.

On the second day of Depp’s testimony, an email Heard wrote during their marriage was introduced, and it outlined some of Depp’s more egregious behaviors, how he would pass out and defecate himself, how assistants would have to break down locked doors to wake him up, and how Depp would forget it all. “I watch as other grown men have to wipe you, basically. And you get the convenient benefit of never having to remember it. That’s nice. For you.”

“I feel like the biggest idiot in the world,” she wrote in the email. “I have put up with so much. I have cleaned shit, vomit and piss up both literally and figuratively. I have been accused of crazy shit - some of which I deserved - only to never hear an apology for your booze-fuelled zeal. You have hit me repeated. Something you should Never have done. What a fucking man you are. And NONE of this would be possible without the booze and drugs. NONE.”

Depp’s defense team characterized the email — and other actions — in a conspiratorial fashion, claiming that Heard had been building a dossier on him all along “as an insurance policy for later.”

Even as Depp admitted to frequently blacking out, he denied beating (or kicking) Heard during drunken outbursts, essentially suggesting that, even though he doesn’t remember, it was impossible because it wasn’t in his nature (although trashing hotel rooms and repeatedly drinking to the point of blacking out was in his nature and yet somehow inconsistent with abuse?). In other emails, Depp apologized to Heard for, among other things, behaving like a “angry, aggro Injun,” though he claimed in court that he only apologized to “placate” Heard.

Meanwhile, in texts between Depp and actor Paul Bettany, Depp also expressed anger and frustration at Heard for trying to get him to stop drinking and doing drugs, calling her the “moral police,” and suggesting to Bettany that they “burn” the “witch.”

All of which is to say: I know what Johnny Depp had hoped to get out of this trial — a court to clear his name — but so far, Depp’s own testimony has done him little favor. Basically, his entire case is, “Yes, I have a history of destructive behavior, and yes, I sometimes get angry, and yes, I drink to the point of blacking out, but no, even though I don’t remember the incidents that Heard describes, there’s no way I would ever hit her because I’m a ‘Southern gentleman.’”

It’s a good thing that there’s no history of violence and abuse among “Southern gentlemen” in the United States.

Background via The Guardian

← Review: Theo James And Martin Stacy Star In The Sci-Fi Drama 'Archive' | Some Moments Of Zen In The Form Of Twitter User's Pets And Their Pop Culture Namesake →