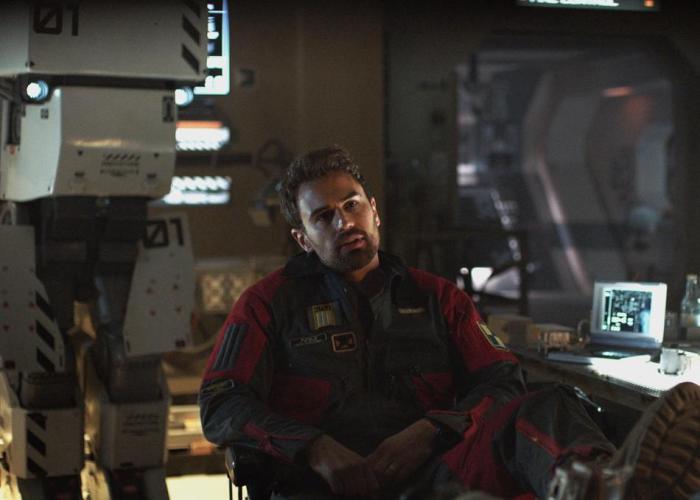 Grief is a savage thing that snags at our souls and tears at our hearts. We might like to think we can outrun it or outwit it, but then it catches is and claws us into a dark abyss of despair. Still, we dream of escape. Such a dream plays at the center of the sci-fi drama Archive, in which a man tries to cheat grief and death with groundbreaking tech. Making his feature directorial debut, writer/helmer Gavin Rothery carves out a tale that flirts with the familiar and finds the humanity in the machine.

Divergent’s Theo James stars as introverted engineer George Almore, who resides in a not-so-distant future in a remote research facility where he pushes the bounds of artificial intelligence. His only companions are a pair of robots. One is a lumbering unit who speaks through beeps; the other is a sophisticated automaton that has the blocky appearance of a LEGO figure, but defined fingers, and the brain of a smart but rebellious 15-year-old. Together, they make up a motley family, with the sister bots acting as doting daughters to their brooding human-dad. Occasionally, their lives are disrupted from calls from humans outside, an uptight supervisor wanting constant status updates, a troubleshooting team, and George’s teary-eyed wife (Stacy Martin). But there’s something strange about her calls. They feel stunted, like they might be recordings instead of a live conversation. Soon, we learn why.

She has died, and what remains of her consciousness has been uploaded to the archive, a service that essentially stimulates the brain for a few years after death to allow the grieving family to interact and slowly let go. But George isn’t ready to say goodbye. That’s what his girls are for. They are prototypes for a vessel into which he could transfer the consciousness of his dearly departed partner. J1 learned to walk and J2 learned to speak so that J3 could run and resurrect the dead. But as George develops his most complicated prototype yet, the sanctity of his sanctuary is threatened by nosy rivals, greedy superiors, and one heartbroken robot. Will he be able to finish J3 before he’s found out?

Any sci-fi fan worth their spice will recognize some plot points seemingly plucked from some recently heralded film and television. The concept of the archive was thoughtfully explored in Owen Harris’s soul-crushing Black Mirror episode “Be Right Back,” which starred Hayley Atwell was a widow who resurrects her husband (Domhnall Gleeson) through a bot that mines his personality from social media posts. The remote location with a dashing tech genius and a harem of lady bots, who defy and dance to his pain and pleasure, might be snatched from Alex Garland’s Ex Machina (another Gleeson gem). The intense isolation pushing a man to peculiar partnerships might remind you of Duncan Jones’s Moon, on which Rothery worked in the art department. Then, of course, the robot who learns to feel is a long-treasured science fiction trope. There’s comfort in this familiarity, as if Archive is in conversation with these other titles, weighing ideas of how tech and mankind collide for better and worse.

Rothery eases his audience into this futuristic world, gently unfurling muted colors of a cement-walled facility, and the carefully constructed by clunky robots who shuffle about it. The hard angles of the walls reflect the blocky structure of his first two daughters. But as J3 develops, the look shifts. She is held in a circular rig that mirrors the human curves he’s deftly detailed in her design. When she feels pain or panic, the world around her projects it with screaming sirens and flashing red lights. She is the goal but also a warning.

One major snag; however, is James. The blandsome leading man plays George as a stoic and exhausted caretaker, who lumbers from one task to the next with all the energy of a dying turtle. He is greyer and duller than any of the film’s sets, and essentially fades into the background anytime one of George’s robots are around. To be fair, their performances are pretty spectacular.

Martin pulls double-duty playing George’s wife in flashbacks, then her AI reconstruction in the present. Like Alicia Vikander in Ex Machina, her beauty is partially obscured through robotic panels. Yet Rothery doesn’t lose the details of her visage or physicality, making simple moments sing and sting. One such instance is when J3 meets her oldest sister J1. The puttering bot has strong legs but no arms, so when J3 instinctively reaches out to shake hands, it’s awkward. Martin’s jolted motion and stunned expression relay this without a human blush. Remarkably, J1’s limited shuffle and irked chirps express her own frustration. Then James numbly mutters some half-hearted promise about building her arms…someday.

Things get a little lazy when Rothery relies heavily on a pop music soundtrack to carry emotion through uninspired montages, including a dance number that feels like a pale imitation of Ex Machina’s “disco non-sequitur” (to quote Oscar Isaac). Then as J3 transitions from bot to “real girl,” there’s an awkward phase where she looks like a cheap cosplay, all painted white with a cheap white wig. The irony is the strongest performance is when the actor’s face is never seen.

Speaking in a robotic tremble with an English lilt, J2 is the heart and soul of Archive. She’s introduced as George’s lab assistant and sidekick. He treats her with the stern direction a military father might address a daughter, but her intense jealousy of J3 suggests this robo-girl has crush on her “dad.” She went from being his special girl to his discarded project. So, she petulantly sabotages things for some attention. She begs for him to improve her so she can be loved again. She has no mouth or no eyes. And yet she evoked the greatest empathy, with a downcast head, a shocked stumble, or a wounded plea.

The inhumanity of this demotion cuts deeper than George’s grief, which seems to be by design. To run from his pain, George chucks himself into work and into reclaiming what he lost. In doing so, he loses site of what he has. He becomes less human than androids he has built. From a sci-fi angle, that’s great stuff. However, James, who also produced this pic, doesn’t have the charged screen presence to pull off such a muted role. So, rather than being riveted by the whole, I was bored for all the George bits.

Archive is at its best when it leans into its machines and away from its lackluster leading man. There, Rothery finds something fresh amid his allusions and tropes. There lies grace, wonder, and a glorious agony. And all of this—for better and worse—leads to a finale that is at first frustrating, then flummoxing, then pretty damn fantastic.

Archive opens in Virtual Cinema Screenings, On Demand and digital on July 10.

← Cancel Culture Doesn't Work the Way J.K. Rowling or Harper's Magazine Think It Does | Johnny Depp's Libel Trial Over Allegations of Domestic Abuse Against Amber Heard Is Not Going Well →