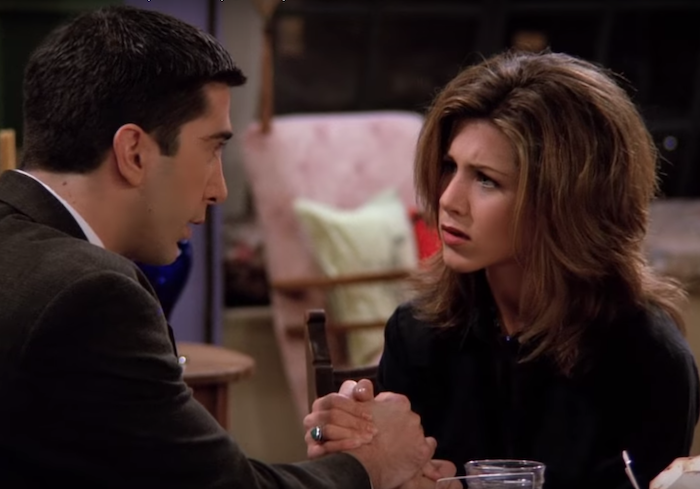 This is the week of beloved TV couples’ reckonings. I’ve already explained how Jim and Pam would be dunzo, and now it’s time to tackle Ross and Rachel (with a little help from a Friend.)

Yes, as my beloved People.com has the publicist-approved scoop, as they always do, by sharing Aniston’s Instagram comments to a former Bachelorette, because 2019 is a world we are forced to live in.

Former Bachelorette Kaitlyn Bristowe was one of the multitudes of fans to get excited about Aniston’s arrival on Instagram, and commented on her inaugural post — a selfie with the entire Friends cast — asking Aniston about the current relationship status of her beloved Friends character, Rachel Green, and David Schwimmer’s character Ross Geller.

“ARE YOU AND ROSS STILL TOGETHER!!???” Bristowe, 34, asked in her comment. Aniston replied, saying, “well we’re on a break.”

There is absolutely no way Ross and Rachel made it past 6 months together once she stepped off that plane. Those two lived for the drama. In the 15 years since the finale, I’m sure they broke up to make up (and made up to brake up) a half dozen times, and by now, after 25 years of off-again, on-again BS they’re finally, really done, save for the occasional wine-induced hate f*ck.

Rachel is probably single, maybe casually dating the odd dude, undoubtedly pushing their daughter Emma, a senior in high school, to go to a school nearby so she can visit her often, and spends the weekends occasionally going out to Monica and Chandler’s house out of the city (they’re definitely still together) to chug wine and awkwardly bitch about Ross to his sister. Ross most definitely went back to dating his students because remember that was a thing he did with no remorse, pressures Emma to go into paleontology for her degree and blames her mother when her interests lie elsewhere. He rages at Rachel, late at night, when he remembers he has a daughter and looks at her Instagram account and takes issue with what she’s posting. Emma is naturally a wannabe influencer, a result of her mother’s support and her father’s indifference. Emma never sees her half-brother, Ben. No one ever sees Ben, except for the yearly email from his Aunt Monica asking him if he’s coming for Thanksgiving. He never does.

Phoebe and Mike, Monica and Chandler get together about once a year to have dinner and marvel at how badly things got between Ross and Rachel so they don’t have to talk about the things they no longer have in common with each other. They leave these dinners promising to do them more, yet they never do.

Joey never came back from LA but he’s going to have an awkward run-in with Emma in 5 years, out there. How you doin’, indeed.

Gunther still works at Central Perk, which is closing this week and is going to get gut-rehabbed and turned into a Starbucks Reserve that will serve wine. Some 28-year-old finance bro now rents out Monica’s apartment for $8,000 a month and throws ragers every weekend. The neighbors hate him. Ross stares out wistfully from across the street wishing he could be invited over but he never is. No one wants to party with him, and he will never move out of that apartment because he can’t afford anything else and besides, he has nowhere to go.

I’ll be there for you, is dead, friends.

However, Janice has a very nice life and is pretty happy.

Anyway, Jennifer Aniston agrees that they wouldn’t be together right now. Happy Thursday! This has been your reminder that time marches on, relationships can’t last forever, and Ross and Rachel never could have lasted!