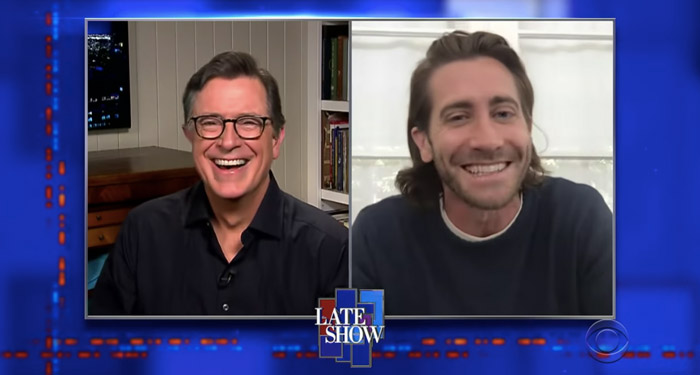 Jake Gyllenhaal has spilled details on that shirtless handstand challenge that had us all entranced a few weeks back. While appearing on The Late Show with Stephen At Home, the Spider-Man: Far From Home star shared how he tried to make the handstand challenge his own, why we have Ryan Reynolds to thank for the eventual Gyllenhaal thirst post, and how Hugh Jackman responded when the gauntlet was thrown down.

Colbert begins by setting up how this all began. Tom Holland, Gyllenhaal’s Spider-Man: Far From Home co-star—with whom he is having a “full romance” (GYLLENHAAL’S WORDS! SHUT UP AND LET ME HAVE THIS!), did the handstand challenge, which is putting a shirt on while doing a handstand. Then Holland challenged Gyllenhaal and Ryan Reynolds to do the same. The Deadpool star responded with a deadpan ‘No.’

With Reynolds perfecting the rejection, Gyllenhaal felt pressured to pull it off (or on?). Still, he tried to do a gag version, before being outsmarted by his smartphone. From there, he challenged his sister, Secretary luminary Maggie Gyllenhaal, rapper 50 Cent, and fellow superhero star Hugh Jackman to take it on.

50 Cent never replied. Gyllenhaal followed up with Jackman via email, and got the simple response, “I hope you’re well.” That’s about as classy a “hard pass” as you can get. Meanwhile, Maggie delivered.

Next let’s get her on Colbert’s show so we can hear how Jessica Chastain, Sarah Silverman, and Alexandria Ocasio-Cortez responded. Then, invite Simone Biles, who took the handstand challenge to the next level, not leaning on a wall and taking off her pants hands-free!