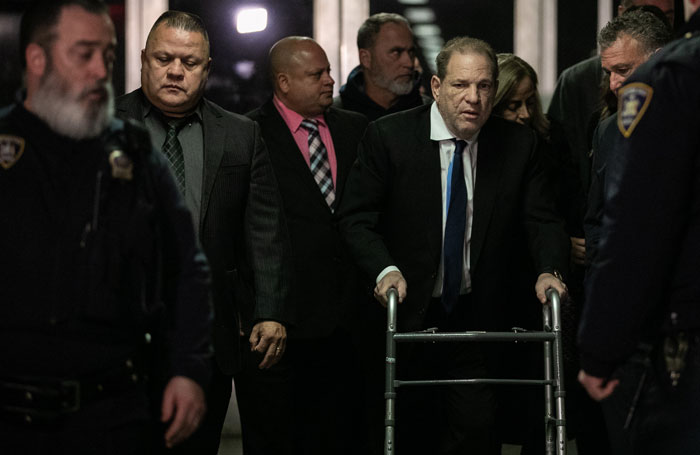 Earlier this week, alleged serial rapist Harvey Weinstein turned up to a New York City bail hearing with a walker. This caused some sites to speculate the court case is having a negative impact on his health. However, there were others who wondered if Weinstein was using the walker as a prop to garner sympathy from the press, public, and court. Now, new photos might spur further skepticism about Weinstein’s need for a walker.

Page Six posted pics of Weinstein at a Target in Mount Kisco, NY, where the disgraced Hollywood mogul is seen walking without the aid of a walker.

These pictures were taken before Weinstein’s NYC court date, but the exact timeline is fuzzy in Page Six’s account. However, they note the bail hearing wasn’t the first time Weinstein was spotted with a walker. Their source saw Weinstein with a walker days before these Target snapshots when the alleged sexual predator was “shuffling into a meeting with a potentially hostile group.”

The source concludes, “He’s just using it for sympathy.” However, Weinstein has been suffering from a back problem that required a three-hour bilateral laminectomy operation on Thursday. The New York Times previously mentioned this scheduled procedure in its coverage of the bail hearing. Reportedly, the spine issue stems from a car accident last August.

Following his latest court date, Weinstein’s attorney Donna Rotunno said of the walker, “We wanted him to use a walker last week, and Mr. Weinstein didn’t want the press to think he was seeking sympathy.” No comment has yet been offered from Weinstein’s reps about the walker-free Target pics.

Pajiba reached out to a doctor familiar with similar spinal surgeries to get a better understanding of this situation.

For the record, when our source saw the shots of Weinstein and the walker at the hearing, he thought it was a ruse to score softer media coverage. However, when asked about the surgery Weinstein underwent, the doctor said, “That’s a major spine surgery. You don’t do it unless a patient is experiencing serious symptoms.” These symptoms include severe pain in the legs when walking. By the doctor’s estimation, Weinstein’s use of the walker earlier this week is likely legit.

As to the Target photos, we don’t know how long Weinstein was in the store. Our doctor speculated that a short trip might have been feasible without the walker. As such, these pictures are not a smoking gun to prove disability deception. But really, it doesn’t matter.

Weinstein has been accused by 87 women of sexual misconduct that includes harassment, non-consensual touching, and rape. For decades, he built his career, wealth, and fame through bullying, blacklisting, and worse. He will face criminal charges for rape in New York this January thanks to two of his alleged victims coming forward. 30 more are suing him for sexual misconduct right now. Whether or not Weinstein is lying about the walker is irrelevant. But he’s probably not.