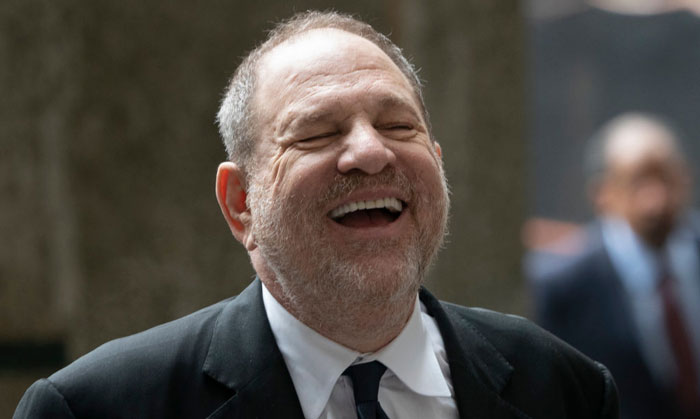 This Week In 'Seriously, F*ck That Guy': Roman Polanski, Harvey Weinstein, And The Creep Who Groped A Reporter On Live TV

Man. It’s a bummer to bring this round-up back, but this week it’s a necessity. So here’s the latest on horrid creeps, alleged and otherwise.

—Admitted child rapist Roman Polanski has been accused of raping French actress Valentine Monnier in 1975. This would have been two years before he drugged and raped a 13-year-old girl in Jack Nicholson’s Los Angeles home, a crime to which he pled guilty before fleeing the country to escape conviction. Monnier is the sixth person to come forward with a rape allegation against the filmmaker. (Variety)

—Alleged serial rapist Roman Polanski is mad that another rape allegation against him has come to public attention. Mad at himself for being an alleged serial rapist? Nope. He’s mad at the media for “trying to make [him] into a monster.”

He’s also miffed at Harvey Weinstein. Not for all the alleged sexual misconduct, but because the former Hollywood heavyweight labeled Polanski a “child rapist” to hurt Polanski’s 2003 Oscar campaign for The Piano. That’s where Polanski’s priorities are right now. (THR)

—Speaking of alleged serial rapist Harvey Weinstein, he and the board of his now-bankrupt studio The Weinstein Company have reached a tentative deal with 30+ victims of his alleged sexual misconduct. The good news is it will give these women a $25 million settlement. The bad news is … a lot.

1) As part of the deal, Weinstein will not have to admit to any wrongdoing.

2) The money paid out isn’t his. It would be paid by insurance companies who repped TWC. (NYT)

—Weinstein’s facing rape charges in Manhattan criminal court, from two separate women. This week, he faced a judge for reconsideration of his bail, which was raised from $1 million to $2 million. This was in part because it appears the alleged sexual predator has been toying with his ankle monitor. According to prosecution, in less than two months, the monitor went offline 57 times, meaning New York authorities didn’t know where Weinstein was 57 times. His defense team blames bad signal service in the NYC suburb of Bedford, where he currently lurks. (NYT)

—The other thing about this alleged serial rapist’s latest court appearance, he turned up looking like this:

Arriving in an oversized coat, sneakers, and a metal walker, Weinstein scored sympathy from news outlets who took this as “an apparent sign of the disgraced movie producer’s deteriorating health.” (CNN)

According to his attorneys, Weinstein is having back surgery this week. Which might explain the walker, but not the costume. The judge was unmoved, warning the alleged serial rapist that his absence at his January 6 trial would not be excused. “Should you fail to appear for any reason that is voluntary, this trial will continue in your absence,” the judge declared, “If you have further medical issues, the court will not be terribly understanding.” (NYT)

—Weinstein has tried a similar sympathy stunt before. In May, he showed up to a court date “ashen, dazed” and “leaning on two members of the NYPD investigative team” as he entered the packed-with-press courtroom. (Indiewire)

—But don’t cry for this creep. He’s since been seen jaunting around the Upper East Side, returning to the scene of one of his alleged crimes. (Daily Mail) (H/T Kate Erbland)

—Plus, the multi-million dollar lawsuit and criminal case over dozens of allegations of sexual misconduct and rape hasn’t kept Weinstein from enjoying the nightlife. He’s recently been spotted at NYC’s Actors Hour, where comedian Kelly Bachman took the chance to address the rapist elephant in the room. (Pajiba)

—In less-famous (or less infamous) creep news, the runner who groped news reporter Alex Bozarjian on live television has been identified. 43-year-old youth pastor Tommy Callaway ran up behind Bozarjian as she reported on a fun run in Savannah, Georgia, and slapped her hard on the butt.

Here is the video along with Bozarjian’s tweeted statement about the incident.

—Callaway defended himself on Inside Edition, claiming he was planning to wave at the camera but got “caught up in the moment.”

The man accused of slapping @wsavalexb's backside while she was on the air is telling his side of the story.

In an interview with @InsideEdition, 43-year-old Tommy Callaway says he went to wave to the camera and got caught up in the moment. pic.twitter.com/8zQsnZ7HWs

The above @CBSThisMorning tweet is rightly getting dragged for being trash.

You misspelled "caught on film" as "accused." You may want to fire everyone that thought this tweet and story were worthwhile.

So not only is he a sexual assaulter, he's also a liar and gaslighter.

And how major news organizations like CBS enables them.

F*ck all of these guys. F*ck them and every man like them who feels like he has the right to treat any woman’s body as his personal playground, regardless of consent or concern. And f*ck them, because they don’t get the final word here.

We leave you with Alex Bozarjian’s interview on CBS This Morning, which she shared on Twitter.

"It's not okay to help yourself to a woman's body just because you feel like it… in order to make any kind of change, you have to be a little bit drastic. And you have to… chip away at this toxic culture that permeates our society." — @WSAVAlexB pic.twitter.com/tYsvu0uFiW