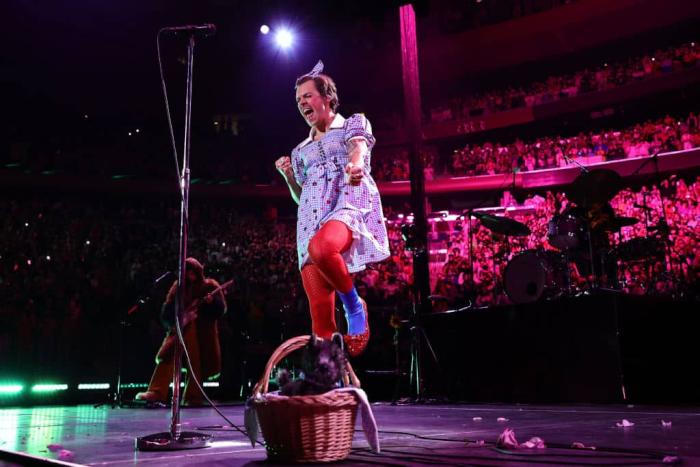 Harry Styles appeared on the cover of Rolling Stone this month and, of course, the internet went bananas. He has that effect on people. Along with being asked about his career and relationship with Olivia Wilde, he was questioned on the accusations of queerbaiting he’s faced over the past few years. Some claim that he is profiting off the LGBTQ+ community through his gender fluid approach to fashion and rejection of labels for personal identities. Styles replied, ‘Sometimes people say, ‘You’ve only publicly been with women,’ and I don’t think I’ve publicly been with anyone. If someone takes a picture of you with someone, it doesn’t mean you’re choosing to have a public relationship or something.’ I’m sure Wilde would have some problems with that but it does highlight the unfair standards for proving one’s sexual identity that many celebrities face.

Coming out remains not only a deeply personal act but a charged political one, particularly for people with even a sliver of public recognition. It wasn’t that long ago that coming out (or being outed) could end one’s career. It’s still a decision that carries a lot of risk. We don’t have a lot of publicly out A-List stars, for example. It’s still illegal to be gay in some countries, and anti-queer legislation has spread like wildfire across the U.S., with trans people and children targeted endlessly. It’s no shock that we crave powerful representation that offers a public rebuttal to such hatred, even if that is a lot to put onto one mere mortal’s shoulders.

The concept of queerbaiting originated in fandom, a means to describe the ways that certain kinds of entertainment hint at queer romances among characters then don’t follow through on it. Sherlock is considered a major example of this thanks to the frequency with which it noted how romantic the central dynamic seemed, all while the showrunners denied that this was their intention. The idea of a same-sex relationship is teased, or many queer-coded tropes are utilized, then heterosexuality wins the day. It can be exhausting to deal with as a viewer. We’ve all had that experience of seeing a story unfold, hoping that it could develop into an LGBTQ+ narrative, and seeing those hopes be dashed.

Inclusive representation is slowly getting better in mainstream pop culture but the fear of queerbaiting is always hovering overhead. Think about every time Disney or Marvel promised some ground-breaking moment of LGBTQ+ romance then offered a quarter of a second of absolute nothingness that could easily be cut out for international distribution. That issue is less queerbaiting than a signal of how industry awareness of the pink dollar - the name given to the immense and sought-after purchasing power of the LGBTQ+ community - doesn’t line up with their corporate intent. They demand all the acclaim and bravery for committing to showing two women kissing but don’t see the issue in it being a half-second moment between two unnamed characters in the background.

All of this can make a viewer uneasy, on edge. Moments of queer coding are seldom given the benefit of the doubt because we’ve been down this path way too many times. Corporate entities seldom earn the benefit of the doubt but to see that cynicism applied to people simply trying to live their lives is a whole other problem. Getting mad at Disney makes sense. Being furious at a person for dressing androgynously or displaying affection to friends of the same gender does not.

When Rebel Wilson was forcibly outed by some creeps at an Australian newspaper, I wrote about how, so often, the pressure around outing comes from those within the LGBTQ+ community. It was gay writers like Michael Musto who talked about Ellen DeGeneres and Rosie O’Donnell being gay long before both women came out publicly. YA author Becky Albertalli was forced to come out as bisexual before she felt ready because many queer readers claimed she was profiting from them by writing LGBTQ+ stories while presenting as a cishet woman. It is true that so much of LGBTQ+ cultural history has seemingly been defined by cishet voices perpetuating stereotypes and being amplified well over the marginalized communities they claim to represent. I’m not sure, however, that demanding a blanket status of absolute outing with no exceptions in the name of inclusivity makes much sense. You may think it’s safe to push someone out of the closet. It seldom is.

Harry Styles, for example, has faced intense pressure over both his sexuality and presentation as a desirable male figure since he was a teenage boy. He was 16 when he first appeared on The X Factor and was almost immediately catapulted into the public eye as one of five ideal crushes for the teen girl market. The press obsessed over his love life, including his brief relationship with the late Caroline Flack, who was in her early 30s at the time. To this day, a loud contingent of his fans spread increasingly outlandish conspiracies centered on the idea that Styles is in a relationship with Louis Tomlinson and that every woman both of them have dated over the past decade is either a PR plant or some sort of Medea-esque temptress of destruction (and that Tomlinson’s own son is either not his or a doll. Yeah, that whole mess.) Styles’ current girlfriend, Olivia Wilde, faces virulent abuse from some of his fans. He’s still part of an industry that retains an immense level of hostility towards out LGBTQ+ people. Can you blame him for not wanting to make every detail of his private life a talking point for others to debate?

But even if none of this happened, Styles and every other queer person does not owe anyone an explanation of their sexuality. You do not have to adhere to a specific and stifling set of rules to justify your identity. To explore your gender and sexual status, whether it be through the clothes you wear or the work you do, is not queerbaiting. Your queerness is always valid. It’s not dependent on it being explicitly declared and performing to desired expectations. To force ‘rules’ onto the act of being queer misses the entire dang point of liberation.

I understand the desire to seek kinship with someone like Styles, who is extremely famous and pushing against gender norms in a way that musicians like him have done for many decades. It can feel unfair that Styles is rewarded for wearing boas and pink while our community faces claims of child grooming for doing the same thing. The fight on the streets for the right to live freely isn’t actively helped by a megastar’s Vogue cover shoot. But to shut the doors of queerness to supposed outsiders sets a bad precedence, one that only exacerbates the structural forces that hurt us all. Our community should be allowed to flourish and that requires the grace to allow everyone the space and time to come to their identities.


← In 'House of The Dragon,' the Iron Throne is Sharp as Ever | Spoilers: 'Look Both Ways' Finally Answers Whether It's Better to Have Kids or Be Childless →