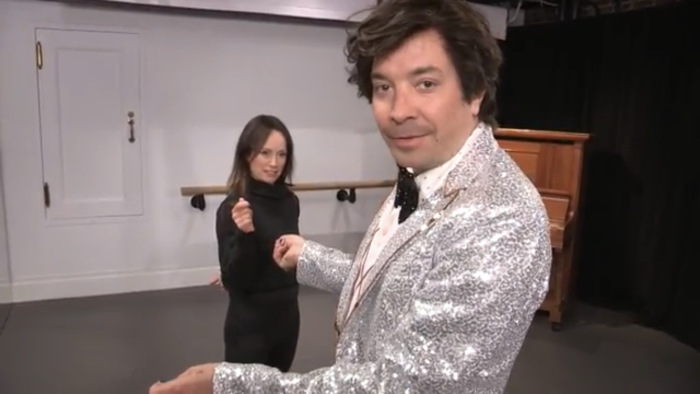 A good portion of my pop music knowledge comes from parody. Not all of it. Every now and then I’ll hear or see something and it turns out to be new and sticks in my brain. Also, on occasion, I’ll learn about someone well after they’ve been established. For instance, have y’all heard of Lady Gaga?? She’s pretty good! Otherwise, I’ve learned about most songs and artists through Weird Al polka mixes, SNL impersonations and now, a Jimmy Fallon sketch.

I am vaguely familiar with Harry Styles. Aside from hearing that “Watermelon Sugar” song on the radio while driving, seeing the “controversy” over him wearing a dress, and being made aware of his current, possible, maybe relationship, I know nothing. I don’t know what he sounds like, where he came from, when he started being famous, etc. I was legitimately convinced at one point that he was a former member of One Direction.

So! Last night, Jimmy Fallon has a sketch on The Tonight Show where he impersonated Styles. This is my gateway in! Finally I can say “Yeah! I know who that is” to my niece and look really cool (or dorky). This is what I’ve gathered so far.

Excuse me if this all sounds a bit ignorant. This isn’t a bit, but I didn’t want to do any more research after watching the sketch. Speaking wise (as I’ve said, I have at least heard him sing one song) I guess he sounds like Ringo Starr a little? Jimmy’s accent while portraying Styles is pretty darn close to a Ringo, if not a little toned down.

Next, it appears that he’s a pretty snazzy dresser. I kind of already assumed that, as I’ve seen the dress photo and he looks rad as hell, but Jimmy has him wearing a white tux with a bedazzled jacket and describes it as “walking to the mailbox clothes.” My guess would be that he’s known for some over the top outfits, which, honestly, I’m on board for.

Finally, I’m gonna take a shot in the dark and assume he’s a bit of a heartthrob. Jimmy does several playful smolders that got me laughing pretty hard. So, I’m assuming Harry is pretty well sought after. Mayhap even some sort of sexual icon?

So that’s it! I think I’m getting a clearer picture, though I’m still a bit in the dark as far as his “origin story” is concerned. Will I look any further going forward? Probably not. I’ve heard that Watermelon song and did… not care for it. But maybe I’ll look up an interview or two.

Sometimes, I like not knowing certain things, especially when it comes to pop culture. Other times it makes me feel like a real dweeb. For now, I think Harry Styles will fall into the former. Someone I’m vaguely familiar with. But ask me again in seven years.