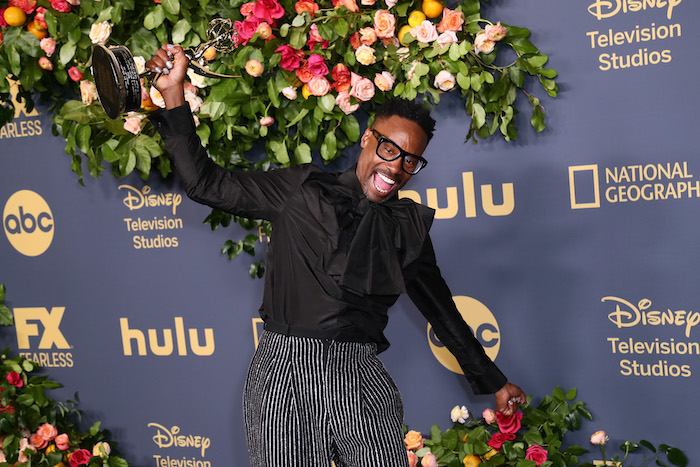 Billy Porter is great, and with his Emmy win on Sunday, he’s just one award away from the EGOT club, a rarefied honor indeed.

Yes, friends, all Billy Porter needs is to win one measly Academy Award and he will be able to count himself amongst the ranks of Rita Moreno, Helen Hayes, Audrey Hepburn, Whoopi Goldberg, and other people you probably have no idea who they are, because they’re not actors. It doesn’t matter though; they have the hardware to back it up. You can’t take an EGOT away from someone once they have it. It’s like the all you can eat for life pass at Olive Garden. It’s theirs forever.

Obviously I want Billy Porter to get an EGOT if only so he keeps walking the red carpet for a long time to come. (Pretty sure Glenn Close agrees with me on this one.)

Also, he is very talented, so that’s just icing on the EGOT cake, really.

So, since I am nothing if not a helper, and I’m sure Porter’s camp is already strategizing, I thought I’d put together a handy dandy guide for the easiest way to obtain an EGOT, because I am impatient and I figure most others are, too.

Obviously the first choice is to buy an Academy Award from eBay. As far as I’m concerned, an EGOT is not that you won each award, but that you have them. Unfortunately, The Academy is pretty strict about selling off a statue—you can basically only buy the ones awarded pre-1950 (which was when the Academy instituted a rule that if you were going to sell your award, you had to give the Academy the first bite at the apple for $1 to buy the statue back.)

Usually, you buy these things at auctions, like Michael Jackson did for the Gone with the Wind Best Picture award, which cost him well over a million dollars. But honestly, setting up an eBay alert is free, so why not? It doesn’t hurt, does it?

Yes, I know Mr. Porter is an actor first and foremost, but his red carpet looks are stunning, so why not go all in and do costume design for a movie that is Oscar bait? The Academy loves self-referential things, so if he’s looking for his next project I’d suggest looking for scripts about a man in Hollywood trying to get an EGOT so he turns to costume design after eBay doesn’t work out. Extra points if you can cast either Emma Stone or Amy Adams in this movie, as the Academy loves those two, as well. (Well, Stone more than Adams….) If his team really wants to go for broke, get Christian Bale to either gain a lot of weight, or lose a lot of weight for a part in it, and they’re all basically golden on this one.

OK, this is a stretch, but apparently, getting a cinematography nomination is the easiest nomination to score (you only needed 36 votes for one, in 2012) so why not play the odds, here? Acting is one of the hardest nominations to get for an Academy Award. Now, I’m not saying Billy Porter can’t do that, I’m absolutely sure he can (and will). I’m just saying this is about a quick win (the EGOT club comes with discounts at major retailers, right?) so why not go for the category with less competition?

This is just an insurance policy, but obviously going forward any song Billy Porter sings in any movie needs to have a songwriting credit that he shares. You never know if you’re going to luck into the next “Let It Go” so why not go for a passive Oscar win that way? Hell, if Melissa Etheridge or Eminem can do it, so can Billy Porter!

There you have it, a few easy paths forward for Billy Porter to win his EGOT. Personally, if I were on his team, I would really advise him to combine all of these ideas and go for broke in one mega-project because why not?

If his camp decides not to go this route, I respect that, but I would like to offer a pro-tip to them if you’re all-in on getting the award in the Acting category: Do not sit on Con Air 2 when it finally gets greenlit. That movie is going to be an international blockbuster, and very well could generate the award you’re looking for. Trust me on this one.