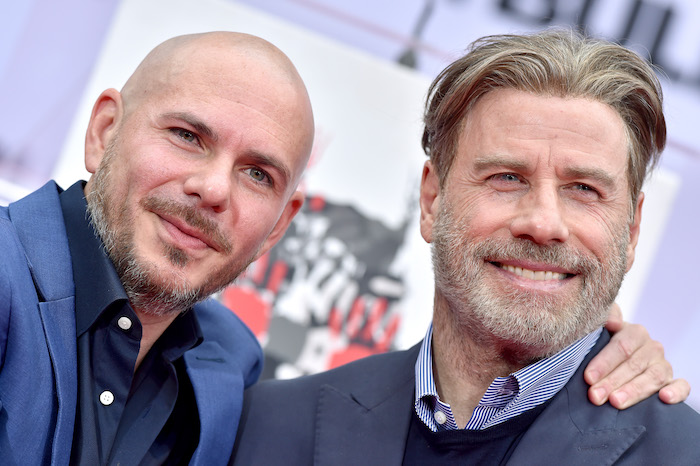 Have You Ever Mistaken John Travolta for Pitbull? Would You Like to?

There are few universal truths out there, but one is that everyone knows Pitbull and John Travolta have more in common than not. They are well known as true-blue buds, and it’s not an opposites attract kind of thing. No, those dudes are two peas in a pod.

As you also know, everyone holds a list of the qualities that they believe the two men, one, Mr. Saturday Night Fever, and the other, Mr. Worldwide, have in common—but that is a secret, personal list that should never be shared unless you want to bring on the apocalypse. This is why we’ve never really talked about Pitbull and John Travolta together on Pajiba before. It was out of professional responsibility.

However, People.com’s front page is about people I have no idea who they are, or stories that frankly bum me out, so we’re throwing caution to the wind today to finally discuss the two men! What a Monday, am I right!?

Anyway, it seems the bros are in on the whole thing, because Pitbull pulled an old switcheroo in his latest music video:

Now, look, before we go any further, I agree with you. “3 to Tango” is no “Ocean to Ocean” but look, we can only be graced with a Pitbull-penned song about an ocean-traversing merperson every so often. We’re just not that lucky to have gotten another one, yet.

I know you watched the video; don’t lie to me. For those of you who want to keep the charade up that you didn’t, I’ll explain what happens in it.

Pretty ladies dance for Pitbull while music plays, only twist! The man we thought was Pitbull was John Travolta all along! Then he smiles and the music video is over. (I guess I forgot to put in spoiler tags for a music video. Apologies to all you Pitbull purists who are also Pitbull ambivalents. It’s hard to toe that line as non-fans and I let you down.)

So, yeah. They got us good in that one. I know when I re-watch Grease, I ask myself “Is that Pitbull or John Travolta, now? It’s hard to tell them apart!” It’s even harder now that Pitbull has seemingly gotten Travolta to embrace a bald look, which honestly? Is working. There’s no stopping them now! Only… they seem in on the joke, so that means the joke is over, people. Oh well, it was good while it lasted. We’re going to have to find other things to talk about when we talk about Pitbull and John Travolta. Like, maybe their thoughts on the Lost finale? I don’t know. This is a new turn of events, I have to spend more time thinking about the future of those two in my conversations.

That’s all I have on this particular subject matter. We can stop, now.