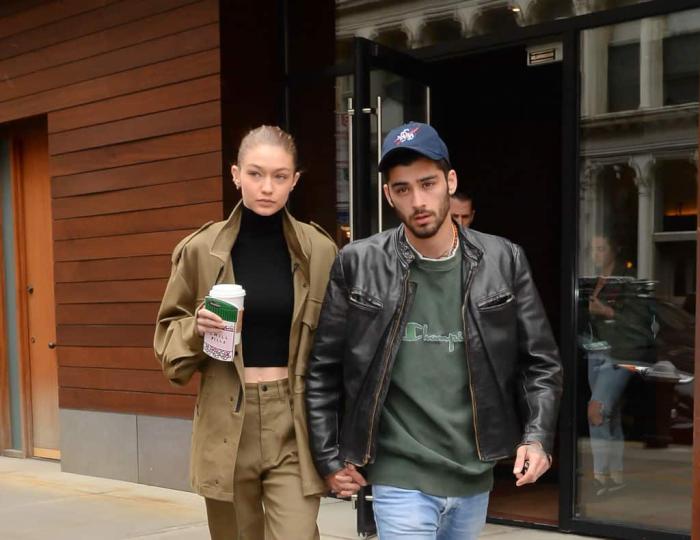 From Gigi and Zayn to Grimes and Elon Musk: A Brief List of Celebrity Lockdown Babies

Babies! Aren’t they cute? Isn’t there something beautiful, terrifying, and just a wee bit gross about creating a whole human being, pushing them out into this world, then having to raise them into a responsible member of society? Better you than me, OK? I’ve never wanted kids, but as a full-time pop-culture hot takes merchant, I can’t help but notice that during this weird year of lockdown madness, a lot of very famous people have been announcing their pregnancies. Hey, we’ve all got to keep busy during quarantine, I suppose. Really, it’s been one of the busiest periods for celeb pregnancies for quite a while. When I think about it, it might be the biggest and most high-profile era of 2005. That was the year when Violet Affleck, Shiloh Jolie-Pitt, Suri Cruise, and Sean Preston Federline were all born, and the 24-hour gossip/news cycle became utterly obsessed with all of these famous offspring. This is definitely a topic that could be mined for further analysis in the future, but for now, let’s take a look at some of the major pregnancy and baby news of the Great Plague Lockdown of 2020.

In May, musician Grimes and full-time Twitter troll Elon Musk introduced baby X Æ A-12 into the world, and yes, that is his legal name. No word on whether this child shall become the first human on Pluto or if he shall bring about the apocalypse. Sadly, he hasn’t been able to keep his dad off social media.

The coolest of the Jonas Brothers couples, Sansa Stark and the DNCE guy welcomed their daughter, Willa, in July 2020. They’ve yet to release any images or official updates on the kid, but you can still trawl Joe’s Instagram page for plenty of updates on his Quibi show!

Minaj announced her pregnancy in July in typically dramatic fashion, with a photo shoot that’s a glorious cross between Rainbow Brite and Moulin Rouge dancer. She got married last year to Kenneth Petty, a childhood friend who registered as a sex offender in California in 2020, having been convicted of attempted rape in the first degree in 1995.

Hedlund and Roberts started dating in March 2019 and the pregnancy was announced in August 2020, with Roberts revealing that they are expecting a boy. Her pregnancy fashion is sharp.

Our girl joined us earth-side this weekend and she’s already changed our world. So in love🥺💕

One of the most ridiculously photogenic couples out there welcomed their daughter onto the earth this month. No name has been revealed but Zayn will probably get it tattooed on his body somewhere, so keep your eyes peeled.

It’s been an… interesting year for Lea Michele. In-between, well, everything else, she gave birth to a little boy named Ever on August 20.

Posted @withregram • @unicef Welcome to the world, Daisy Dove Bloom! We are honoured to introduce Goodwill Ambassadors @KatyPerry and @OrlandoBloom’s new bundle of joy.⠀ ⠀ “We are floating with love and wonder from the safe and healthy arrival of our daughter,” Katy and Orlando told us.⠀ ⠀ “But we know we’re the lucky ones and not everyone can have a birthing experience as peaceful as ours was. Communities around the world are still experiencing a shortage of healthcare workers and every eleven seconds a pregnant woman or newborn dies, mostly from preventable causes. Since COVID-19 many more newborn lives are at risk because of the increased lack of access to water, soap, vaccines and medicines that prevent diseases. As parents to a newborn, this breaks our hearts, as we empathize with struggling parents now more than ever.⠀ ⠀ “As UNICEF Goodwill Ambassadors, we know UNICEF is there, on the ground, doing whatever it takes to make sure every expecting mother has access to a trained health worker and access to quality healthcare. In celebration of the heart we know our daughter already has, we have set up a donation page to celebrate DDB’s arrival. By supporting them, you are supporting a safe start to life and reimagining a healthier world for every child. We hope your ♥️ can bloom with generosity.⠀ ⠀ Gratefully-⠀ ⠀ Katy & Orlando.”⠀ ⠀ Please tap the link in our bio to support the most precious gift: a healthy child.

Daisy Bloom was introduced to the world on August 27 via a Unicef Instagram post (both Bloom and Perry are Goodwill Ambassadors for them.) Daisy also has the luck of being named after/inspired by a single on her mum’s new album, Smile.

On weekends we freak out! Before I’m able to start feeling the kicks, the anxiety gets the best of me and any little bits of spotting or pain freak me ouuuuuut. one day I swear I’ll buy one of these machines but by then I’ll be all done with having monsters! But as my little Luna embarks on her very first sleepover tonight, another little one makes some big growth moves of their own. all is well. @Drthaisaliabadi @drsteverad 💕💕

Befitting of a musical icon, John Legend revealed the impending birth of their third child via a music video. Teigen, who has been candid about her struggles with conceiving naturally, admitted that she was surprised to discover she was pregnant, especially since she’d just gotten her breast implants removed and the test she took before that surgery was negative.

Ello! A quick message from me as I have some personal news that I wanted to share with you… Last week, with the help of an amazing delivery team, Cherry gave birth to our beautiful and healthy daughter - Lyra Antarctica Seaborn Sheeran. We are completely in love with her. Both mum and baby are doing amazing and we are on cloud nine over here. We hope that you can respect our privacy at this time. Lots of love and I’ll see you when it’s time to come back, Ed x

Singer Ed Sheeran revealed that his wife Cherry Seaborn had given birth to their daughter at the end of August. I am all in on her name. Bring back quirky celebrity baby names! I mean, not baby Musk level weird but something a bit spicy, you know?

Congratulations to Leighton Meester and Adam Brody who welcomed a baby boy! 💙🍼

Meester and Brody are a mid-to-late 2000s nostalgia dream-couple. After a decade together, the pair have two kids, with their son arriving very recently. Their daughter, Arlo, was born in 2015.

The You star has been married to singer and doula Domino Kirke for three years. They welcomed the arrival of their baby boy this year. The pair have been candid about dealing with two miscarriages in the past, and Kirke’s work as a doula is well-documented online. She’s kind of badass. And yes, they did post a picture of placenta art. Like I said: Badass.

Apparently Rooney and Joaquin are parents now!!!!👶🏻🍼🎉🎊✨🎇🎆💌😊❤😊 After seeing @rooney.mara 's post announcing these beautiful news, I just couldn't help but join the celebration!🧁🍭🍬🎂🌅 I'm so happy for this wonderful family! 💓 Congratulations! 💟 They deserve all the happiness in the world! 💐🙏🏻 Rooney and Joaquin are going to be the best parents and the baby will grow up to be the most gorgeous stylish vegan human being, just you wait! ❤🌼🌸💐🌳🌿🍃😊❤😊 Photo credits: Alberto Pizzoli, Cannes Film Festival, 2017 🌸 #rooneymara #joaquinphoenix #baby #newborn #love #congratulations #newborn #child #family #parents #vegan #style #fashion #cannes #roonix #joker #carol #thegirlwiththedragontattoo #rooney #mara #father #mother #dad #mum #rooneymaracloset ♡

So, neither Phoenix nor Mara’s camps officially announced her pregnancy, but her growing baby bump pretty much confirmed it. Now, she’s just been photographed without said bump, so congratulations! It’s doubtful the notoriously private couple will release any details, but I hope the baby has a very cool name befitting the Phoenix tradition and is coolly unapproachable in a vaguely intimidating manner.