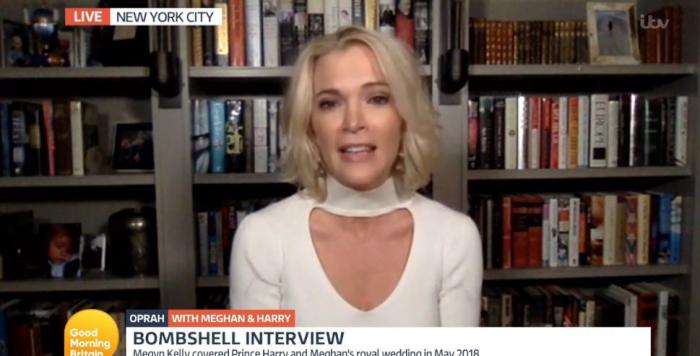 I can’t stress how much I appreciate Kayleigh (and Patrick Adams from Suits) staying on top of the Meghan Markle/Prince Harry business. It is decidedly outside of my wheelhouse, but culturally speaking, it’s important to understand, if only for the way that the Royal Family and the establishment media cling so desperately to narratives that enable systemic racism to thrive both in the UK and here.

To wit: Last night after the interview aired, Megyn Kelly — who lost her very high-paid job with NBC News for defending blackface — questioned the way that Oprah Winfrey, an American icon, conducted the interview.

Oprah stayed too broad-I wanted more: “who?…Be specific…what exactly did they say? Who was jealous of M after Australia? How did u know that? What do you mean ur family hasn’t “educated themselves” the way u have? They’re racists? WHO?” Eventually they’d have to get specific.

There is not a GIF that offers a strong enough reaction to that malarkey. In any respect, Megyn Kelly appeared on the morning show of that vile little man Piers Morgan today to continue offering her opinion, because that’s exactly what no one asked for. It sounds exactly like the commentary one might expect from a person who defends blackface.

‘She’s painting herself in adorations while she was making complaints that will be totally unreliable to 99% of people.’

US broadcaster @megynkelly says Meghan’s Oprah interview was full of contradictions and she was ‘completely unaware’ of how she sounded in the interview. pic.twitter.com/qJZB6xsz4W

Megyn Kelly has the audacity to accuse Meghan Markle of not being self-aware and then proceeds to critique Oprah’s interviewing skills.

Mind you this lady was so out of touch with reality, problematic, and bad at interviews they paid her $30 million to fire her.

On the other hand, Piers Morgan also asked Dr. Shola Mos-Shogbamimu to appear on the show. He probably wishes he had not. “Are you out of your godforsaken mind?!”

Please take two minutes and watch Piers Morgan get absolutely stuffed into a locker while taking up for racism in the Royal family… https://t.co/ICPr60pGMp

When an older Black woman says "listen, you might learn something" that's when you know your speaking part in the conversation is over.