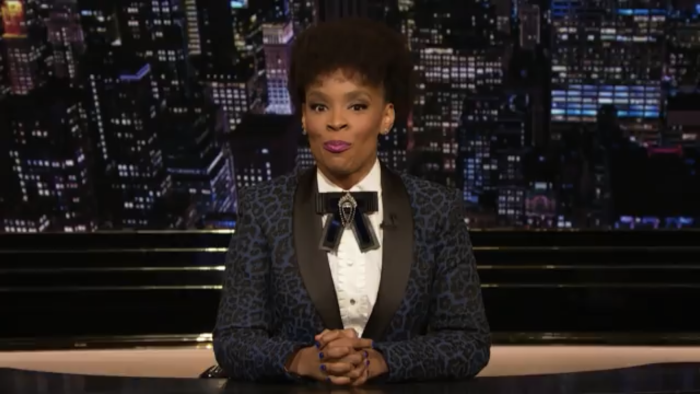 It’s good to just be silly sometimes. A lot of comedy from late-night shows is sourced from current events, which is great, but sometimes you just wanted somethin’ that’s friggin’ silly. A sketch or segment that’s all about the moment at hand. That’s what the Amber Ruffin Show seemed to be going for with their latest, hilarious bit about “Broadway Jack.”

First and foremost, a wonderful cherry on top of this bit is the use of comedian and actor Jeff Wright. Jeff appears on Amber’s and Seth Meyers’s shows and is a pure delight whenever he does. He also has one of the funniest twitter pages going right now. For example:

I promise I can keep a secret pic.twitter.com/rkWNZTPHmJ

On the show, Jeff emerged with exciting news: Broadway Jack was on his way! From there on out the bit became an onslaught of side-splitting one-liners delivered by Wright, Amber herself, and the always trusty Tarik. All three of them are having so much fun that you get wrapped up in the joy and excitement with them!

I won’t spoil the big reveal, but I will say that you do, eventually, learn who Broadway Jack is and it brought the sketch home in a very satisfying way. The whole bit was just pure, funny silliness and I’m incredibly grateful for it. The Amber Ruffin Show continues to knock it out of the park and I’m loving every silly swing.


← Dr. Shola Mos-Shogbamimu and Megyn Kelly Offer Contrasting Opinions on the Harry and Meghan Interview | Let's Hope Alan Kim's Tearful Critics Choice Awards Speech is Not the Last We See of Him →