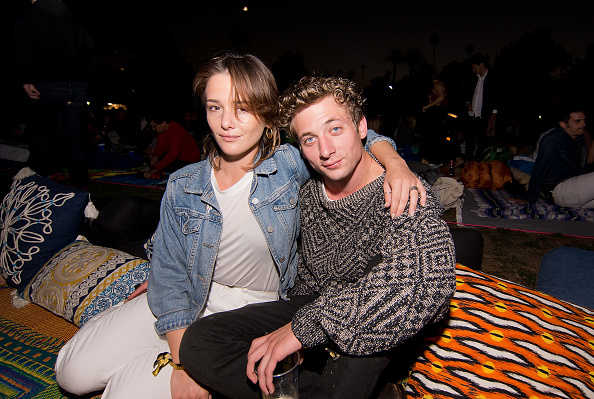 Jeremy Allen White — better known around these parts as Lip from Shameless — married his longtime girlfriend, Addison Timlin, last week. The two have a one-year-old child together. Timlin is an actress who has appeared in Californiacation and as the female lead in CBS’s MacGyver pilot, although she was recast when the series was picked up (sorry, that was an unexpected bummer).

The two married at a Beverly Hills Courthouse last week, which is a very Lip thing to do. They’re were accompanied by Coldplay frontman Chris Martin and his girlfriend, Dakota Johnson, which couldn’t be any less Lip. In fact, Lip would kick Jeremy Allen White’s ass for that. We’re happy for them, all the same, even if these matching jackets are a lot. Adorable couples do strange things when they’re in love. But also, look at White’s dopey, I’m-in-love grin! Awwww.

Jeremy Allen White and Addison Timlin are both 28 years old, which is two years older than Laura Savoie, a 26-year-old Ph.D. student who is now engaged to Dennis Quaid, who is 65 and looking every bit his age (no offense) in the awful third season of Amazon’s Goliath. “She was actually taking a selfie of us,” Quaid told People, “and I put the ring in front and said, ‘Will you marry me?’ And then she fell down.”

Interestingly, 21 years ago, Quaid played a character in The Parent Trap who was engaged to a 26-year-old woman who was only going to marry him for his money. Quaid was 44 years old at the time, and the fact that he was marrying a 26-year-old in a movie was played for laughs. Now he’s 65, and Elaine Hendrix — who played his fiancee in The Parent Trap — shared her own LOLs on Twitter.

Watch out for those twins. 👯‍♀️ https://t.co/Rloat1gLCy

Good for them, though. I guess.

← 'The Walking Dead' Season 10, Episode 2 Recap: 'Ghosts' | Miley Cyrus Catches Flak For Suggesting Being Gay Is a Choice One Makes After Exhausting All the Good Dick →