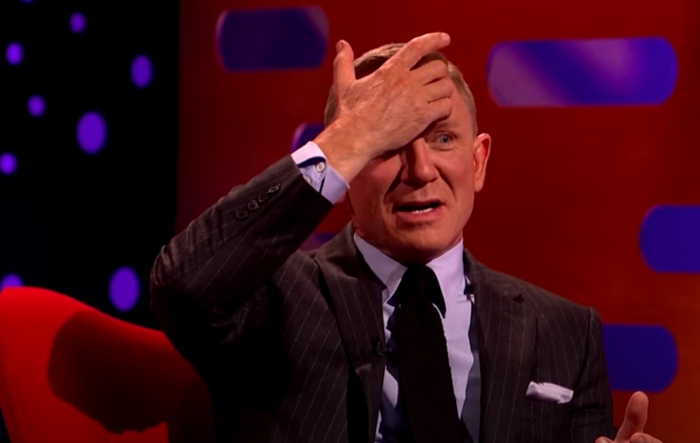 Daniel Craig Broke Dave Bautista's Nose, But There's a Disagreement About What Happened Next

No Time to Die hits theaters a week from Friday (and tomorrow in the UK), so after several delays, promotion of the film is finally in full force (and reviews, so far, have been largely positive). The film couldn’t come soon enough, as the Bond film, Venom: Let There Be Carnage, and Dune are expected to carry the box-office through another pandemic-plagued fall.

Earlier this week, some of the cast of No Time To Die appeared on The Graham Norton Show and Norton asked Craig what his worst injury has been on all of the Bond films. It wasn’t the broken ankle he suffered on this film (when he merely tripped and fell), but when he apparently dislocated his knee in a fight with Dave Bautista. The knee injury set production back, but when Craig returned to the same fight sequence — which had been rehearsed for weeks and weeks — he inadvertently punched Bautista in the face and broke his nose. “I heard this crack, and went OH GOD NO, and ran away,” Craig said, adding that Bautista was very sweet about it and popped his nose back in place.

That was on Spectre, although it’s not exactly how Bautista remembers it. As he stated on Twitter, Craig did not run away to Bautista’s recollection.

He did not run!!!😂 He started screaming “Fuck I broke his nose!!”😂 And he did. And then he hugged me,apologized,we laughed, I changed clothes, shoved TP up my nose and we continued to make one of the best fight scenes ever. Very proud of it. And I love me some DC❤️ #DreamChaser https://t.co/hRCsEmJden

I’m sure that Craig — after accidentally breaking the nose of a professional wrestler — felt like running away, and so his faulty recollection is understandable. Either way, I think we can all agree with Craig’s other recollection about Bautista. “He’s a lot tougher than I am. I’ll give him that.”


← Britney Spears' Lawyer Says Her Dad Is a Drunk Gambling Addict | 'Foundation' On Apple TV+, 'Midnight Mass' On Netflix, And More On Podjiba! →