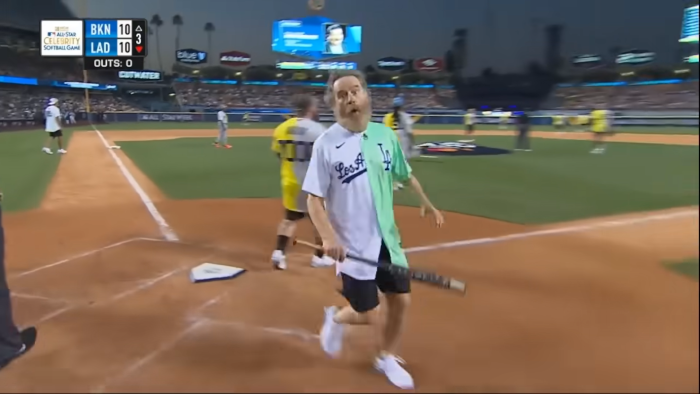 Bryan Cranston’s days as Walter White may be over (or maybe not), but his time menacing authority figures is just getting started. Tonight is the Home Run Derby, and tomorrow the All-Star Game. They’re two annual events for Major League Baseball to be held at Dodger Stadium in Los Angeles. But first, the stadium was home to a celebrity softball game. People like Jojo Siwa, Desus and Mero, and The Miz played in the game. Cranston managed to make the biggest impact.

It’s important to note that Cranston’s mere appearance at the game made waves from the jump. It wasn’t just that he was playing in the game. Nothing is at stake, it’s just for fun. No, it was his literal appearance that got everybody talking. Take a look for yourself.

Look at him! Look into those crazy eyes! This is the hair and stare of someone who just ate your whole family and is coming back for seconds. This level of intimidation almost feels criminal! Then things got worse.

Look, nobody likes MLB Umpires. They’re wrong constantly and get downright indignant if they are called out. I have been patiently and anxiously awaiting the day that Major League Baseball starts using AI Umps. Until that day, we have to put up with them. Yes, they make mistakes, but they are human beings. A fact that Bryan Cranston disregarded at one point during the game!

When Bryan was up to bat, he took a pitch looking (he didn’t swing). It was a ball, and yet the Ump called it a strike, sending Cranston to the dugout. The Malcolm In The Middle star was none-too-pleased and proceeded to kick dirt at the umpire. He only stopped when fellow dramatic powerhouse JK Simmons intervened!

Bryan Cranston kicks dirt on the umpire after he calls a ball a strike 🤣🤣🤣🤣@UmpJob pic.twitter.com/UKv3rrLYVF

He wasn’t done there! Cranston then came back onto the field and hurled a bucket of Bazooka Joe at the Umpire!

HE ACTUALLY THREW THE BUCKET OF GUM AT THE UMPIRE I’M CRYING pic.twitter.com/Ju2g9UGdI1

Is nothing sacred?! Do the words Celebrity Softball mean nothing anymore?!