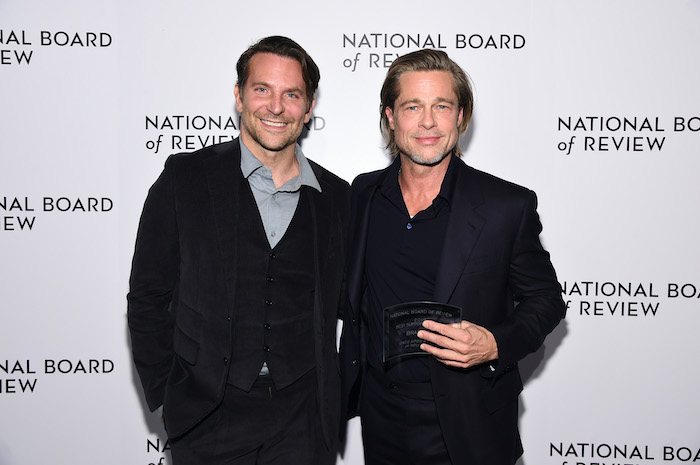 Friends, it is my firm belief that all famous people know each other, and the fact that Brad Pitt is crediting Bradley Cooper for helping him with his sobriety is not dissuading me of this notion. Those two generically handsome dudes have never worked on a movie, tv, or music video for Sisqo’s long-awaited (by me) return, so…they must have met at some super-secret society for famous people, yeah? (…and yes. I know that’s called the Oscars. Duh.) I mean, it just occurred to me that those two are basically the only famous “Brads” in Hollywood, so maybe they bonded over the fact that Brad Dourif blew them both off, once? I dunno! Anything is possible, this is Hollywood, baby!

Anyway, Pitt gave props to Cooper’s role in his sobriety last night when he was won Best Supporting actor for Once Upon a Time in Hollywood at the National Board of Review Annual Awards Gala. I’ll let People.com tell you what he said because if I didn’t this would be a very dumb, pointless, and yes, short post.

“Bradley just put his daughter to bed and rushed over here to do this,” Pitt said at the beginning of his speech of Cooper’s 2-year-old daughter Lea De Seine. “He’s a sweetheart. I got sober because of this guy and every day has been happier ever since.”

According to the article, Pitt has been sober since 2017, and Cooper has been sober for well over 10 years (since his late 20’s) so good for them! Booze is ingrained in many aspects of socialization as an adult, so being able to walk away from that is impressive.

Now, look, those of you who read B. Coop coverage at Pajiba know that anything related to him is almost always related to mole people, who live in their own below-ground underworld, and who are clearly planning to overtake our top-side world one day and rule above ground, to the ruination of us all. Almost all Bradley Cooper news is intrinsically related to them and the Illuminati conspiracy to keep the top-side world in the dark of the imminent threat mole people have over humanity. However…this is the rare (VERY rare) Bradley Cooper story where what you see is what you get. Just two bros, appreciative of each other and their sobriety. Which is sweet, if you think about. So, no mole people here today friend, just one better-than-average looking dude celebrating his sobriety, which is something to celebrate.

← Every Piece Of Good News We Could Find Out In The World For #ThankfulThursday | Cheers to AOC, Our Future President 🔥 →