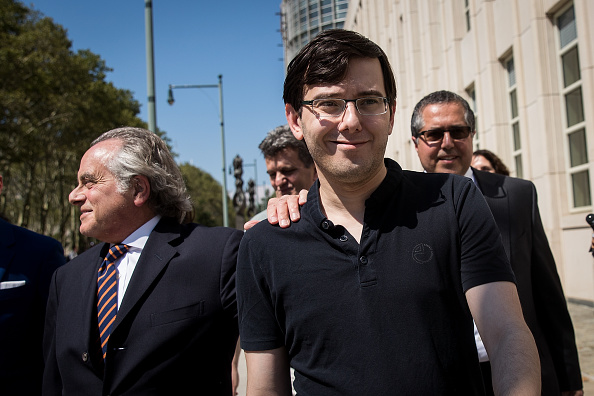 If you haven’t read the Elle story on Christie Smythe, the Bloomberg journalist who quit her job and left her husband after falling in love with Pharma Bro, Martin Shkreli, it is every bit as wild as your social media feeds suggest it is. She was a court reporter for Bloomberg who said she was living a comfortable life with her husband before she fell in love with someone she was covering and not just anyone, but Martin Shkreli, the villainous pharmaceutical executive notorious for not only engaging in price gouging but bragging about it. He was the guy who also spent $2 million for a one-off Wu-Tang Clan album.

Everyone on both sides of the political spectrum believed Shkreli to be horrible. It’s as close to a bipartisan consensus we may ever get. But not Christie Smythe, who allowed herself to be manipulated by Shkreli — who fed her off-the-record information for months while teasing her with the promise of an on-the-record interview — until she eventually developed a crush on him. The more she continued to cover him — and the more she became familiar with his life and his friends — the more she began to sympathize with him. She insists that he trolls to “masks his anxiousness,” and that he didn’t actually raise prices on EpiPens by 5,000 percent, and that he’s just a really ambitious man with a great smile.

It was not until he was in prison, however, before the two kissed chastely (they never had sex) and told each other they loved each other, which ultimately led to her decision to resign from her job at Bloomberg (for obvious reasons) and divorce her husband. However, Shkreli stopped communicating with Smythe after he found out about the Elle article, relaying to Smythe through the author of the Elle piece only that “Mr. Shkreli wishes Ms. Smythe the best of luck in her future endeavors.”

If you think you’ve made poor life decisions, there’s a woman who left her husband and ruined her career for Martin Shkreli.

I realize it's hard for many people to accept that 1. Martin is not a psychopath, and 2. a woman can choose to do something with her life (which does not affect you) that you in no way approve of. But that's OK.

imagine upending your entire life for a mr. martin shkreli only to be broken up with through a comment he gave to a journalist wishing you well on your future endeavors while he is ghosting you from JAIL!

The days of ending emails with "Best" or "Regards" is over. From now on it's, "Mr. Shkreli wishes Ms. Smythe the best of luck in her future endeavors"

There is a lot of subtext, however, that’s hinted at in the piece, and suggested even moreso by tweets like this:

Thank you again to @ELLEmagazine for letting me tell my crazy tale. It takes bravery, too, to publish it. It still amazes me HOW HARD it is to get a story as messy and complicated as this to see the light of day. But it's out now. At least that's done.

As mentioned in the article, Smythe has been shopping a book about Shkreli for a long time, and while she was able to option away movie rights to her book proposal, she still hasn’t been able to sell the book. This piece — and the obvious attention it attracted — could very well help her do so.

The other point is this:

That Elle Story reminds me of a column I read ages ago that I think about a lot: the writer posited that the reason humans develop intense, irrational, obsessive crushes isn’t to get us into relationships — it’s to get us *out of* relationships

Smythe wasn’t really living the “perfect little Brooklyn life.” She wasn’t really “happy” in her marriage — she showed up to her one-hour marriage counseling session 52-minutes late. She didn’t seem to be that committed to her job, either. Not long before all of this went down, Smythe had taken a leave of absence for the Knight-Bagehot Journalism Fellowship at Columbia University.

She wanted to write a book. She was in a bad marriage. Martin Shkreli gave her an out and an opportunity to sell that book proposal. I bet it works, too. After all, the Internet is already casting the movie.

And before anyone even thinks about feeling sorry for Smythe, remind yourself of this: She was married to an investment banker, worked for Bloomberg, lived comfortably in Brooklyn, and is the kind of person who could fall in love with one of the most reviled men in America. Rich people, y’all, just blow up their lives differently than the rest of us.