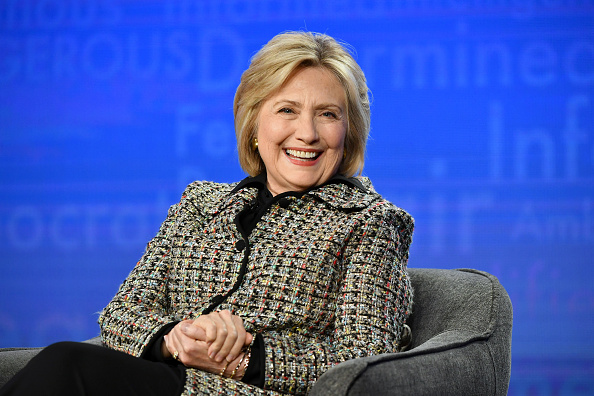 I mostly gave up on reading political memoirs a while ago because even the best of them are facile and chock-full of platitudes. They exist to solidify legacies, and as someone who loves smutty, behind-the-scenes gossip, they’re too often lacking (unless it’s a memoir about the Trump presidency, and after the second or third one, those became achingly predictable and repetitive).

I don’t know exactly what possessed me to pick up Hillary Clinton’s State of Terror (co-written with Louise Penny, the Canadian author best known for her Armand Gamache mysteries). Espionage thrillers aren’t really my thing, and I’d rather pull my eyeballs out through my nose than read one of Bill Clinton’s potboilers co-written with James Patterson. But in State of Terror, the main character, Ellen Adams, is a Secretary of State, and at the very least, I imagined that Hillary Clinton might have some insight into the position.

What I didn’t expect, however, was a thriller with characters who were so thinly veiled. Ellen Adams is the Secretary of State to the newly elected Douglas Williams, her biggest political rival who chose her as Secretary of State as a way to keep his enemies close. There is no love lost between the two. If that doesn’t sound familiar, the Williams Administration is taking over after President Eric Dunn (also known as Eric the Dumb) ran the country into the ground and soured America’s relationship with every other country on the planet.

Though any similarities between the fictional characters and real ones are, uh, purely coincidental, there’s also a Mike Flynn-like character, a James Mattis, a Huma Abedin, a Vladimir Putin, and even a Sean Spicer, a character named Pete Hamilton who is described as a doughy, baby-faced former Press Secretary to Eric Dunn. Though there isn’t a lot of insight into the Secretary of State’s relationship with the President (it starts chilly, but they gradually come to respect one another), Hillary Clinton seems to delight in insulting her Eric Dunn character’s intelligence.

As for the novel itself, it’s decent! After bombs go off on buses in three European cities, Ellen Adams — who ran a media empire that she completely severed ties with when she took office (handing control over to her daughter, Chelsea Katherine) — is tasked with finding the people responsible for the bombings and preventing them from setting off a nuclear attack in the United States.

I don’t want to give too much away, except to say that it involves a “vast right-wing conspiracy” using Eric Dunn as its puppet that wants to reinstall him as President using a coup so that they can return America to the way it was meant to be. Read: White. A cartoonish Iranian arms dealer is also involved, although tracking him down requires that Ellen Adams forge cordial relationships with leaders in Iran and Pakistan. Ellen Adams’ son, meanwhile, is a reporter for Reuters. She’s also widowed, which saves us from any potential Bill Clinton stand-ins. Oh, and the Russian mob is involved, too. Naturally.

It is not, however, a wonky novel about foreign relations disguised as a thriller. It’s like a season of 24 crossed with Madame Secretary, and while there are a few actions sequences, most of the sparring is verbal. It’s not a terrifically written book, either; there are some clunky metaphors and more than a few tin-eared passages. And yet, it’s also a surprisingly entertaining page-turner, which is not what I expected, exactly. Nor did I expect the middle-aged protagonist to use as much profanity as she did, or to talk about the feelings some men stirred in her nether regions (*gasp*!). Mostly, though, I enjoyed gleaning Hillary Clinton’s insights into various regions of the world, her animosity toward the Trump Dunn Administration, the warm friendship between Adams and her Chief of Staff, and a surprising deftness when it comes to the whodunnit mystery. I sought out the novel to satisfy my curiosity, but I was pleasantly surprised with how riveting State of Terror actually is.

← Katie Porter Visits 'The Daily Show' With Hopes Of Holding Big Companies Accountable | Review: 'The Souvenir Part II' is a Sharply Realized Portrait of an Artist as a Young Woman →