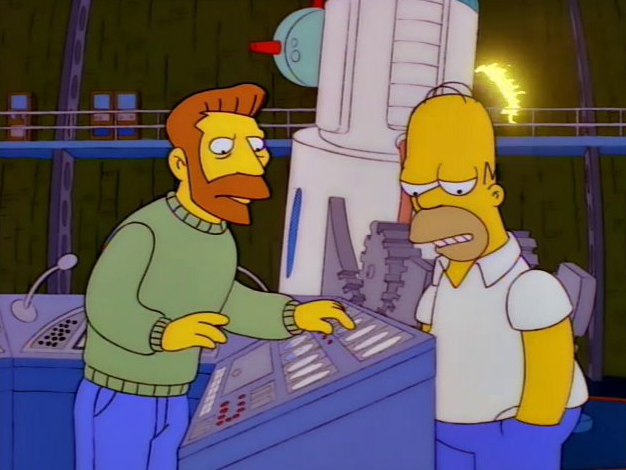 Twitter Users Ponder Their Favorite Sentences From the 'The Simpsons'

This has got to be the most I’ve laughed from a Twitter thread in a long, long time. I mean, it makes sense, seeing as it’s mining quite possibly the richest comedic vein of all time: the golden age of The Simpsons. No other pop culture property has done as much to shape the vocabulary and the language overall of multiple generations as Matt Groening’s late 20th-century creation. I go back and rewatch seasons 3-8 or so quite often, and it’s never less than absolutely mind-blowing to witness the run of quality that The Simpsons managed back then. You look at the episode listing of something like season 4 or 5 and it genuinely boggles the mind. So when you stumble on a Twitter prompt like this:

This is mine from “Itchy and Scratchy and Poochie” delivered by Not Bill Oakley pic.twitter.com/mALaTxpUxp


You know you’re in for a good time. The sheer volume of possible responses is almost paralyzing, although for me, this answer spoke deeply, as I’ve found myself saying this line in response to almost everything I didn’t fully understand at first over the last year or so:

There are better/smarter/funnier lines, but this just, for some reason lives in my head. pic.twitter.com/pouAS1FnQU

"Maybe Lisa’s right about America being the land of opportunity, and maybe Adil has a point about the machinery of capitalism being oiled with the blood of the workers"." pic.twitter.com/y8OCFfYhr9

i post this one all the time but pic.twitter.com/rtmXb9EL9p

She'll get in the hammock with ya! pic.twitter.com/t29ePiYDGk

“oh neddy, it was terrifying! i thought i was headed for the eternal bliss of paradise!” pic.twitter.com/JDrcThHzdR

Will never forget the way this line absolutely floored me the first time I heard it. Funny on a level that a ten-year old me could almost not comprehend. pic.twitter.com/2Bp3HJF0hk

Probably overused at this point but… pic.twitter.com/kjIHQuwAmU

any time I leave anything — work, social gathering, etc. — this line comes to mind and half the time I say it out loud pic.twitter.com/NkaMOt0hrh

Choosing one is difficult, but this ranks pretty high: pic.twitter.com/unRlTvopJ7

i'll be thinking about this all day but the first one that came to mind: "Want to change your name to Homer Junior? The kids can call you HoJu" pic.twitter.com/0hVtIw8mIr

I absolutely love this one, because it seems innocuous at first glance and only gets funnier the more you think about it. Tells you so much about how Mr Burns sees the world, too pic.twitter.com/8YGjiVJXQq

I work at a used bookstore so every time I pass Robert Frost I think of this. pic.twitter.com/iM7aSESUzE

Burns' retort is one for the ages pic.twitter.com/cbWHazMoI4

I know it's low-hanging fruit, but the delivery makes me laugh out loud EVERY SINGLE TIME. pic.twitter.com/dCP9qEnsz8

They say he carved it himself, from a BIGGER spoon! pic.twitter.com/eKIUh4eo4m

So many possibilities, but this one is definitely on my personal short list. pic.twitter.com/CTWx72srla

You there, fill it up with petroleum distillate and re-vulcanize my tires, post-haste! pic.twitter.com/Z8jxnsxOIa

"I'd like to send this letter to the Prussian consulate in Siam by aeromail. Am I too late for the 4:30 autogyro?" pic.twitter.com/uAi48IBySk

One I find as funny now as I did when I was a kid: pic.twitter.com/MQWCHx2dnn

I've said this pretty much every time I've seen a cow in the last 20 years. pic.twitter.com/MjOnZQMDy8