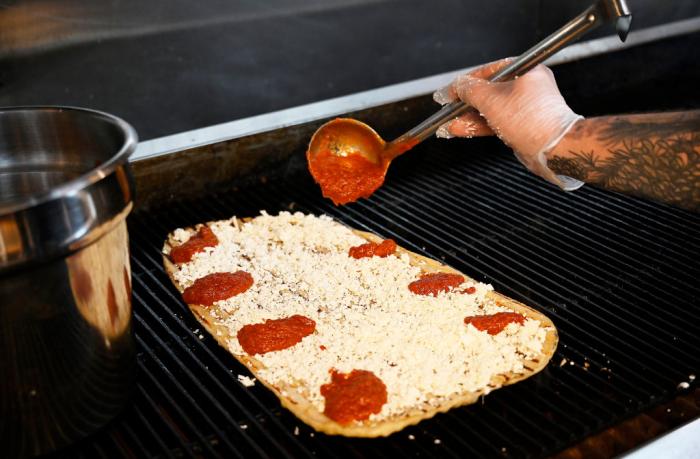 Look, I’m not one for food snobbery or prescriptivism. Food is functional. It keeps you alive and, ideally, healthy. If it tastes good to you on top of that, eat it how you want. Obviously, there’s some nuance here—specifically around the importance some foods have in certain cultures and the importance of respecting that—but by and large, my rule is: Do it how you want.

All that said, when it comes to pizza—the sublime and beautiful earthy creation that is pizza—I can’t help but wince when I see someone act out some weird fuc*ery on its hallowed surface.

I’m sorry. Each to their own and all that, and I’m happy that those poor Stockholm syndromed lot in there are ‘enjoying’ their war crime, but whoever pulls the strings in that establishment should be bundled into a van and hauled off to The Hague. Twitter, naturally, responded correctly to this sight:

I live close to Beto’s, and I promise you this, I stay far far away. I tried it once in 2015 and have been upset ever since.

I’ve been to other places that do a cold cheese pizza (most the time the hot pizza melts the cheese a bit anyway) but that’s a first for dumping cold, slimy mushrooms right out the can on it 😖 They’ve always been cheese only where I’ve had them.

“This pizzeria has ruined the best part of pizza, no one knows why, but it’s good actually!” Yeah fuckin right

I was wondering wether this was done out of sheer laziness, or some kind of cost saving measure, not actually finishing cooking the pizza. All that was knocked right it if my head when they said provolone. Who puts Provolone on pizza?That's as bad as the Altoona Kraft singles one

this box technique is a war crime pic.twitter.com/NRDYO5N6uF

there are No Good Betos


← Jimmy Fallon, Paris Hilton and NFTs Combine For A Nightmare Scenario | Review: 'Memoria' is a Languid Genre-Bending Drama that Invites the Audience to Embrace the Unknown →