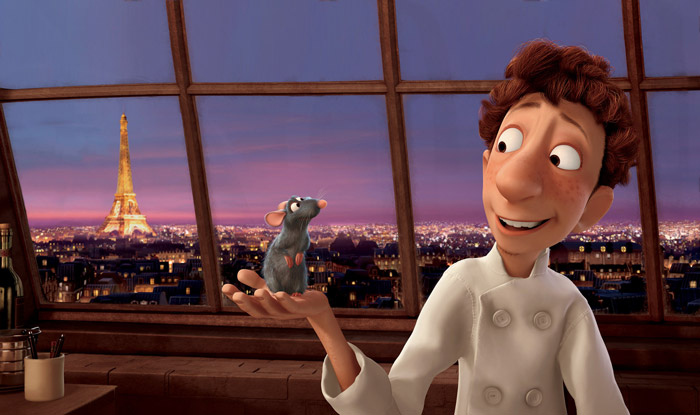 TikTok makes it easy for users to create and upload videos, which has sparked an array of enchanting memes, games, and challenges. The platform has also proved a place where artists can display their work, be it paintings, wood carving, or songwriting. Now, a pack of music lovers have joined forces for a sprawling collaboration, turning Pixar’s Ratatouille into a musical.

Directed by Brad Bird and Jan Pinkava, Ratatouille follows a French rat named Remy (Patton Oswalt), who dreams of being a chef. However, he faces two major obstacles. First off, his family doesn’t understand his dreams of culinary excellence, because they’re content to eat trash. Secondly, humans aren’t super thrilled about the idea of a rat cooking their meals. However, a fateful meeting with a clumsy kitchen worker named Linguini (Lou Romano), changes everything. Nested under Linguini’s chef’s hat, Remy tugs his hair to control his movements, using the man as a puppet. However, as the fame and acclaim all goes to the man, not the rat pulling the strings, tensions rise—even as Linguini falls in love with the fiery Colette (Janeane Garofalo)! Meanwhile, Remy must also avoid the jealous rival chef (Ian Holm) and a merciless food critic Anton Ego (Peter O’Toole).

Now that you know the context, enjoy a taste of this fan-made musical version of Ratatouille.

The New York Post reports it all began in August, when New Yorker Em Jaccs posted this vid to TikTok:

If you haven't gotten into the pure bliss that is RATATOUILLE THE MUSICAL, there's truly never been a better time! pic.twitter.com/CHhhEBZqBd

From there, other users took the idea and ran with it. Among them is Jeremy Crawford (@jeromejarambe), who created a song of Remy’s dilemma.

Does this website know that Tik Tokers are making Ratatouille into a musical? And it’s absolutely incredible? (Thread) pic.twitter.com/L1PPvi2WvT

Here is a delightful duet to capture the magic of Linguini and Remy’s blossoming bond. Music, lyrics and Remy performance by Olivia Barron (@localstupidlesbian), Linguni performance by Emma (@OtherHotEmma):

The TikTok platform has a “duet” function, which allows users to create videos like the one above. The first user offers a setup, in this case, a song and half the sung lyrics, with all of the words in captions. Then, anyone on the app can play Linguini to her Remy. In this way, TikTok’s proved an incredible platform for this collaboration.

To speak to the brewing sexual tension between Linguini and the hard-as-nails Collette, Apressley (@aaacacia_) and Blake Rouse (@blakeyrouse) joined forces on a tango:

TikTokers are creating a Ratatouille musical with no centralized organization. It is astoundingly good. pic.twitter.com/giTn7eozi6

the world is falling apart in 2020 and tik tok is over here making a Ratatouille Musical and honestly… Lin-Manuel Miranda could never pic.twitter.com/P8ilKYNNFR

The Act II finale is figured out, courtesy of Daniel J Mertzlufft (@danieljmertzlufft).

One tiktok user, a composer named Daniel, submitted what the community has accepted as the official theme of the Ratatouille musical. pic.twitter.com/a9bka12fON

Now imagine it with more people:

The sad part is I would go see Ratatouille the musical bc Act I Finale is already a banger i definitely cried when he raised the damn ladle 😖😒 pic.twitter.com/FeqrlwWjJP

Jack Cleary (@jackattackcleary80) offered thoughts on how critic Anton Ego should be properly captured in look and lyrics.

How about a song for Ego? Jared B. Goldsmith (@jaredbgoldsmith) has got one.

I would love to hear @RemyWrites ‘s take on the recent trend of Ratatouille the Musical on Tiktok. It is literally live rent free in my mind right now. pic.twitter.com/Oprph3sN7y

What about costumes? Maru (@Marumarkx) has ideas.

A finale verse for Collette was looped in with music by RJ Christian (@rjthecomposer), lyrics/performance by Momo (Momopeach02), and the proposed set design by Shoebox Musicals (@Shoeboxmusicals):

Even in these scrappy early stages, the would-be Ratatouille musical, unofficial as it may be, is spurring excitement from aspiring audience members.

the ratatouille musical currently being made by the tik tok community. https://t.co/JWgpcDpUad

Have you heard about the ratatouille musical or are you straight?

I swear, if someone doesn’t actually get the Ratatouille Musical onto Broadway when this shit is all over then literally what is the point of even reopening Broadway at all.