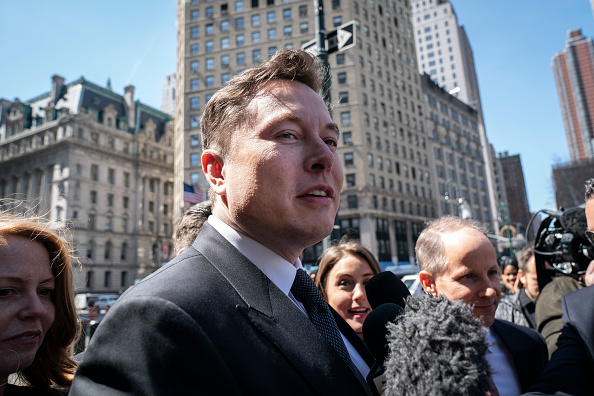 The Tables Have Turned: Twitter Has Elon Musk Over a Barrel

For the last week-and-a-half, Elon Musk has been balking on his planned takeover of Twitter. Obviously, it’s a bunch of hooey, but he’s claimed repeatedly that Twitter is overrun with bots presumably as a pretext to get out of the deal (or negotiate a lower price). The ironic twist, of course, is that Elon Musk’s original intention was to purchase Twitter so that he could … rid it of bots. Twitter has claimed, in public filings for eight years, that around 5 percent of its active users are bots. Elon Musk had every opportunity to hash that out with Twitter and factor it into his buying price before submitting his bid, but he was so excited about taking over the company and owning the libs that he passed on his due diligence.
Musk has taken to Twitter to press this issue several times in recent days. To wit: 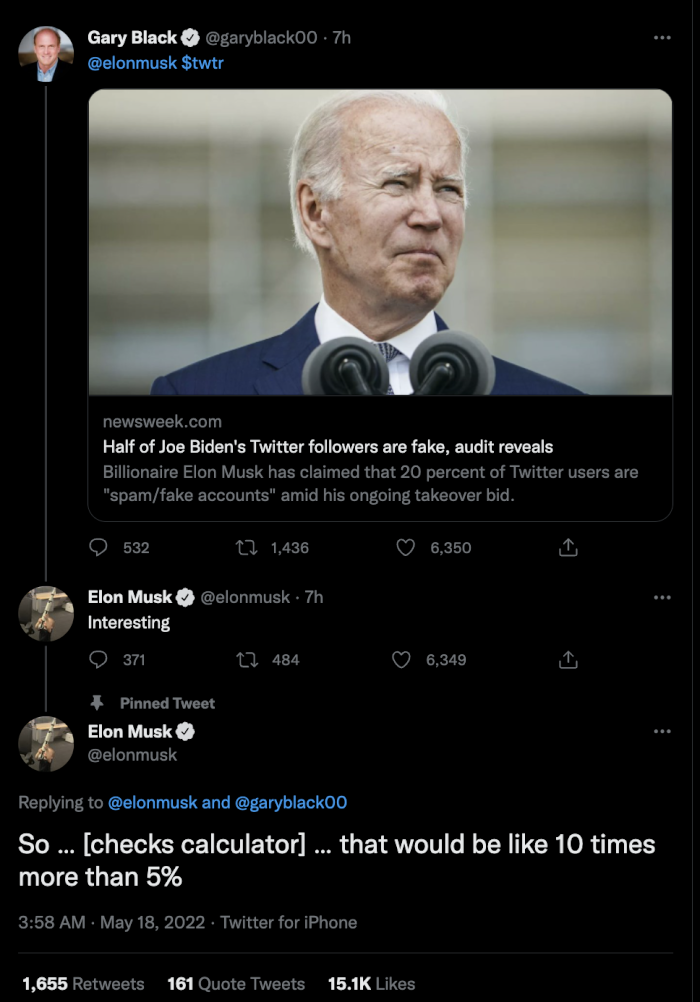 Musk surely knows — because he is presumably not an idiot — that accounts with large followings (like his own) will naturally have more fake followers (about 5.5 percent of Pajiba’s much smaller account, for instance, is made up of bots). Musk isn’t interested, however, in truth, reality, or facts: He’s mostly interested in either scuttling the deal or getting a better price for the social network.

BuT wHy? Since Elon Musk put his $54 per share bid in, the cryptocurrency market has gone into meltdown, Tesla’s stock has fallen 30 percent, and a lot of money that was previously available has dried up. That $54 per share price is looking like a really bad deal for Musk. Twitter’s stock is trading at $37.75 at the moment, while Bitcoin has lost well over half its value since last November, and the value of Dogecoin — the cryptocurrency that Musk had wanted Twitter users to utilize to make purchases on Twitter — has been all but wiped out.

That’s exactly why he may get stuck with the bag, which could be the end of Twitter as we know it. Twitter has always been a cesspool, but ever since Musk’s takeover bid, it’s gotten worse, in part because of the online quarrels over the purchase. It’s toxic and sh*tty, and even for an entertainment website like ours, its utility is limited save for its ability to give us a real-time glimpse into the (often) petty woes of Film Twitter (Twitter is not, and never has been, a significant driver of traffic to almost any site).

I wouldn’t mind seeing Musk fall on his ass and pay a premium for the opportunity to do so. So does … Twitter. After initially attempting to thwart Musk’s takeover attempt, the company — and especially its shareholders — has embraced the takeover because they’re like, “$54 per share is a sweet deal!” That’s especially true for a company that’s only managed to eke out a profit in two of the last eight years. If Elon Musk thinks he can roll back all of the site’s moderation and remove most of its advertising without losing half its users and a lot of revenue, let’s see him try!

That’s why yesterday, Twitter told The New York Times that it has every intention of forcing the deal: “The board and Mr. Musk agreed to a transaction at $54.20 per share,” Twitter’s board said in a statement. “We believe this agreement is in the best interest of all shareholders. We intend to close the transaction and enforce the merger agreement.” Twitter also filed a statement yesterday saying that the company “is committed to completing the transaction on the agreed price and terms as promptly as practicable.”

Hell yeah it’s in the best interest of shareholders, who would see the price of the stock fall even lower if Musk backed out of the deal. The company, however, is determined not to let that happen. The deal that Musk agreed to not only included a $1 billion termination fee but a specific performance clause that also allows Twitter to sue and enforce the deal. In other words, as long as there is not a material breach (and nothing about this “bot war” falls under that category), Twitter can make Musk buy Twitter at $54 per share.
Wouldn’t that be ironic?

← 'Hacks,' 'Barry,' And Dustin Reaches New Heights Of Villainy On Podjiba! | Pepsi-Roni Pizza Is A Thing That Is Happening →