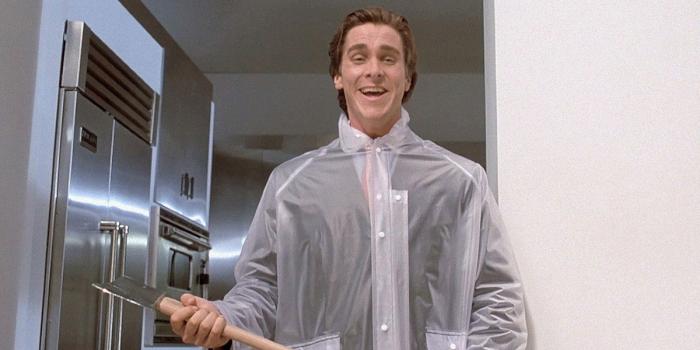 The Kind of Friends You Should Have By Age 30

This tweet was making the rounds yesterday. Let me preface by saying how disheartening it is to see it reap 35,000+ likes as of publishing this, even if it’s from paid engagement: 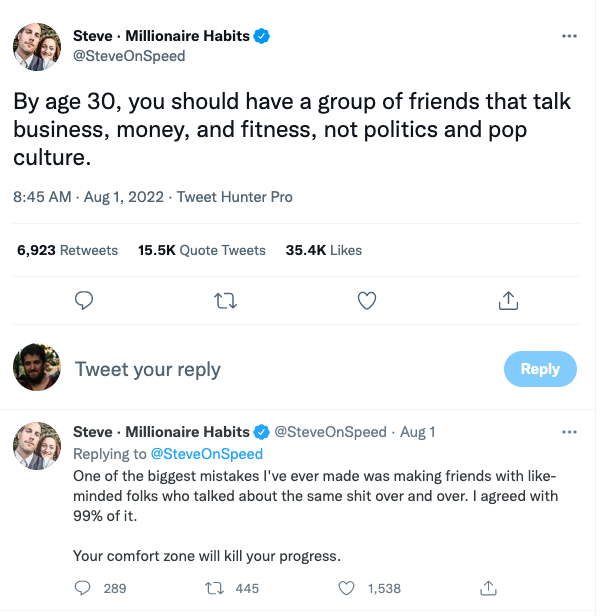 Every once in a while, there will a person who will make such a proud and neatly packaged display of their limitations that the only right thing to do is clown on them, mercilessly. Of course, with Twitter and the New York Times guest column section this is something that happens every day, but it’s been a while since we have found a true specimen of the douchebag finance bro, probably because their Crypto losses prevented them from paying their Internet bills (#InternetIsAUtilityIsAHumanRight). Good Twitter wasted no time, first, trying to reason with him: 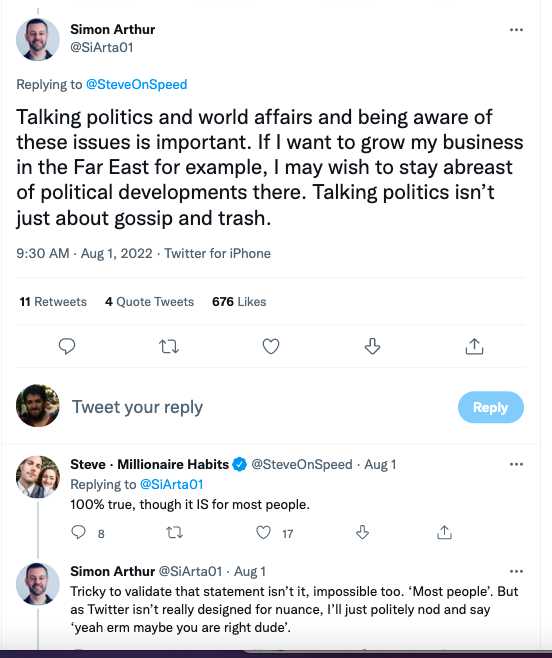 Sometimes you have to remind yourself that these people exist; poorly written characters are not the exclusive province of Netflix teen-shows, they exist in real life. When these limited characters expose themselves with so little self-consciousness, you have two choices:

1) Make a display of your own self-righteousness, and give that person a lesson on The Things That Matter in Life, Critical Thinking, and/or Basic F**king Humanity. And though commendable, you have to ask yourself, who are you writing this for? 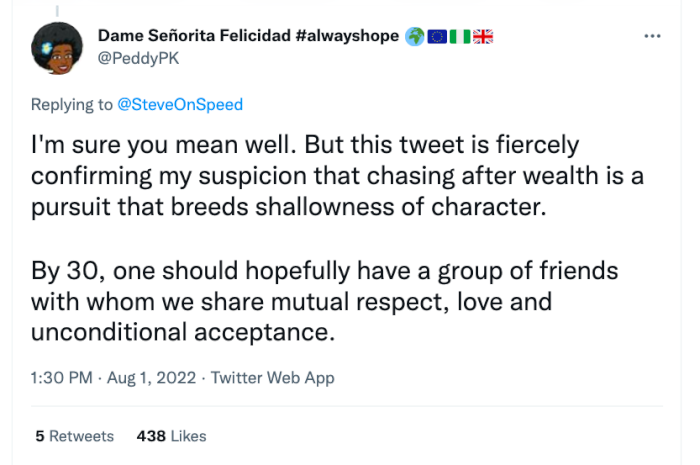 But while you spend time replying, whether it’s a 10-second quick response or something you mulled over for most of the day, the one thing you forget about is that when people make such a wanton display of dickishness, is it strategically worth it to try and change their minds? Can you reason with them without making you the clown? 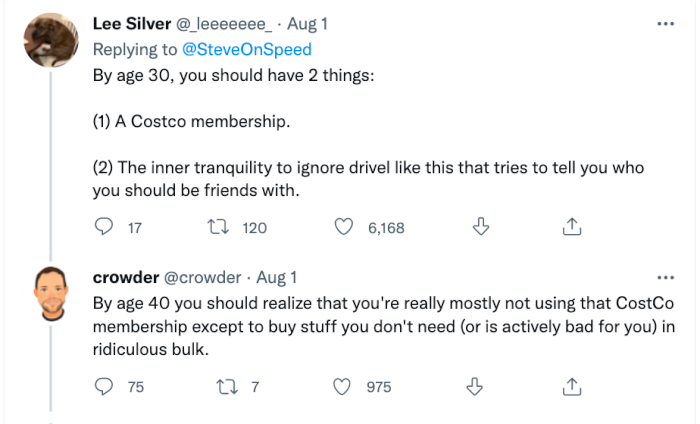 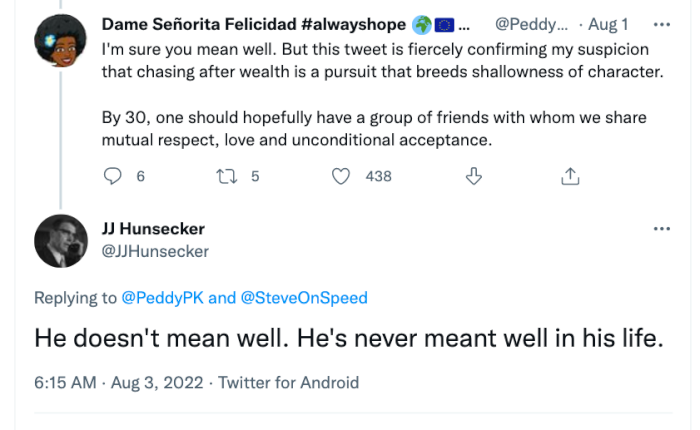 (Of course, this is a much lower grade of clownery, a… kind, non-scary clown compared these Pennywise motherfuckers).

The problem is that you can’t reason with people who are convinced they have everything figured out: 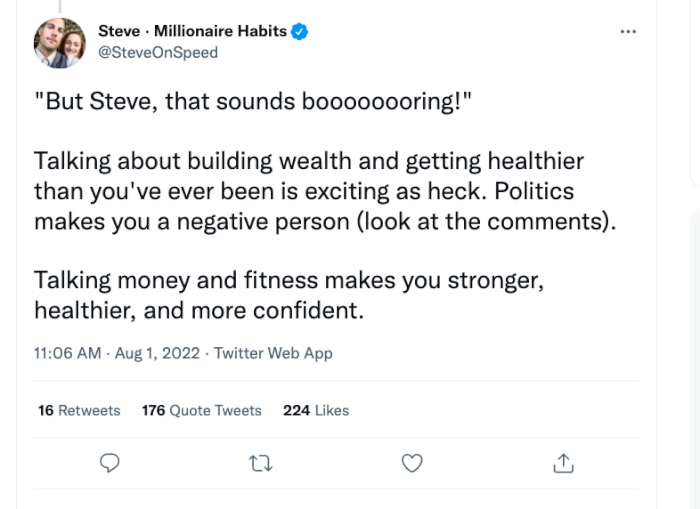 So then you have the second choice:

2) Clown on them, take them down a peg just mocking the living hell out of their gross lack of humanity, because it is a truth universally acknowledged that a terrible person is defenseless against precision-guided jokes. For the record, every good joke is a precision-guided joke: 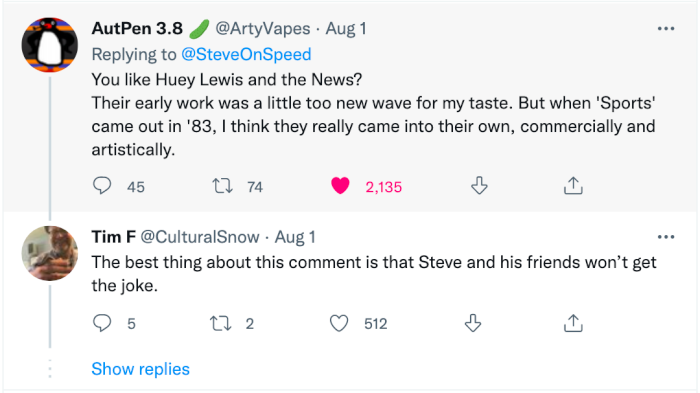 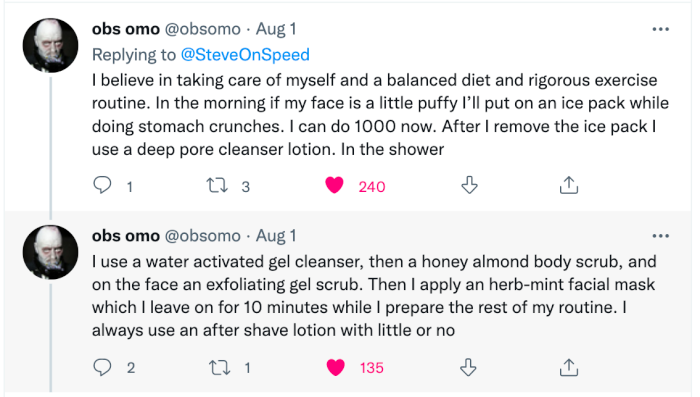 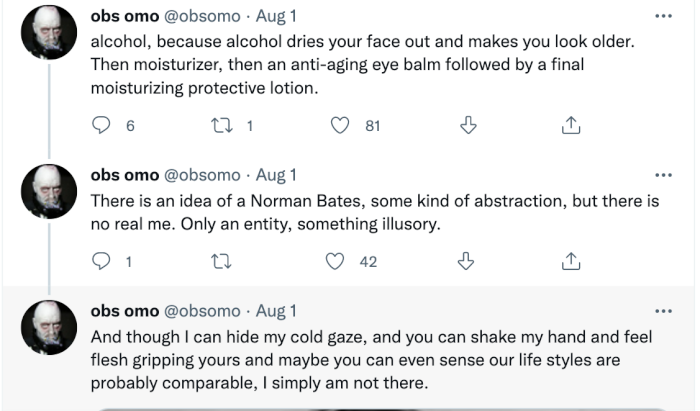 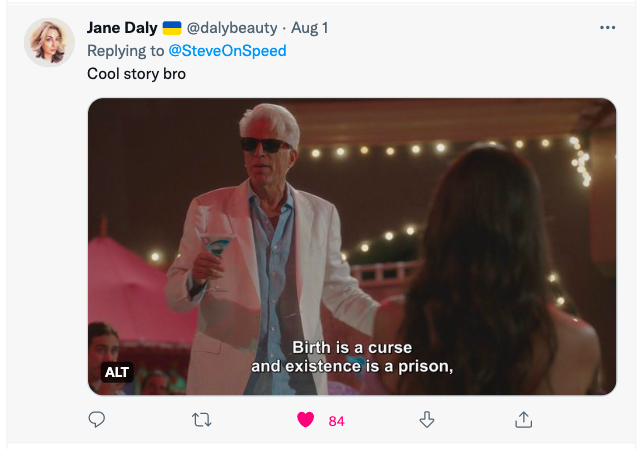 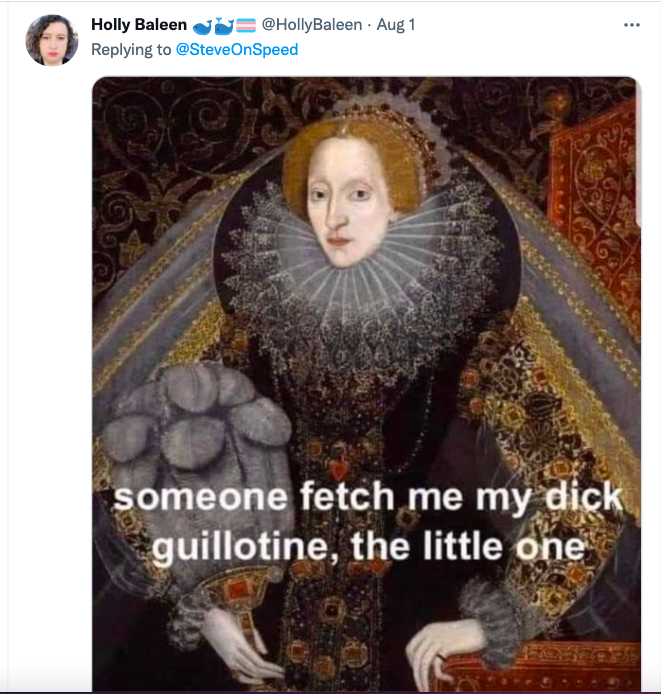 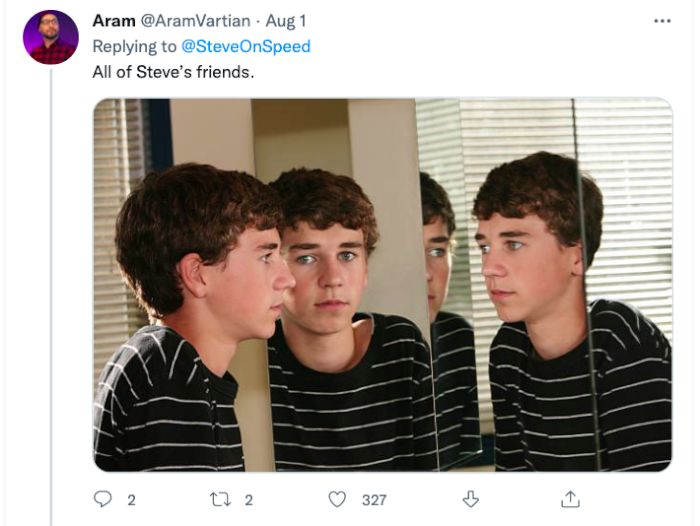 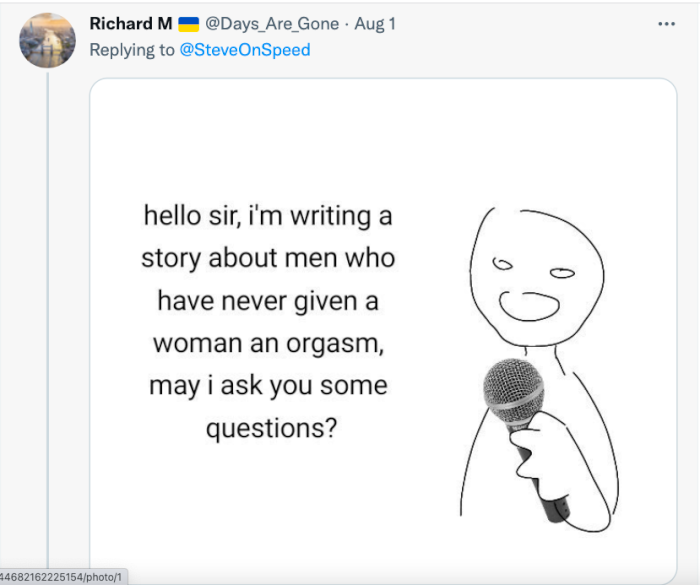 And thank the gods of Democratic Socialism that these people exist, because this is not just the best way to knock down the self-important but because there are more than enough of us who feel unaccomplished and will read this as another crack in our armor. Not because we want to be like this guy but because motherf**kers like him are still succeeding, still getting platformed, and having an objective leg-up in this shitty, shitty economic system: 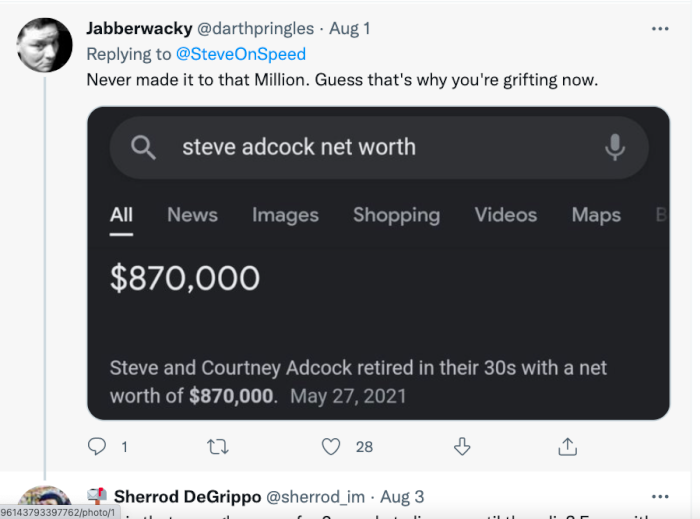 But even with all the well-placed jokes in the world, reality still slaps you with the fact that grifters like this guy are still thriving, or will find a way to thrive because they have the privilege, the lack of ethics, and the lack of self-consciousness to the point that they don’t know what “Steve On Speed” means, so they make it their Twitter handle. Or that they are just making a xerox of a xerox of a cliché: 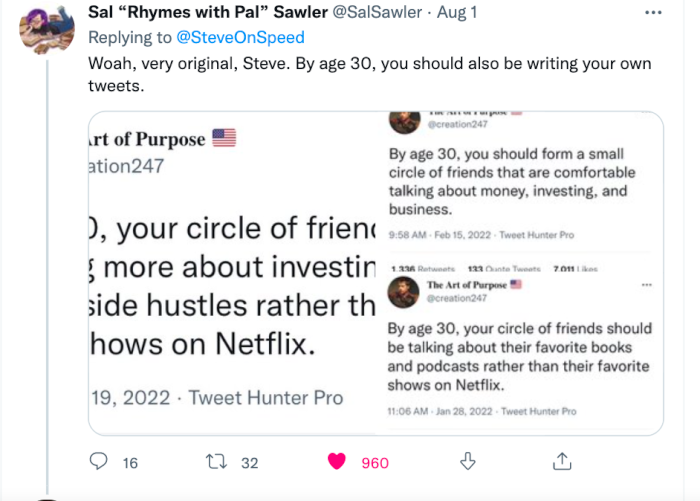 This idiot is simply a very vocal version and the logical outcome of capitalist self-help. They are its propaganda shock troops in a way. There are more popular, softcore versions like that Gary Vee guy. But they are all orbiting around a single idea that somehow they think it’s a virtue: Misery. Almost like that is their… business (second Paramore reference in a week!).

And yet, is it any consolation to know that these people are, by definition, miserable? Does it matter that deep within their brains, underneath hours of repetitive podcast talk, they know they have nothing to offer? Because that doesn’t make us any less broke.

Sometimes it’s exhausting that the only thing most of us have in our 30s is good memes and tactical cynicism.


← Taron Egerton is a Force in Apple TV+'s Riveting Pressure-Cooker, 'Black Bird' | Gather 'Round and Laugh at Dumbass Grifter Hunter Moore, 'The Most Hated Man on the Internet' →