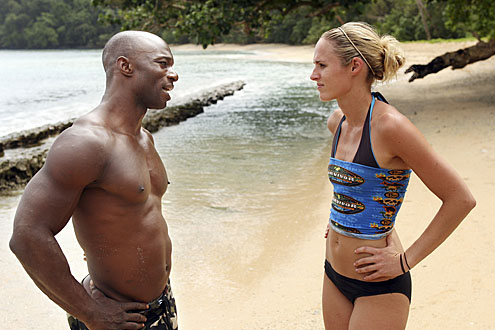 A lot of days, we wake up, we look at the shape of the country, and we look at the online discourse, and it can feel dispiriting. When you check the Twitter feed of the President of the United States, it feels like we’re getting our asses handed to us. We haven’t made as many gains as we’d like, so culturally it can sometimes feel like we’re fighting a losing battle. I check Twitter and see some of my favorite people on there — people like Roxana and Courtney — vacillating between exasperated and exhausted. Courtney and Roxana and thousands of other women and people of color have been out there fighting this cultural war every goddamn day, and I’m sure that on most days, it feels like pulling goddamn teeth.

What I don’t think they sometimes see or appreciate, because they are so close to it, is just how many of those teeth are missing now.

It’s going to sound facile, maybe, but let me offer the reality competition Survivor by way of example. It’s been on for 20 years. Last season, there was a lot of controversy surrounding how poorly the producers of the show handled a player, Dan Spilo, who paid unwanted attention to a few of the female players. He wasn’t grabbing asses and boobs or anything as overt as that. He was holding on to a players’ foot, or putting his arm around their naked waist, or caressing their face. It was uncomfortable attention. One of the women, Kellee Kim, complained about the unwanted attention on camera, which was actually included in an episode. The producers warned Dan Spilo but didn’t kick him out of the game until a few weeks later when he did the exact same thing to a crew member on Survivor.

The online world, of course, rightfully complained that, if they’d listened to Kellee Kim in the first place and kicked Dan Spilo off, none of this would have happened. They’re absolutely right, and no one is giving Survivor any gold stars for eventually booting the player.

However, in preparation for this 40th season of Survivor where 20 past winners return, my family and I have been watching a lot of old episodes, and let me tell you something: The shit that Dan Spilo pulled in season 39 that got him booted off? Five, six, seven years ago? It was rampant, and no one said a word (and if they did, it sure as hell didn’t make it to air). One of my favorite players ever was a guy named James. He is Black. He is a “gravedigger” (his family actually owned a cemetery), and, Holy shit, he looks like f**king Adonis. The way some of the white players talked to him, however, was fucked up and uncomfortable. But also, the way he called the women “Darling” and “sweetie” was also condescending. But nobody called that shit out, either. Ten years later, and the way those players spoke to one another — the language, the microaggressions, the tone — would be called out on every entertainment website on the Internet, and those players would have been shamed into oblivion. I’m sure, too, that some of those players watch those old episodes now and cringe at the way they spoke.

There was also a player named Colton. He appeared on a season in 2012 and returned in 2013. He was straight-fucking racist. The most racist player I’ve ever seen on the game. He was once asked if he knew any Black people, and he was like, “Yes. Of course. I know plenty of Black people.” And they were like, “Who?” And he said, “The help.” HE SAID THAT ON NATIONAL TV after repeatedly and viciously calling a Black player “ghetto trash.” He was a racist horror show, and for whatever reason, Survivor and America collectively let him slide because he’s gay.

That was eight years ago. If that happened today, he’d be removed from the game immediately, and if he weren’t, Survivor would run off of television. There are so many instances in old seasons — from just seven or eight years ago — where I think, “Oh, that shit would never fly today.” Last season, there was an episode of Survivor where a Black player had a lengthy conversation with a white player about why it wasn’t OK for him to call his buff a “do-rag.” That conversation would not have happened in 2016 or even 2017. It just wouldn’t have.

This piece isn’t a celebration of criticism of Survivor, however. It’s taken me a long time to get there, but the point I’m trying to make is that our culture has evolved a lot in the last few years, and it’s because of “social justice warriors” like Courtney and Roxana (I don’t mean to keep singling them out, because there are scores of other amazing cultural critics both here and elsewhere that do what they do, as well; they’re just the two most immediate in my orbit and the most outspoken on Twitter and also, I love them). They have gradually — despite daily exasperation and exhaustion — pushed our culture to a place where a hugely popular reality-competition series on network television is having conversations about unwanted touching and “do-rags.” Yes, we have a lot further to go, but it is amazing how far women and people of color have brought us while simultaneously doing battle with the most backward-ass political environment in decades.

But now? A lot of very brave women came forward. A lot of journalists listened and wrote about their stories. A lot of cultural critics analyzed, processed, and insisted. The way that the culture talks about consent changed, and in a relatively short period of time — the time it takes for someone to lose his job, be investigated, be indicted and put on trial — that change was reflected in the legal system. Harvey Weinstein was convicted because a jury of five women and seven men listened to the women on the stand recount their horrific stories, and they believed them.

Again, it’s hard to see because it’s so close, but it’s pretty goddamn remarkable how so many women (and Ronan Farrow) have slowly, meticulously brought about real cultural and institutional change in the last four years. It’s great to see Harvey Weinstein put in prison, obviously. But what it represents is a profound shift in America brought on by thousands of raging voices.


← 'Love, Simon' Series Spinoff Moves From Disney+ to Hulu Because of 'Mature' Themes | Hank Azaria Explains Why He No Longer Feels Comfortable Voicing Apu on 'The Simpsons' →