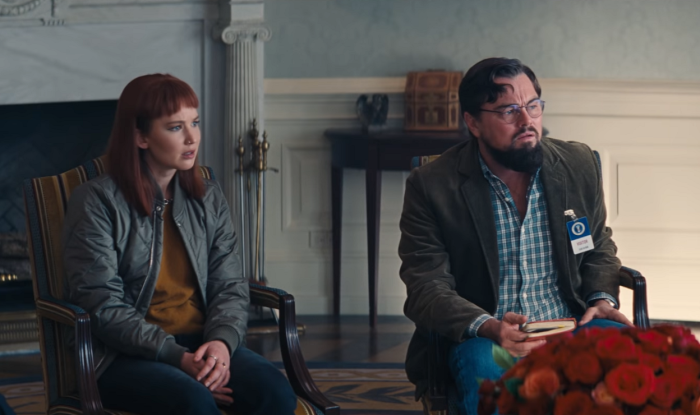 Recently, the UN found that there is ‘no credible path’ to keeping global temperature rises to below 1.5 degrees. All the reasonable, gradualist methods that we had at our disposal, and that would have kept the world beneath this crucial benchmark of heating, have failed. Or rather: political interests, in hock to corporate profit, have failed us, by not implementing those methods. Now, the UN lays out, the only way to avoid the worst of the disaster to come is to enact a ‘rapid transformation of societies’. This shouldn’t be news, of course, as the alarm bells have been sounded over and over again, with the IPCC warning issued last year being just one example.

We know what the consequences of a rise above 1.5 degrees will be. What they are. They are already happening. A third of Pakistan was underwater this summer, with devastating floods washing away millions of homes and leaving 10 million children in need of lifesaving support. Four consecutive years of failed rains have brought Kenya, Somalia, and Ethiopia to the brink of disaster—with 22 million people at risk of starvation. Bangladesh has been stricken with the worst floods in a century.

Though the disasters are knocking on our doorsteps in the Global North too, the most striking feature of capitalist climate change is the fact that those least responsible for it are the ones suffering its consequences hardest, and first. Pakistan, the country facing probably the most dramatic climate disaster this year, has emitted only 0.4% of global carbon emissions since 1959. Not only has the Global South suffered the most extreme, prolonged, violent levels of pillage, subjugation, and exploitation at the hands of the capitalist empires of the Global North, it will now have to contend with the chickens of that exploitation coming home to roost. We plundered the Earth and abused its generosity, and the backlash will be apocalyptic. Those who had the smallest hand in bringing it about—and those who are as a result the least prepared for it—will be hit the worst.

And what has been the reaction of the media in the Global North? It’s been a roller coaster. We’ve moved through stages of denialism, ridicule, slander, and more—only to land at something that now looks at least a bit like acceptance. Something that looks, if you squint, like progress, as at the very least we can’t pretend to be ignoring the issue anymore—it’s gotten simply too big and un-ignorable.

You might think that by itself that should lead to a greater maturity of debate.

Enter ‘Good Morning Britain’, TV channel ITV’s flagship morning show, AKA ‘those guys who did that Don’t Look Up impression while wildfires raged in the UK that in the summer.’ Here they are again, those cheeky scamps, helping to hasten the mass death that is racing towards the planet! What’re they like! This time they’ve brought on to their show a doctor who has been taking part in some of the Just Stop Oil protests that have been disrupting the order of things to varying degrees here in the UK. They’ve thrown art on glass-covered paint (huge media coverage), spray-painted buildings owned by Rolex and MI5 (medium media coverage), and blocked oil transports by scaling bridges (minimal media coverage). I’ve had some issues with a few of the specific tactics that the group has used—and their funding source warrants comradely scrutiny at the very least—but the fact of the matter is that by and large these are ordinary citizens willingly subjecting themselves to the violence of the state, the media, and their fellow citizens, all in the name of bringing attention to the biggest issue facing us all now—and one that’s being criminally neglected, and exacerbated, by the powers that be.

‘Criminal’ is the key word here, and it’s one used by the doctor on GMB when describing the government and their woeful record on climate change. And how do the presenters of GMB react to a man clearly driven to the point of absolute desperation by what he has seen during his professional experiences working with vulnerable communities around the world venting some frustration at the government? 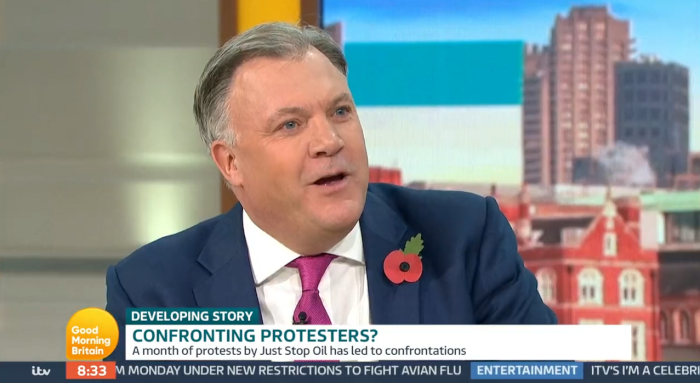 That’s the face of Ed Balls, one of the two presenters on GMB, frothing at the mouth in sheer gammon rage at the idea that someone call the Tory government ‘criminal’. Ed Balls, the former New Labour politician who served as Secretary of State for Children, Schools and Families, and as Shadow Chancellor of the Exchequer in the 2000s and 2010s. Ed Balls who, after his political life came to an end, began a campaign to reinvent himself as an amiable TV personality by appearing on The Great Sport Relief Bake Off and Strictly Come Dancing. Ed Balls, who described Jeremy Corbyn’s leadership of the Labour Party—the same leadership that swelled the ranks of the party to make it the largest political party in Western Europe, that led to the biggest swell of grassroots support, enthusiasm, and hope for actual, substantive change in generations, and which came within hair’s breadth of coming to power, only being stopped by internal right wing sabotage and the most extraordinary propaganda campaign this country has ever seen—a ‘leftist utopian fantasy, devoid of connection to the reality of people’s lives’.

Ed Balls. Like most Labour politicians: not a serious individual, but a dangerous one nevertheless. Now he’s through being dangerous as a politician he’s made sure he can carry on being so while taking a nice media paycheck instead. Do you enjoy the feeling of your blood boiling? Good news, here you go:

Don't Look Up was less on the nose than this.

DR: "People are dying right now, children are starving and our planet is dying before our very eyes"

We are so doomed https://t.co/zeaoPUEVqp

Don’t Look Up was a sh*t film, and damn is it annoying that it keeps proving a useful, quick reference. I think I might resent the media even more for that, for making me look up screenshots from it over and over again. I mean, the whole ‘bringing on the apocalypse’ thing is bad, but come on.


Image sources (in order of posting): Netflix, Twitter/ITV
Most Viewed