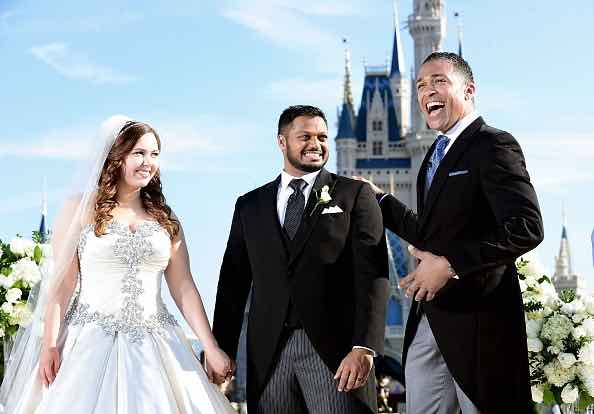 If you haven’t seen it yet, an Am I the Asshole? post from Reddit began circulating on social media yesterday. As is typical of these posts, the person writing it was definitely the asshole, although this one raised more hackles than usual.

In short: A man and his wife were grousing because some of the guests at their wedding were complaining because they were not served food. The couple decided to use the money allotted for catering — the food and drinks — to instead feature a half-hour appearance by Mickey and Minnie Mouse on their special day. The couple, however, believed that they were in the right because hungry guests could still order from the restaurant menu (and pay for it themselves) or, uh, use the vending machines conveniently located throughout.

If I went to a wedding like this, I too would be talking shit about it… fuck you mean you’re not providing catering??? At a WEDDING?? pic.twitter.com/12OMKlQogu

The AItA generated about 24 hours of apoplectic responses, as the entire Internet piled on this couple for prioritizing facetime with people in branded costumes over the hunger of their guests. This was fine.

Then a religious studies professor from Lehigh University decided to get involved, and well, things quickly went to hell when she suggested that the Internet should not make fun of this couple because to do so was tantamount to … religious persecution. No, I am not making this up!

The entire thread is here, but for readability sake, I’ll just paste the text below:

I’m a religion studies professor researching Disney and I’m here to tell you why to stop pathologizing Disney adults, trending again because of this post. Disney Fairytale Weddings have been a thing since the 1990s. Disney already had a huge honeymoon market and decided to go for weddings. Thousands if not millions have married or honeymooned at a Disney park or on a cruise. What does this have to do with religion? Many of the Disney fans I have observed in person and online find immense meaning in the parks. People don’t just marry at Disney. They mourn lost relatives at Disney. They go to Disney to celebrate surviving cancer. They go there for one last trip before they die. Religion is a way of making meaning in the world through stories and rituals. It is about a network of relationships with the human and non-human. It is about making homes and confronting suffering.

All of this happens at Disney. Cast members literally welcome you “home.”

Is this capitalism? Sure it is. Is it also at least quasi-religious? Yes. (And by the way, most religions are intertwined with capitalism. Just ask one of the founders of sociology, Max Weber). Disney owns our stories. For some people — both those who have another “traditional” religion and those who don’t — the promise of magic at Disney and the feelings they get there are powerful. I’ve seen people cry at the fireworks. Many times. (Incidentally, the latest firework show goes “The magic is calling— answer the call!” an altar call if ever there was one.)

Would I want to go to a wedding with no food because the bride and groom wanted photos with Mickey? No, no I would not. But when they say Disney is a big part of their lives I take that seriously. Maybe they met there. Maybe the IDEAS the Mouse stands for bring them joy. Maybe it’s the only place their parents ever acted happy. Or, yeah, maybe they are selfish. But if we measure religion not by its truth-claims— because we CAN’T assess those unless we have something much more powerful than a Ph.D— but by its power in people’s lives, then Disney is as much a religion as anything. It is at the very least a site of meaning and human fellowship, even you hate it. Dismissing it because it’s “kid stuff” is demeaning to children, who are themselves discerning humans.

This couple left their guests hungry and it was, perhaps, unwise and lacking in guest/host hospitality— as
@tressiemcphd pointed out, they broke a social contract in a public way— but it hurt ONLY their guests. I can think of a ton of people in hurting a lot more Americans. It’s late capitalism on steroids but so are a million other things. So stop pathologizing other people’s joy. There’s little enough of it in this world.

Her belief that Disney adults’ love of Disney is tantamount to religion is probably not wrong. We treat a lot of things in this country with religious fervor: The Second Amendment, Johnny Depp, Joe Rogan. But also: If the Disney venue is your “church,” and you are inviting people into your “church,” you should feed them instead of paying a guy to parade around for half an hour dressed as Jesus. Those people are not the real Mickey and Minnie. They are false prophets! Now please, provide these people with some bland chicken and a subpar vegetarian option! It’s what Walt Disney himself would want!

I'm going to stop pathologizing disney adults immediately, and start religiously persecuting them instead. Thanks for the tip. https://t.co/OH83jZQyaR

"For Disney Adults, Disney serves as a sort of, proto- or pseudo-religion."

"And that's why you shouldn't make fun of them".

I'm not going to link the thread but if thinking/saying "You shouldn't make fun of Disney adults because Disney is like a religion to them" does force your brain into a bluescreen, you need to log off forever