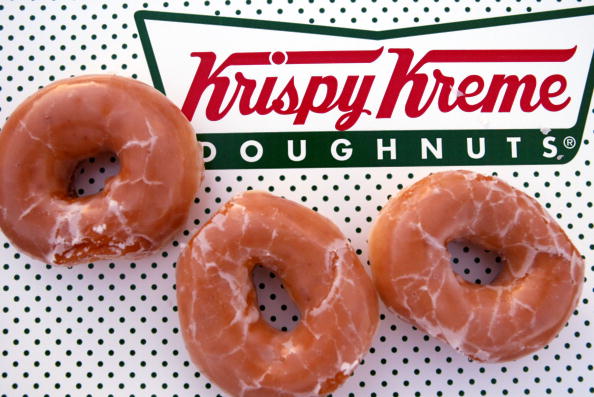 Krispy Kreme Is Giving Away Donuts for Vaccinated People! What Could Go Wrong?

I don’t know if the ad campaign, “What would you do for a Klondike bar?” even runs anymore, but it says something about how deeply entrenched in our culture that it is that my son will often ask me what would I do for a Klondike bar, and the answer is always very simple: I am an adult, and I have money, and if I really wanted a Klondike bar, the most I would do is walk around the block to the local pharmacy and part with $1.50 or so in exchange for a square of decent vanilla ice-cream inside of a chocolate ice-cream shell. Klondike bars are not free, but they are not exactly a luxury. There is no need to splurge for a Klondike bar. It is there, in the ice cream and novelties aisle in any grocery store anytime a person with, say, a job and a means to travel to the store and back wants one. If the Klondike bars were free, it is unlikely that I would expend any more of my energy securing a said bar than I would if it were $1.50.

This brings me to Krispy Kreme, which announced a promotion yesterday in which they’d give away a free donut every day for the rest of the year to anyone who came in with their vaccination card. This is a wonderful way to encourage folks to get their vaccines, it promotes goodwill for the donut company, and it will almost certainly generate the company additional revenue because no one goes to Krispy Kreme for just one donut. I suspect the average order of a single person is two donuts and a cup of coffee, and even if you gave one donut away for free, the company is still going to earn a profit. Corporations don’t do things without a profit motive.

All of which is to say: Good for Krispy Kreme. And also, this tweet — and others like it from health professionals — is bad. They are very bad.

First, if someone indeed eats an Original Glazed #KrispyKreme donut every day as your offer provides, and changed no other aspects of their diet/exercise, they'd gain approximately 15 pounds by the end of 2021.

As a public health expert, I can't endorse a diet of daily donuts. Still, I appreciate @krispykreme's out-of-the-box thinking & hope that other companies will join in to incentivize #vaccines.

Wow, buzzkill! You know what’s worse than gaining 15 pounds between now and the end of the year? Being unvaccinated, contracting COVID-19, and spreading it to all of your unvaccinated friends.

Hey - you know how you encourage eating disorders and fat phobia? By shaming people for eating a single donut from Krispy Kreme after getting a vaccination. One donut won't kill you - COVID will.

Some of the responses to the #KrispyKreme donut vaccine debate really have me thinking about how paternalistic #publichealth and #medicine can be. We’re in the midst of a pandemic. Are we really upset over incentivizing vaccinations with donuts?

Why are people acting like Krispy Kreme is mandating daily donut eating? Good grief, they’re trying to do something nice to incentivize vaccines and donuts are pretty much all they have to work with.

I would also circle back to the Klondike bar question. Unless you live next door to a Krispy Kreme, you really love their donuts, and you are determined to be a nuisance, you’re not actually going to eat a free donut every day. They are $1.09. That’s not as cheap as “free,” but the cost of a Krispy Kreme donut is not an impediment to eating one daily for most folks.

It reminds me of another promotion. I will mention my son again here, because he is brilliant and amazing, and his birthday is on July 11th, which means that he can get a free Slushie from 7/11 on his birthday every year. How many times has he actually taken up this offer? Once, I think? Maybe twice. It’s a cool novelty for him, and it’s fun to say, “I got a free Slushie on my birthday,” just like it might be fun to say, “I got a free donut for getting vaccinated!” If 7/11, however, gave free Slushies away every day to those people born on July 11th, it’s unlikely that my son would have taken advantage of such a promotion anymore than he already has, which is practically never! And if he really wanted a Slushie, I’d just buy him one.

All of this, of course, is another reminder that: The internet is terrible, and please do not let it stop you from enjoying your lives.

← Stephen Colbert Released His Own Hilarious Cut Of 'Justice League' | One of Hollywood's Biggest Paparazzi Agencies is Going Bankrupt But No, It's Not Meghan Markle's Fault →