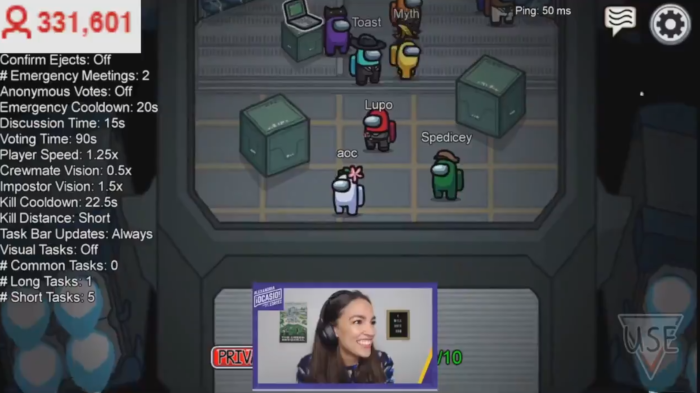 'You Guys Can Call Me AOC. Mike Pence Can't Call Me AOC.': Just Some Highlights of Alexandria Ocasio-Cortez Streaming 'Among Us'

For those of you who might not be aware, Among Us is a game. A free-to-play online multiplayer game available on Android, iOS, and Windows, in which you and a bunch of friends play the role of a spaceship crew running around your spaceship, trying to maintain it. Lest that sound a little bit banal, the twist is that one of you (or more, depending on the overall team size) is an ‘Impostor.’ The Impostor’s role is to try to murder all the non-Impostor crewmates one by one in the twisty and cramped hallways of the ship, all the while remaining undetected, unsuspected, and sabotaging the ship and sowing doubt and confusion among the crew as to who the real Impostor might be. That’s another key part of the game: Every time a body is discovered, the normal gameplay pauses and the players are placed into a discussion forum in which they try to figure out who the Impostor among them might be. Whoever the plurality votes for gets ejected out of the airlock and the game lets everyone know if they caught the right person or not. With each new body and with each wrong person ejected, the atmosphere of paranoia and mistrust ratchets up wildly. Think of the feeling present in John Carpenter’s The Thing and you won’t be far off. If the Impostor kills enough people or sabotages the ship enough, they win.

Developed by studio InnerSloth and originally released in mid-2018 to minimal attention, Among Us has seen an almost exponential explosion in popularity in the latter part of 2020 thanks to a variety of big-name YouTubers and Twitch streamers—first in Brazil and South Korea, and then a bit later America—picking up on it. As of September 2020, the game has had over 100 million downloads. Aside from the streamer boost effect, many people have highlighted how the game’s highly social nature would have helped it gain in popularity during a global pandemic that has isolated so many of us and deprived us of our usual social networks. Among Us has busted through the barriers of the traditional gaming world now, with memes inspired by the game spreading far and wide, and with a sitting United States congresswoman deciding to use it as a platform for encouraging people to vote ahead of the upcoming Presidential election. That’s right, here’s Alexandria Ocasio-Cortez, putting out feelers on Twitter a few days ago:

Anyone want to play Among Us with me on Twitch to get out the vote? (I’ve never played but it looks like a lot of fun)

Considering how hugely popular AOC is with younger demographics, the call was answered with a predictable amount of enthusiasm, with some of the biggest names in gaming (and politics) raising their hands with a desire to join in, or just voicing support:

I offer myself as tribute. 😁

I would love to help make this happen

I will play! I can be quite the imposter pic.twitter.com/gfrkJxs6eK

You are at zero shortage of offers but hey if you need a last minute fill I'll drop everything. 😭 Would have to stream that ish on the YouTubes: https://t.co/XZgfQpqauD

You need an imposter?? Count me in pic.twitter.com/QcIASiSKc2

I'm planning to stream some in slightly over an hour. Would love to have you on with us. We've got several newbies joining us tonight.

I'd love to if you're down!

Yes yes yes would love it! I’m totally on board to make this happen!

Hi! You are very cool, I admire you a lot, are probably far better at any video game than me, and I would love to play among us with you any time!

And then, last night the announcement dropped:

Join me, @pokimanelol, @hasanthehun, & more on Twitch TONIGHT as we help folks make a voting plan at https://t.co/TskRLfhCt3 and officially declare orange sus on Among Us 🍊

My two boys watching @AOC & @IlhanMN on Twitch playing Among Us. They think this is the coolest thing ever & are trying to convince me to get with the program. https://t.co/4MssdBltWg pic.twitter.com/JOgBiur6P3

The stream was an insane success.

what an incredible night. more than half a million people tuned into watch a record breaking #gotv effort we put together in less than 24 hours which started with a single tweet by @AOC - i hope you boomers are paying attention.

It was such a blast.

Super grateful to @AOC @hasanthehun and all the amazing gamers for a fun night. Poggers (am I using that right?). S/o to @isaiah_kb for my set up.

.@IlhanMN is LIVE and got killed in the wrong game https://t.co/7G4LGzXp2G pic.twitter.com/5ME2kUOdpK

Let the record show that @IlhanMN DID NOT vote for @AOC #Squad pic.twitter.com/gd3mg0HFFF

.@aoc figures out @IlhanMN is the imposter pic.twitter.com/8Nsci6LGdy

"We don't know what you've been doing @hasanthehun" @IlhanMN 🔥🔥🔥🔥🔥 pic.twitter.com/kDVXJZag8m

.@hasanthehun and @AOC discover @IlhanMN AND GET THE W pic.twitter.com/N0KWEPCUTZ

"Why is she not killing when she's on my team but every other game she's maniacal" @pokimanelol and @IlhanMN pic.twitter.com/8Q73yVZCM5

"Imagine showing up to the doctor and just saying you need help and getting it. One of the reasons it's so hard to advocate for a system like that in the US is because people don't believe it's possible" @AOC pic.twitter.com/tnFJprFB1l

(Minor note: The Tories do want to get rid of the NHS. But that’s a story for another time.)

.@IlhanMN ends her night with "Don't forget to make a vote plan and vote!" pic.twitter.com/Fl9ZlYaHaK

.@AOC closes out the night. Don't ask people "are you going to vote" ask them "what's your voting plan?" pic.twitter.com/ciSilw8an2

← History Channel Pulls 'The Chop' From TV For Investigation Into Contestant's Nazi Tattoos | Now on Netflix: 'Over The Moon' Brings New Life And Coping Tools To A Chinese Legend →